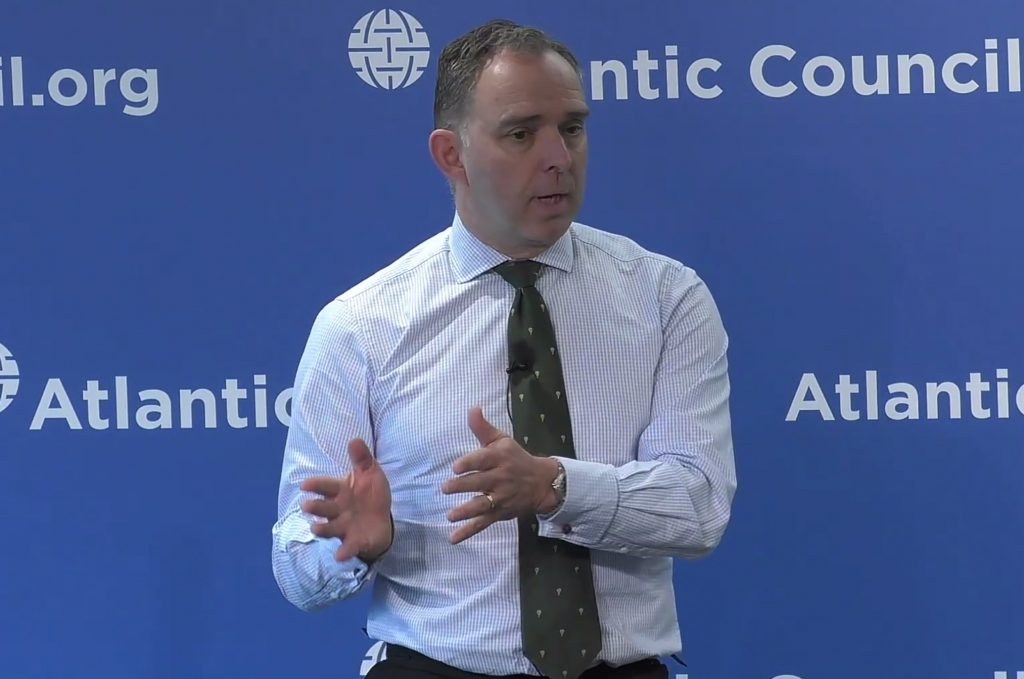 It is critical for allies to work together in the face of global challenges to democratic values and principles, Mark Sedwill, national security adviser to British Prime Minister Theresa May, said at the Atlantic Council in Washington on March 8, while emphasizing the singular importance of the United States in such an endeavor.

“We will face those [challenges] most successfully if we face them together, and in facing them together we will always need to face them with the US playing a central role,” said Sedwill, who also serves as Cabinet secretary and head of the civil service in the United Kingdom.

In his opening remarks, Atlantic Council President and Chief Executive Officer Frederick Kempe emphasized the importance of transatlantic cooperation, especially between the United Kingdom and the United States.

Sedwill’s remarks on US leadership on the world stage come at a time when the United States under President Donald J. Trump has taken an increasingly inward-looking approach, underscored by the president’s America First philosophy.

Across the Atlantic, Sedwill’s own country is grappling with the challenge of Brexit—the United Kingdom’s decision to leave the European Union—the deadline for which is coming up on March 29 with no clear outcome in sight.

Sedwill pointed out that May, who faces a key parliamentary vote on March 12 on revised her withdrawal agreement with the EU, has noted that the United Kingdom is at a decisive moment. “She has been clear… that essentially the choice boils down to that deal, or leaving without a deal, or potentially not leaving at all,” he said.

Kempe said: “Regardless of which Brexit path the UK choses, one thing remains clear: our bilateral relationship has contributed much to the safety and stability of the Western alliance and the wider global system, and surely will play a role in both governments’ navigation of the complex set of global challenges we face today.”

“What’s needed now is a forward-looking strategy… embedded in a broader Atlantic alliance to adapt this relationship to the very real set of complex 21st century challenges,” he added.

In a conversation with the Atlantic Council’s Executive Vice President Damon Wilson, Sedwill emphasized that while the United Kingdom may be leaving the EU, it is not leaving Europe. Furthermore, he said, “there is a very strong appetite for the UK to maintain its leadership role” on EU policy in the Western Balkans and Europe’s east.

“We remain completely committed to the security of the Continent. We will work in the closest possible alliance with our partners in the EU and our allies in NATO, and we will find new ways of doing so,” he said.

The United States will host foreign ministers of NATO countries in Washington on April 3 and 4, the seventieth anniversary of the funding the Alliance.

US allies have faced considerable pressure from Trump to meet the target set at NATO’s Wales Summit in 2014 to spend 2 percent of their GDP on defense.

Sedwill credited Trump’s hard-nosed approach on defense spending with having pushed allies to up their defense spending. This effort, Sedwill said, “has actually achieved a great deal so far. There are significant commitments coming through… There’s a very significant uplift in defense expenditure and capability.”

“It is a story of success and the president should take some pride in that,” Sedwill said, referring to Trump.

On the question of US-UK synchronization on operations in Afghanistan and Syria—two countries on which Trump has made mixed statements on the presence of US troops—Sedwill said: “No one wants to have our troops in any of these theaters in greater numbers or at greater risk than is necessary to achieve the mission.”

“The focus is to deliver the mission,” he said. In Syria, this means eradicating ISIS’ “territorial caliphate,” while in Afghanistan ongoing US-led peace efforts with the Taliban are evidence that “the trajectory toward accomplishing the mission will remain up.”

“There will always be challenges and there will definitely be setbacks, but we remain completely committed to achieving the mission,” he added of the situation in Afghanistan, where he formerly served as the British ambassador.

On China’s growing role in Europe—a role underscored this week by the expectation that Italy intends to endorse Beijing’s Belt and Road infrastructure initiative—Sedwill described China as a “huge economic partner” and the relationship as “complex.”

With China, he said, “it is important that we take a consistent, and respectful, position where we are very clear about defending our own national interests.”

In his opening remarks, Sedwill laid out what he sees as the three big global trends that will affect the context in which countries operate: the shift in global economic power from the Atlantic to the Pacific, the Fourth Industrial Revolution and significant democratic changes in Western societies, and familiar national security threats that have had a “21st century upgrade.”

Sedwill contended that the shift in global economic power will have a profound effect on the global order in the 21st century. “The future at the core of it is the relationship between Washington and Beijing,” he said, “ and that will determine essentially the course of the world economy, global security, and you could even argue, the future of the planet.”

“The biggest challenge,” he said, is to ensure that the benefits of economic and social change “extend to our entire societies.”

On national security challenges and threats, Sedwill noted an increased radicalization of vulnerable people, fragile states spewing organized crime and corruption into Western societies and financial markets, and the activities of malign states.

He cited Ukraine as an example of a nation that has “faced the full suite of that hybrid conflict from armed militias, weapons supplies, direct intervention, disinformation, cyberattacks, corruption, and so on.”

“That is the nature of modern conflict,” he said, adding, “and what we’re going to have to do is develop our deterrence doctrines and our military and security doctrines in order to be able to deal with that threat.”

Image: Making the point that after Brexit the United Kingdom will retain a leadership role in Europe, Mark Sedwill, national security adviser to British Prime Minister Theresa May, said: “We remain completely committed to the security of the Continent. We will work in the closest possible alliance with our partners in the EU and our allies in NATO, and we will find new ways of doing so.”