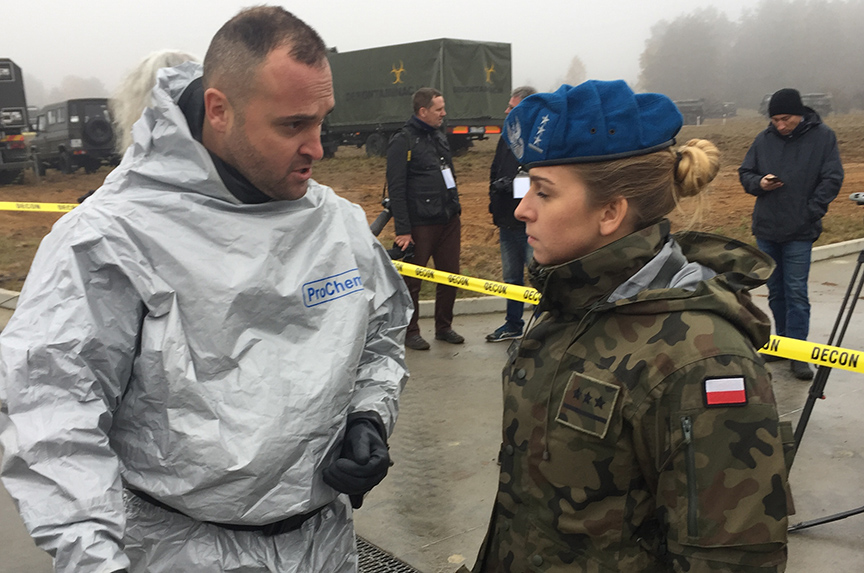 When Polish troops flew back from peacekeeping duties in the Central African Republic in 2015, Warrant Officer Mariusz Maronski was waiting for them at the airport.

He wasn’t part of a jubilant “Welcome home!” crowd. He was there for a far more serious reason.

The Poles, part of a European Union contingent to the civil war-torn country, had been in an area that had had outbreaks of Ebola, one of the world’s deadliest viruses.

As head of the Polish Armed Forces’ biological, chemical and nuclear decontamination team, Maronski’s job was to check the returning troops for Ebola and—if any showed signs of it—decontaminate them before getting them to doctors.

A lot was at stake. Not only could an Ebola carrier have spread the disease to other Polish troops, but to the public as well. News reports of Americans who had unknowingly contracted Ebola in 2014, then returned home to infect others, had generated world headlines.

Fortunately, the biological detectors that Maronski’s team carries showed that no returnee had Ebola.

The virus is one of dozens of biological and chemical agents that the team—part of the Polish military’s Epidemiological Response Center—is trained to detect and decontaminate. The Warsaw-based operation is so good at what it does that NATO has dubbed it one of the Alliance’s special-expertise units.

The skills of Maronski’s thirteen-person team were on display at NATO’s Anakonda 2018 exercise at the Drwasko Pomorskie Training Area in northwestern Poland in November.

The scenario was that an enemy had used a helicopter to spray a toxic pesticide on NATO troops. Journalists covering the exercise saw soldiers lying in the field pretending to be incapacitated.

The troops were rushed to a threat-detection and decontamination tent complex that Maronski’s team had set up in the event of a biological, chemical or nuclear attack. Wearing protective suits that conjured up images of astronauts, the team used handheld AP2C detectors to identify the agent that was supposed to have felled the soldiers, then decontaminated them for it. AP2Cs detect an array of both biological and chemical threats.

After determining what chemical struck the troops, the team used a dosimeter to check them for radiation.

In a situation where every minute can mean the difference between life and death, the team has compressed the decontamination process to fifteen minutes.

It starts with removing the soldier’s clothing and placing it in a hazardous-materials disposal bag. A conveyor belt then carries the soldier to a bath tent. After washing the victim with a special detergent, the team checks to see if the contamination is gone. Then it transfers the soldier to a hospital-tent complex for treatment.

After all the injured troops have been taken to the field hospital, Maronski’s team practices decontaminating their equipment and tent complex before packing up for the next mission.

One of the job’s challenges is working in the suits for extended periods. “It’s not so bad when the weather is OK,” Maronski said, “but when it’s really hot, we are able to stay in them for only about forty minutes” before becoming over-heated and exhausted.

Maronski started his army career in logistics in 2003, ensuring that soldiers in the field got the portable baths they needed to keep clean. Then he was in a command platoon, whose job was to ensure that battalion commanders’ field headquarters had communications equipment, other items, and supplies they needed.

He was deployed on a NATO peacekeeping mission to Kosovo in 2008, while still in logistics.

“I had been interested in chemical and biological weapons for some time, particularly the bioterrorism threat in the Middle East,” said Maronski, a native of the spa resort town of Busko Zdroj in southeastern Poland.

Western intelligence agencies and various experts have warned that the chance of terrorists obtaining, and using, biological weapons is growing. The threats they have mentioned include Ebola, tularemia and anthrax.

A major part of Maronski’s team’s mission is training, partly because the threat is ever-evolving. “Everyone on my team has taken first-aid training, the Combat Lifesaver Course, and specialty courses dealing with particular kinds of biological, chemical and nuclear-radiation threats,” he said.

Maronski appreciates the importance of working with allies.

“The Polish Armed Forces does a lot of training with other NATO countries’ soldiers,” he said. “The main advantage is learning from each other by exchanging experiences and procedures.”

One of the NATO exercises the team has participated in is Toxic Trip, which focuses specifically on responses to weapons of mass destruction. The unit also takes part in the chemical-, biological- and radiation-threat components of all-encompassing NATO exercises, including Anakonda and Dragon.

In addition, the team has trained jointly with the Illinois National Guard, which has developed  expertise in responding to biological, chemical and radiation threats, and with civilians who respond to disasters, such as firefighters.

The continuous training can be hard on family life, Maronski said. Long days at his post in Warsaw and a lot of temporary assignments in the field and other locations can cut down on the time he’s able to spend at home.

But the idea that his team could save a lot of lives in a conflict makes it worthwhile.