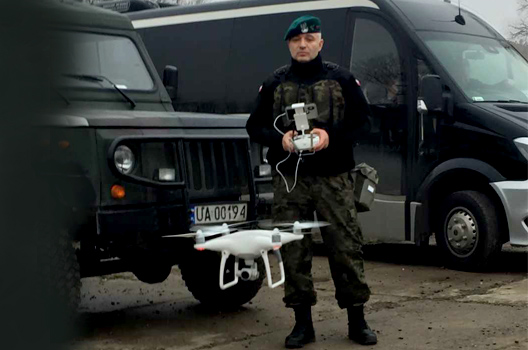 Two years ago, Maj. Marcel Podhorodecki bought himself a new toy—a battery-powered drone he could control with an application downloaded to his cellphone.

The public affairs officer for Poland’s 12th Mechanized Division, an army unit that plays a key role in the defense of NATO’s eastern border, took a four-day course in the drone’s fundamentals. Determined to become a whiz at it, he began learning the DJI Phantom 4’s fine points by trial and error. Hundreds of practice hours later, the seventeen-year officer from Jelenia Gora in southwestern Poland achieved the mastery he had hoped for. In fact, he became so skilled that he began using the drone in his work at the 12th Mechanized’s home in Szczecin.

Podhorodecki paid about $1,800 for his DJI Phantom 4, which can stay airborne about twenty-five minutes. His white drone has four propellers on top and a camera at the bottom. The drone can fly from place to place or hover in one location, and has a sensing system that prevents it from crashing into a hillside, a building or another object.

Not only does the video that the drone shoots help promote Podhorodecki’s unit—and thus the Polish military as a whole—but it’s also become a training tool for the 12th Mechanized. Its commanders check the sweeping aerial views the drone takes in its twenty-five minutes aloft so they can do a better job of assessing how their troops performed in maneuvers.

“The drone is my hobby. I love it,” but it’s also a mission enhancer, Podhorodecki said at a river-crossing during NATO’s Anakonda 2018 exercise in November. The sparkle in his eyes and schoolboy grin left no doubt about his enthusiasm for his tiny promotion-mission force multiplier.

Before he became a public affairs officer eight years ago, Podhorodecki was into bigger toys. He directed anti-aircraft battery operations at the platoon and then the brigade level.

The 12th Mechanized’s river-crossing mission involved Czech as well as Polish troops. Podhorodecki also worked with US and Afghan forces on real-world missions in Afghanistan. These joint activities have led to him forging “strong friendships with many brothers in arms,” he said.

Since civilian drones pose a danger to people, animals, property, and aircraft, Poland, like many countries, requires that their operators pass a test and be licensed. Users must also take an eye exam every two years, Podhorodecki said. If you want to fly a drone in Poland, you must check to see if the area where you want to operate is open or closed to drone traffic and when you fly one near an airport, you have to notify the control tower you are out there.

At Anakonda, Podhorodecki set his drone down on a concrete tarmac along the Vistula River near Chelmno, warmed it up and sent it soaring above 12th Mechanized troops conducting a practice river mission. The task that Anakonda planners originally assigned to the 12th Mechanized was a river crossing and landing. Specifically, it was sending a metal ferry containing armored personnel carriers from one side of the Vistula to another, where the vehicles would then roll up the bank to engage an imaginary enemy.

The river wasn’t cooperating, however. It dropped so low overnight that, in its middle, gulls stood on sandbars poking above the current. This created the danger of the ferry running aground if it tried to cross the Vistula.

Instead of crossing the Vistula, the 12th Mechanized ferry maneuvered only along the staging-area side, where the water was deep enough to prevent it from running aground. Its pilot turned it around in the current so it could disgorge an armored personnel carrier onto the staging area, as if it had crossed the river.

About 12,500 troops were in Poland and 5,000 in the Baltics for Anakonda, one of 106 NATO exercises this year. In addition to Poland, Anakonda included forces from Britain, Canada, Germany, Latvia, Lithuania, Estonia, the Czech Republic, Hungary, Slovakia, Romania, and Turkey. Anakonda wrapped up on December 6.

“The drone is my hobby. I love it,” but it’s also a mission enhancer, said Polish Maj. Marcel Podhorodecki. (Hal Foster)

Podhorodecki’s drone filmed several iterations of the 12th Mechanized’s river landing maneuver, which ended with troops scurrying from the ferry to anchor it with cables on shore and the armored personnel carrier roaring off the ferry. Meanwhile, a Polish civilian television crew reporting on Anakonda sent up a black drone to cover the action. The juxtaposition of the white and black drones evoked “Star Wars” for some observers.

Podhorodecki posts his drone footage to YouTube and to the Facebook page that his three-person public affairs team set up to promote the 12th Mechanized. You can see it on YouTube and on Facebook.

Aerial footage of maneuvers like the ones the 12th Mechanized performed at Anakonda are a hit with website visitors, Podhorodecki said. “We get a lot of likes and comments on our Facebook page” when we use drone footage, he said. “And we respond to them. They are a great way to generate interactivity” between the military and civilians, he said.

Internet users’ fascination with the footage helps build public support for the Polish military’s and NATO’s mission. It also makes the video a good recruiting tool for young Poles thinking about a military career, Podhorodecki said.

But using a drone is not only about helping accomplish the mission, he said — it’s just plain fun.