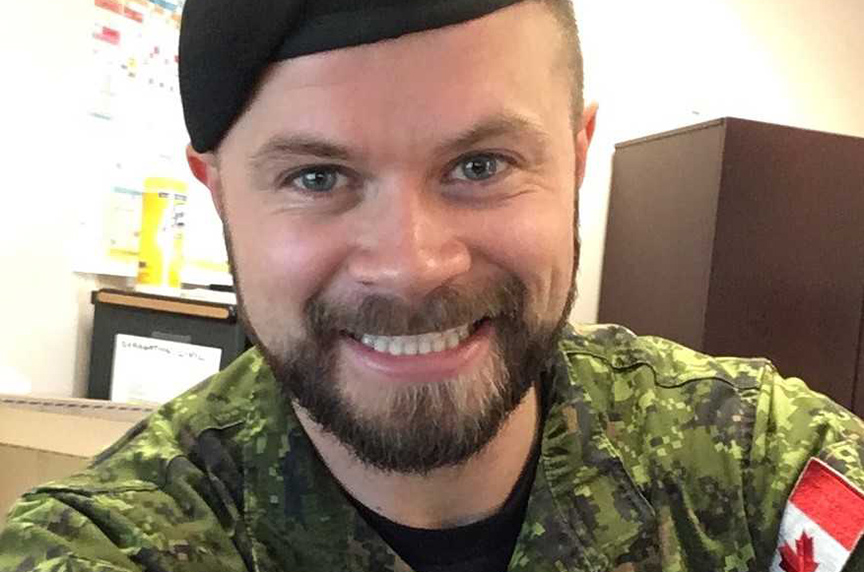 When a reserved seventeen-year-old left his small rural hometown for basic training, he carried more than just his suitcases with him. Naval Lt. Jeremy Arsenault arrived at Saint-Jean-sur-Richelieu, Quebec, for basic training in the Canadian Armed Forces (CAF) as one of his town’s only residents to attend university and holding the heavy weight of a secret.

“When I joined the CAF in 2006, I was still a closeted country boy,” he revealed. “I was very scared that someone was going to find out my secret and that it would negatively affect my career moving forward. I did everything I could to hide the fact that I was gay.”

Despite these trepidations, Arsenault forged ahead. When he arrived at the Royal Military College of Canada in Kingston, Ontario, a degree-granting university training military officers, he certainly wasn’t expecting to come out of the closet. Rather than rejection or ostracization, however, Arsenault was met with acceptance and encouragement by his military colleagues and friends.

With the stress of this announcement behind him, it was smooth sailing toward graduating with a Bachelor of Arts degree in business administration. Arsenault began training as a Naval Warfare Officer with the Royal Canadian Navy. This demanding training challenged Arsenault, but early setbacks spurred him to push himself even harder until he found himself back on track and excelling.

Excitement on (and in) the high seas

Perseverance is an attribute that has carried Arsenault across every obstacle that comes before him. He was never content with taking the easy road, and this tenacity got him out of Turtle Creek, New Brunswick, and into an exciting career in uniform. He credits his great grandfather as a contributing factor in setting out on this path.  Most of the men where he is from end up working in the woods or driving tractor-trailers. Arsenault, however, followed in the footsteps of his great-grandfather who joined the CAF in 1941. “Those Remembrance Days we spent side-by-side in uniform are some of my fondest memories,” Arsenault said.

After training, Arsenault was posted to HMCS HALIFAX on Canada’s east coast. “I was driving a billion-dollar warship, managing multiple departments at once, navigating the eastern seaboard and participating in multinational exercises,” he said. He went on to specialize in underwater warfare, requiring finely-tuned oceanography skills to positively identify underwater contacts and torpedoes from sea creatures.

“While all other specializations felt like a game of checkers to me, underwater warfare was a serious game of chess,” Arsenault said.

Interoperability between the CAF and fellow NATO allies during exercises is an essential element of training for Forces members. Arsenault appreciates the importance of working with allies. He has sailed with counterparts from the United States, France, and the United Kingdom and participated in missions from Canada’s arctic to the warm waters of Panama. He says that learning best practices from each other and comparing the different approaches to executing missions is the most interesting aspect of joint exercises.

Canadian warships, Arsenault said, have “a very good reputation” when it comes to skilled sailors.

“We may not have a lot of money for new ships, but the level of professionalism and skill has always impressed the American, French, and UK Navies that I have sailed with,” he said.

Working toward a more inclusive Canada

In 2016, Arsenault decided to take on a new challenge and asked to be posted back to Saint-Jean-sur-Richelieu so he could work at the Canadian Forces Leadership and Recruit School (CFLRS). The move inspired him to become more involved in LGBTQ2 issues and philanthropic ventures, both in and outside of work. He is the LGBTQ2 representative at CFLRS and works as a sponsor for any recruit or staff member who asks for help. He and his fiancé are governors for an LGBTQ2 organization in Montreal, Quebec, called Fondation d’emergence that helps in the fight against homophobia and transphobia.

Arsenault also helped staff the paperwork required for CFLRS to raise the Pride flag for the first time in 2018. He acknowledges that the CAF still has a lot of work to do in order to properly integrate transgendered members and create a fully open and accepting organization, but says that it has come a long way. With high-ranking members of the military and federal government taking steps toward inclusivity such as walking in Pride parades across Canada, a clear message is being sent at home and abroad.

“This top-down type of support really shows Canada that we are moving in the right direction in terms of LGBTQ2 rights,” he explained. “It shows less-fortunate countries how progressive and inclusive we can be.”

Ashley Materi is a public affairs officer for the Canadian Department of National Defence and is currently an intern with the Public Diplomacy Division at NATO. Follow her on Twitter @Ash_Materi.

Image: At the Royal Military College of Canada in Kingston, Ontario, Naval Lt. Jeremy Arsenault, who is gay, was met with acceptance and encouragement by his military colleagues and friends. “This top-down type of support really shows Canada that we are moving in the right direction in terms of LGBTQ2 rights,” he said. “It shows less-fortunate countries how progressive and inclusive we can be.” (Photo courtesy of Lt. Jeremy Arsenault)