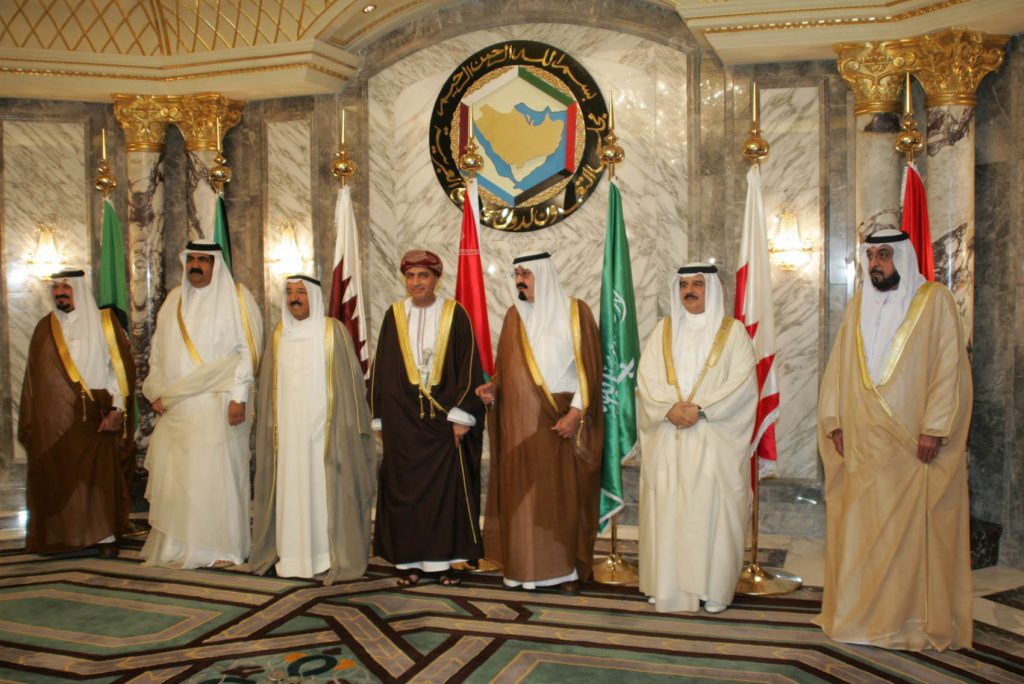 Reports that the Gulf Cooperation Council (GCC) is considering some form of membership for two non-Gulf states – Jordan and Morocco – confirm that the conservative Sunni monarchies of the Middle East are closing ranks against Iran, Shiite-led Iraq and the democratic wave sweeping the region.

GCC secretary general Abdullatif al-Zayani made the announcement Tuesday after a summit of the six-member group affirmed support for Saudi and United Arab Emirates military intervention against predominantly Shiite pro-democracy protesters in Bahrain.

Zayani did not make clear whether Morocco and Jordan would be offered a second-tier membership in the GCC, which groups Saudi Arabia, Kuwait, Oman, the UAE, Qatar and Bahrain.

Founded in 1981 in the aftermath of Iran’s 1979 revolution and in the midst of the 1980-88 Iran-Iraq war, the GCC encourages economic and especially military cooperation among its members, which all border the Persian Gulf. In territorial terms, it would make more sense to offer membership to Iraq or Yemen than to Jordan or faraway Morocco.

However, the wave of popular unrest that has swept the region since January – and toppled once durable pro-Western authoritarian non- monarchies in Tunisia and Egypt – has spread anxiety among conservative Sunni monarchies already unsettled by the Shiite replacement of a Sunni regime in Iraq and by Iran’s slow but steady nuclear advancement.

Jon Alterman, director of the Middle East program at the Center for Strategic and International Studies in Washington, said it was clear that GCC members regard "the success of monarchies in the Middle East as important for regional security and their own security. They want Jordan and Morocco to stay as moderate pro- Western states."

Alterman added that GCC members regard "the experiment of republican military rule [in the region] as a failure. After 50-60 years, it’s run its course and the model of choice is enlightened monarchies."

He predicted that the GCC would seek to funnel more investment into Jordan and Morocco to ensure that they survive any popular protests.

Iraq would seem a far more logical member of the alliance given its location and status as a major oil producer.

Marc Lynch, a Middle East expert at George Washington University who blogs at foreignpolicy.com, wrote Wednesday on his blog that "GCC membership, by this argument, might embed Iraq in an institutional structure which firmly rooted it in a pro-U.S. and anti-Iranian camp, while dramatically increasing the size and power of the GCC alliance. But its exclusion from this round isn’t that surprising.

"The Gulf states, particularly Saudi Arabia, remain deeply hostile towards and suspicious of the Shi’a dominated Iraqi government in general and Prime Minister Nouri al-Maliki specifically. They have never been comfortable with its new democratic forms. "

In a subsequent interview, Lynch told IPS that the move appeared aimed at keeping "the kings on the reservation… This is the Gulf monarchies reaching out to other monarchies to keep them from falling or reforming."

Lynch said he had heard reports that GCC members might also bolster Jordan and Morocco by allowing in more labourers from those two states.

There have been other de-facto additions to the alliance in the past. Former Secretary of State Condoleezza Rice worked assiduously to build what she called the GCC plus Two – GCC members plus Jordan and Egypt – to contain an ascendant Iran and to blunt Iranian efforts to gain nuclear weapons capacity.

However, Egypt is no longer led by the predictably pro-Western Hosni Mubarak and has already made moves suggesting it will restore diplomatic relations with Iran.

The Sunni monarchies "are clearly worried about Egypt, which is the center of gravity in the Arab world," Alterman said.

Saudi Arabia was particularly incensed by the fall of Mubarak and has made clear that it will not permit regime change in Bahrain, which is connected to Saudi Arabia’s predominantly Shiite Eastern Province by a 16-mile causeway. Saudi Arabia and the UAE sent 1,500 troops into Bahrain on Mar. 14 to shore up the island state’s Sunni monarchy after weeks of popular protests.

Following Tuesday’s GCC summit, Zayani issued a statement praising "the prudence of the leadership of the Kingdom of Bahrain and faithfulness of its people, confirming that the security of the GCC member countries is an integral issue and that the preservation of stability and security is a collective responsibility."

Bahrain has promised to lift a state of emergency in the country Jun. 1. But hundreds of people have been killed or arrested and more than 1,000 dismissed from their jobs in recent weeks in an effort to tamp down dissent.

GCC officials have portrayed the protests as instigated by Iran and Shiite religious extremists. The GCC statement Tuesday said regional leaders "expressed profound concern over the continual Iranian interference in domestic affairs of the GCC member countries through committing conspiracy against their national security, spreading sedition and sectarian affliction among their peoples and flagrantly violating their sovereignty and independence, the principles of good neighborhood, international norms and laws, the United Nations Charter and the Organization of Islamic Conference statute."

However, Les Campbell, Middle East director for the National Democratic Institute, a U.S. government-backed organisation that teaches democratic practices abroad, said the real issue in Bahrain was lack of equitable popular representation in the parliament and cabinet.

"It’s very wrong to portray what is going on in Bahrain as sectarian," Campbell told an audience at the U.S. Institute of Peace in Washington last month. "There is a system in Bahrain that is not representative… In fact in Bahrain, there are many moderate societies and leaders."