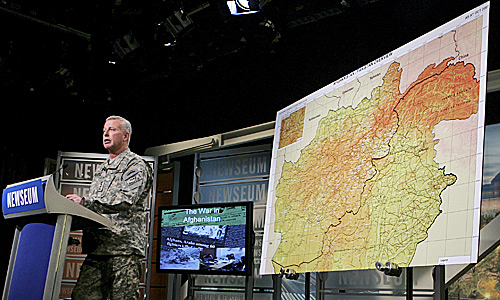 One of the interesting points of contention in last night’s vice presidential debate between Delaware Senator Joe Biden and Alaska Governor Sarah Palin was on the topic of whether an Iraq-style surge would work in Afghanistan.    Earlier in the day, Army General David McKiernan (or, as he’s sometimes known in Alaska, "McClellan"), commander of NATO’s International Security and Assistance Force (ISAF) had both called for an infusion of additional troops and equipment "as quickly as possible" and said that "no Iraq-style ‘surge’ of forces will end the conflict."

Palin saw this as a call for a surge-esque activity:

The surge principles, not the exact strategy, but the surge principles that have worked in Iraq need to be implemented in Afghanistan, also. And that, perhaps, would be a difference with the Bush administration.

Well, first, McClellan did not say definitively the surge principles would not work in Afghanistan. Certainly, accounting for different conditions in that different country and conditions are certainly different. We have NATO allies helping us for one and even the geographic differences are huge but the counterinsurgency principles could work in Afghanistan. McClellan didn’t say anything opposite of that. The counterinsurgency strategy going into Afghanistan, clearing, holding, rebuilding, the civil society and the infrastructure can work in Afghanistan. And those leaders who are over there, who have also been advising George Bush on this have not said anything different but that.

Well, our commanding general did say that. The fact of the matter is that again, I’ll just put in perspective, while Barack and I and Chuck Hagel and Dick Lugar have been calling for more money to help in Afghanistan, more troops in Afghanistan, John McCain was saying two years ago quote, "The reason we don’t read about Afghanistan anymore in the paper, it’s succeeded.

So, who’s right?   Well, to paraphrase former President Bill Clinton, it depends on what the meaning of surge is.   If it’s simply an infusion of a large number of additional troops — which, as NPR’s Tom Gjelten points out, is the popular understanding of the term — then Palin’s right — it is what  McKiernan/McClellan called for.  If, however, it’s a specific military strategy based on counterinsurgency tactics, then McKiernan explicitly rejected it.

As Ann Scott Tyson reported in yesterday’s WaPo, McKiernan said "Afghanistan is not Iraq" but "a far more complex environment than I ever found in Iraq."  Additionally, he very much wants to avoid a particular tactic that was crucial to — although many would say incidental to or even separate from — the surge in Iraq:

"I don’t want the military to be engaging the tribes," he said. Given Afghanistan’s complicated system of rival tribes and ethnic groups and the recent history of civil war, allying with the wrong tribe risks rekindling internecine conflict, he said. "It wouldn’t take much to go back to a civil war."

Julian Barnes, writing for LAT, adds that McKiernan is desperate more more troops and materiel.  He’s called for an additional three combat brigades and additional helicopters but isn’t likely to get more than one brigade any time soon.  "We are in a tough counterinsurgency fight, we are in a higher level of violence this year than we were this time last year," McKiernan declared.    Additionally, he has endorsed a plan by Afghanistan’s defense minister to create a joint border patrol force to stem the flow of foreign fighters along the border with Pakistan.

McKiernan is probably wrong about engaging the tribes — and Biden ought to be very skeptical of the general’s analysis. After all, one key reason the insurgency was tamed in Iraq was that the U.S. military essentially began paying tribal insurgents not to attack them. Just yesterday, the British ambassador to Kabul was caught warning that President Hamid Karzai’s government is on the verge of collapse. Afghanistan has never had a strong central government. And as former Defense Intelligence Agency analyst and tribal expert Pat Lang points out, Afghan tribes are a fact of life with which the United States must deal.

It’s noteworthy, too, that incoming CENTCOM boss David Petraus, who is credited with authoring the surge and leading its success, seemed to take a middle ground earlier in the week. Carlotta Gall for the NYT:

General Petraeus’s experience in Iraq has allowed him to develop a comprehensive approach to fighting the counterinsurgency. But the general was careful not to take any lessons from Iraq too hastily, and said he would not be directing things in Afghanistan and Pakistan with a “several-thousand-mile screwdriver” from Central Command.  “People often ask, ‘What did you learn from Iraq that might be transferable to Afghanistan?’ ” he said. “The first lesson, the first caution really, is that every situation like this is truly and absolutely unique, and has its own context and specifics and its own texture,” he said.

“One of the areas that of course proved very important in Iraq and may, and I underline may, have some relevance in Afghanistan, is the concept of reconciliation,” he added. “That you cannot kill or capture your way out of an insurgency that is as significant in size as was the one in Iraq, nor, I believe, as large as the one that has developed in Afghanistan.”

Is this what Palin meant by "surge principles, not the exact strategy, but the surge principles that have worked in Iraq"?  Who knows.  But, as with the dispute in last week’s debate between Senators John McCain and Barack Obama as to whether Dr. Henry Kissinger supports sitting down and talking with one’s enemies "unconditionally," it’s both a matter of interpretation and making a mountain out of a molehill.