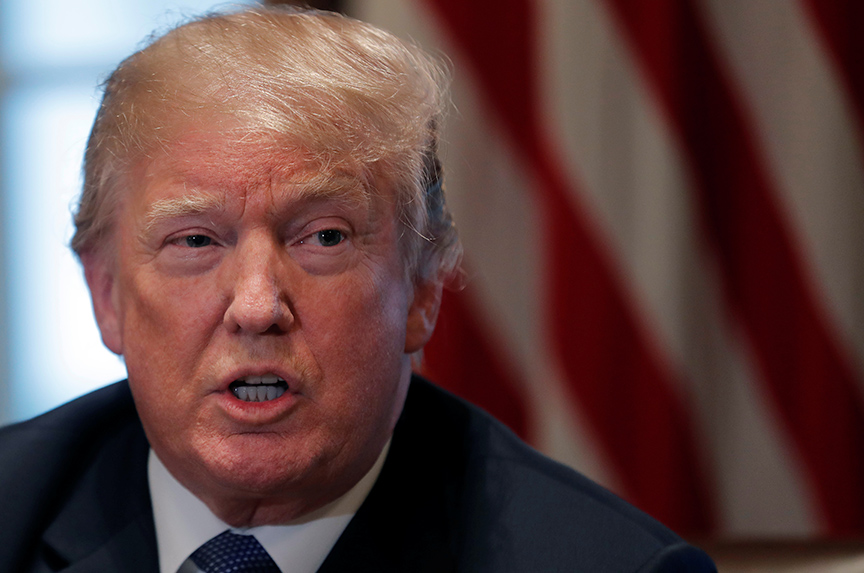 US President Donald J. Trump is weighing his options as he decides how to respond to an alleged chemical weapons attack in Syria. He has not ruled out military strikes.

In a tweet on April 11, Trump warned Russia that missiles targeting its ally, Syria, “will be coming, nice and new and ‘smart!'”

The tweet follows news that Russia has the ability to jam US drones flying over Syria and Moscow’s veto of a United Nations Security Council resolution to create an expert body to determine responsibility for an alleged April 7 chemical weapons attack near Damascus.

In his tweet, which was directed at Russia, Trump wrote: “You shouldn’t be partners with a Gas KIlling Animal who kills his own people and enjoys it!” He was referring to Syrian President Bashar al-Assad who has presided over a civil war in his country for the past seven years.

White House spokesperson Sarah Huckabee Sanders said on April 10 that Trump will skip the Summit of the Americas in Peru later this week in order to “oversee the American response to Syria and to monitor developments around the world.”

Here’s a look at developments since April 7, the day dozens of people were killed in the rebel-held Damascus suburb of Douma.

—    Dozens of people, including children, are killed in an attack in Douma. The use of chemical weapons is suspected.

—    Trump warns in a tweet that Syrian President Bashar al-Assad will pay a “big price” for the attack.

—    Trump says he will have a decision on how to respond to the alleged chemical weapons attack in Douma within “24 to 48 hours.” The president, referring to his options, says “nothing is off the table.”

—    US Defense Secretary Jim Mattis does not rule out missile strikes on Syria.

—    The US ambassador to the United Nations, Nikki Haley, tells an emergency meeting of the Security Council that Russia’s hands “are all covered in the blood of Syrian children.”

“We must not overlook Russia and Iran’s roles in enabling the Assad regime’s murderous destruction,” Haley said. “Russia could stop this senseless slaughter if it wanted, but it stands with the Assad regime and supports without any hesitation.”

—    “There was no chemical weapons attack,” Russia’s ambassador to the United Nations, Vasily Nebenzya, tells the Security Council. He says Moscow has warned the United States that military action against the Assad regime will have “grave repercussions.”

—    US officials tell NBC News that Russia has figured out how to jam some US military drones flying over Syria.

—    Trump cancels a planned visit to Latin America to focus on his administration’s response to Syria.

—    At the UN Security Council, Russia vetoes a US resolution to create an expert body to determine responsibility for the attack in Douma.

— Trump taunts Russia in a tweet warning missiles fired at Syria “will be coming, nice and new and ‘smart!'”

— Russian Foreign Ministry spokeswoman Maria Zakharova says in a Facebook post that “smart missiles should fly toward terrorists, not the legal government that has been fighting international terrorism for several years on its territory.”

Reaction from around the world

— A European Union spokesperson says: “The evidence points towards yet another chemical attack by the regime.”

— Ibrahim Kalin, a spokesperson for Turkish President Recep Tayyip Erdogan, says: “The entire international community, primarily countries that have an influence on the Syrian regime, has a responsibility to take the necessary steps in order to prevent similar war crimes and crimes against humanity.”

—    Russian Foreign Minister Sergei Lavrov says there is no evidence of a chemical weapons attack.

“They agreed that reports of a chemical weapons attack in Syria were utterly reprehensible and if confirmed, represented further evidence of the Assad regime’s appalling cruelty against its own people and total disregard for its legal obligations not to use these weapons,” a Downing Street spokesperson says in a read out of the calls.

—    British Prime Minister Theresa May says if it is proven that the Assad regime was responsible for a chemical weapons attack in Douma “the regime and its backers, including Russia, must be held to account.”

—  German Chancellor Angela Merkel says that “the evidence that chemical weapons were used there is very, very clear.”

—  Saudi Crown Prince Mohammed Bin Salman says the kingdom could take part in military action in Syria. “If our alliance with our partners requires it, we will be present,” he said.

Reactions on the Hill

Unsurprisingly, US lawmakers are split on how to respond to the incident in Douma.

Here’s a look at what some lawmakers have said:

US Sen. John McCain (R-AZ), chairman of the Senate Armed Services Committee: “President Trump last week signaled to the world that the United States would prematurely withdraw from Syria. Bashar Assad and his Russian and Iranian backers have heard him, and emboldened by American inaction, Assad has reportedly launched another chemical attack against innocent men, women and children, this time in Douma,” McCain said in a statement.

In a separate tweet, McCain notes that Trump ordered missile strikes on Syria following a chemical weapons attack a year ago. “He should do so again & make Assad pay a price for his brutality,” the senator wrote.

Sen. Bob Menendez (D-NJ), ranking member on the Senate Foreign Relations Committee: “This latest catastrophe is proof that a limited use of military force in Syria without a broad and fully-resourced diplomatic strategy, as President Trump chose to do in April of 2017, was ineffective. To make matters worse, the president’s recent plans to freeze U.S. assistance to the Syrian people, and the administration’s failure to put forth a comprehensive plan, other than calling for an ‘immediate response’, are the latest missteps in their calamitous retreat from American leadership around the world,” Menendez said in a statement.

Sen. Bob Corker (R-TN), chairman of the Senate Armed Services Committee: “I think we need to take some surgical military strikes against Syria… Something for a heavy price to be paid,” Corker said according to CNN.

Rep. Mac Thornberry (R-TX), chairman of the House Armed Services Committee: Thornberry tells Fox News that the United States should “absolutely” consider airstrikes against Syria. “We should do so with those allies to make it an international condemnation of chemical weapons,” Thornberry said. “It is really important for our allies like Britain and France to stand with us.”

Sen. Ben Cardin (D-MD), a member of the Senate Foreign Relations Committee: “Clearly, the circumstances in Syria require US leadership in response… I certainly hope that the president is in consultation with our allies and that he recognizes that the response needs to be judged and measured so that we don’t get engaged with US troops into a civil war in Syria,” Cardin said.

Sen. Chris Murphy (D-CT), a member of the Senate Foreign Relations Committee: “Let’s be clear, these pinprick strikes have not worked… The president tried that a year ago and it seemed to make the situation worse, not better,” he said according to CNN.

Sen. Jeanne Shaheen (D-NH), a member of the Senate Foreign Relations and Armed Services Committees: “I voted for military action when Assad launched illegal chemical weapons attacks in 2013, and I supported the Trump administration’s decision to launch airstrikes in response to Assad’s assault on civilians in 2017. However, military efforts alone are not sufficient to adequately deal with the Syrian civil war,” said Shaheen.

“As long as the conflict persists, terrorist organizations will continue to enjoy a safe haven in Syria and innocent people will continue to die. I have been calling on the White House to pursue a serious strategy for Syria since 2016. As a member of the Senate Armed Services and Foreign Relations Committees, I’ll continue to push for a clear strategy on Syria and will keep urging this administration to take additional actions against Russia and bad actors propping up Assad’s regime,” she added.

Image: US President Donald J. Trump will skip the Summit of the Americas in Peru later this week in order to focus on his administration’s response to an alleged chemical weapons attack in Syria. (Reuters/Carlos Barria)