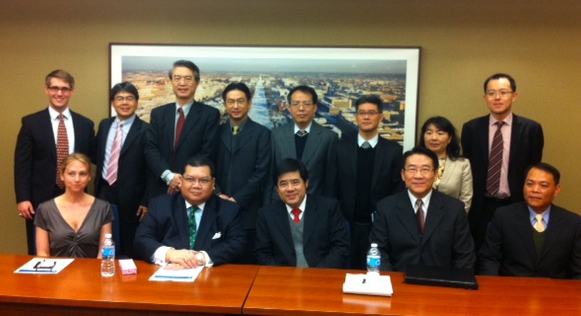 Taiwan’s recent municipal elections show a growing de facto consensus among Taiwan’s major parties that officially declaring independence is not an option and that closer economic and cultural ties with the Mainland are a must.

According to a panel of experts speaking December 1 at the Atlantic Council, future Taiwan governments, whether led by Taiwan’s current ruling party, the Kuomintang (KMT), or by the primary opposition party, the Democratic Progressive Party (DPP), are likely to continue support for expanding economic ties with the Mainland and maintaining stable cross-Strait political and security relations, which rules out seeking de jure Taiwan independence. At the same time, they noted, a successor government has many options regarding the terms and conditions for development of Taiwan’s relations with the Mainland.

Uncertainty about whether KMT will retain power after the 2012 Presidential election or the DPP will regain control it lost in 2008 has increased following the outcome of the recent municipal elections. Which party really “won” the election in the eyes of the public is not clear. Officially, the KMT was the winner, taking three of the five mayoral seats up for election with the DPP winning the other two. However, the DPP won 49.9 percent of the popular vote, compared to the KMT’s 44.5 percent.  Recent polls show further ambiguity: 46 percent of respondents felt the DPP won the election, while 35 percent believed the KMT won. Some media have described it as a “catastrophic, hollow” KMT victory. Overall, “there was no major change in the blue-green [KMT-DPP] landscape, except the DPP broadened its stronghold in the south and narrowed its gap with the KMT in central-northern Taiwan, and increased its number of councilmen,” said Liu Shih-chung, Senior Research Fellow at the think tank, Taiwan Brain Trust.

KMT candidates ran on the party’s cross-Strait relations credentials by highlighting two years’ worth of critical negotiations on economic and cultural affairs with the Mainland. In his first year as President, Ma re-established cross-Strait transit and communications links, as well as agreements on tourism, inter-cultural, and academic exchanges. Their most notable accomplishment was the 2010 signing of a comprehensive free-trade agreement (FTA), the Economic Cooperation Framework Agreement (ECFA). Over the next decade, implementation of ECFA will create several cooperative mechanisms intended to increase formal inter-governmental dialogue on economic affairs.

Breaking with the past, the DPP moderated its stance on cross-Strait relations, an issue that proved costly in the 2008 election. Traditionally, the DPP has pursued goals of securing domestic and international support for Taiwan’s de jure independence from the Mainland. The party has often criticized Ma and the KMT for putting Taiwan sovereignty in jeopardy in cross-Strait negotiations. But in this election, DPP candidates made few statements about cross-Strait relations other than to assure voters that it would uphold all KMT-negotiated agreements provided it could modify certain of the agreements’ provisions. DPP candidates focused on improving domestic governance and environmental sustainability.

The election results potentially complicate cross-Strait negotiations and increase uncertainty about the 2012 national elections, however. Ma’s leadership within the KMT is unlikely to be challenged, but some interpret KMT losses as a no-confidence vote on President Ma by wing voters who played a critical role in his 2008 election. Ma’s response to domestic criticisms and concerns about the pace of cross-Strait relations and how Taiwan-Mainland agreements translate into tangible benefits for people in Taiwan are likely to be the primary deciding factors for voters in the 2012 election.

The DPP has strengthened its position heading into the 2012 election by moving to the political center. But so far the DPP has failed to formulate a credible alternative on cross-Strait relations. First of all, unlike the KMT, the DPP has yet to establish a direct dialogue with the Chinese Communist Party. Secondly, the DPP continues to reject the “1992 Consensus” supported by the KMT which served as the critical political step toward meeting the Mainland’s demand that China accept the “One China Principle.” If the DPP took power without supporting the  Consensus or offering an acceptable alternative, cross-Strait relations could be stalled or even pushed into a crisis. Thirdly, DPP may have to abandon efforts to renegotiate agreements with the Mainland if it is foreseeable that their demands would be non-starters and provoke new tensions.

Changing its positions on these issues will not be easy. The DPP’s shift to the center on cross-Strait relations has already alienated an important fundamentalist segment within the DPP that still seeks de jure independence. The "One Country on Each Side" Alliance, led by the son of former President and DPP chairman Chen Shui-bian, won 36 city council seats. “This still shows uncertainty as to what kind of DPP will emerge in the future,” said Anne Hsiao, a Public Policy Scholar at the Woodrow Wilson Center. By extension, what kind of Taiwan policy toward the Mainland will emerge in the future is uncertain. As David Brown, Adjunct Professor at Johns Hopkins-SAIS, declared, “Nothing is off the table for Taiwan, except for de jure independence.”