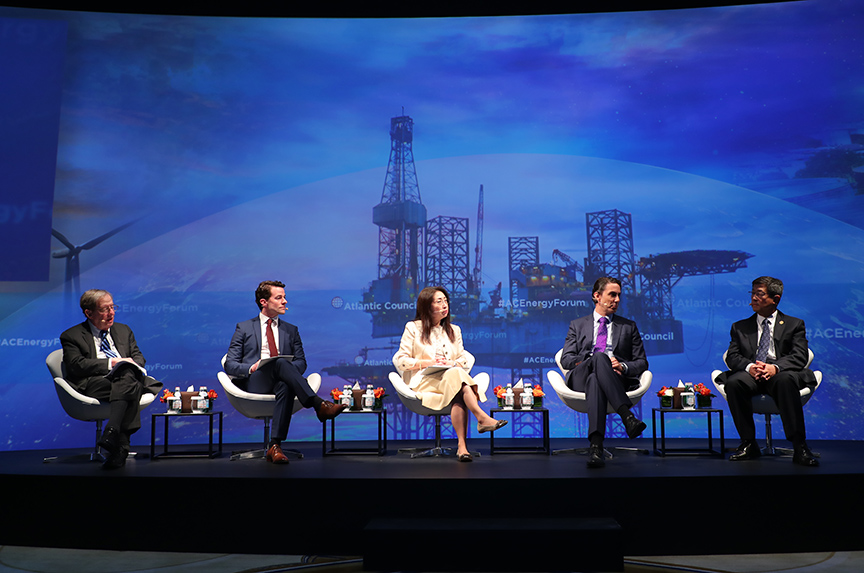 Climate change, geopolitics, economic development, energy transitions and security of supply are just some of the challenges facing energy security in the twenty-first century.

“It doesn’t take more than a glance at newspaper headlines to recognize that the current period is a time of great change and volatility,” said Richard L. Morningstar, founding chairman of the Atlantic Council’s Global Energy Center.

Morningstar moderated a panel discussion at the Atlantic Council’s 2019 Global Energy Forum in Abu Dhabi in which panelists discussed the evolution of the concept of energy security and the prevailing trends.

Pointing to the rapidly growing interconnectedness of energy and data networks, David Livingston, deputy director for climate and advanced energy at the Atlantic Council’s Global Energy Center, said he most worries about the risks this poses.

“More cars in the United States, and soon to be globally, are connected to mobile data networks than cellular phones… it just gives you something to think about,” said Livingston. “As we seek efficiencies, we also potentially create new risks and vulnerabilities.”

Yukari Yamashita, director of the Charge of Energy Data and Modeling Center at the Institute of Energy Economics, Japan, said she worries about the speed of technological advancements and the inability of governments and the business sector to keep up.

Sun Xiansheng, secretary general of the International Energy Forum, cited the US-China trade dispute that while currently on pause was marked much of last year by tit-for-tat tariffs.

While Amos Hochstein, senior vice president, marketing, at Tellurian Inc., said the rise in anti-semitism across Europe, xenophobia and white nationalism in the United States, and nationalist approaches around the world keep him up at night.

More than seventy years since the end of World War II “we’re back to where we were and we’re not paying enough attention to that,” said Hochstein, contending that the geopolitical developments will have a negative impact on energy, economies, and national security across the world.

Energy transitions around the world have been fueled in large part by concerns about the dire consequences of climate change. Countries are—to varying degrees—making a shift away from fossil fuels to renewable sources of energy while all the while attempting to cut carbon emissions.

Such a transition needs to be carefully considered, said Yamashita.

“We know we are going toward cleaner energy use and we have to walk away from dirty coal, oil or even natural gas, but we need to have a really good plan” to successfully make that transition, she said.

Hochstein, who served as special envoy and coordinator for international energy affairs and led the State Department’s Bureau of Energy Resources in the Obama administration, said absolute energy use transformations, as discussed by Yamashita, don’t happen overnight.

“I don’t think we are going to a 100 percent renewable world anytime soon,” he said.

A transition toward cleaner energy fuels will result not only in the greater use of renewables, but also in the growth of natural gas, said Hochstein. “What gas has been able to do is provide for cleaner air in large parts of the world,” he said, citing China’s embrace of natural gas as a way to tackle serious air pollution issues and Indian Prime Minister Narendra Modi’s focus on turning his country into a gas-based economy

On June 1, 2017, US President Donald J. Trump withdrew the United States from the Paris climate agreement. What are the geopolitical implications of this decision?

“The future of the Paris agreement, as just the agreement itself, the political entity that it is, matters a heck of a lot less than the future of that potluck of different climate commitments or individual country commitments that were originally brought to Paris. And, crucially, that those commitments… continue to be seen as in the self-interest of those countries,” said Livingston.

Hochstein said Trump’s Paris decision will have certain impacts, but it will not have a long-term geopolitical impact as long as technology continues to evolve and energy sources become cheaper.

“If we want to continue to get toward the goal of a clean energy future… we’re going to have to have the private sector continue to do what it does best, that is bring down costs, increase investments, and we have to make sure the government gets out of the way and provides the kind of incentives that allow the private sector to make this change,” said Hochstein.

“The government will not bring us to the promised land on this issue, it will be just if they can go back to their role as enablers of the positive forces in the economy,” said Hochstein.