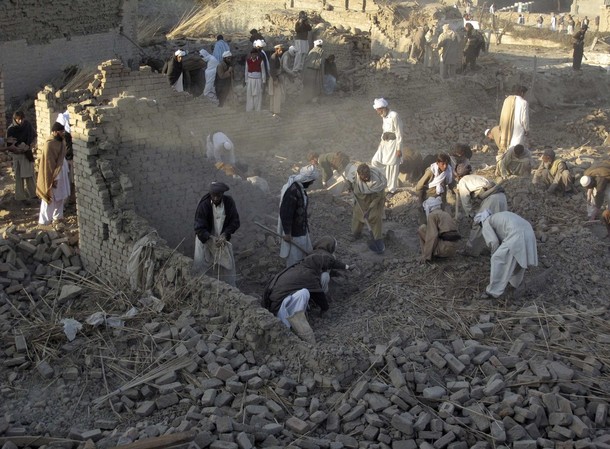 When U.S. President Barack Obama endorsed the Afghan war as his own the reason he gave was "because that’s where al Qaeda is."

In point of fact, al Qaeda skedaddled out of Afghanistan shortly after Oct. 7, 2001, when U.S. troops invaded. The bulk of the Afghan-based al Qaeda militants, led by Osama bin Laden and his family, pushed through the Tora Bora mountain range that straddles the Afghan-Pakistani border on their way to what they knew would be safe havens in Pakistan’s tribal belt.

On Dec. 6, 2001, Ajmal Khattak, the head of the Khattak tribe, who commanded some 600,000 pairs of eyes and ears in the area, advised this reporter and his Pakistani associates to be on horseback at the exit of the Tirah valley ASAP.

We flew over from Washington and got ourselves into position on Dec. 11 only to learn from local villagers that bin Laden and some 50 people had come out of the valley Dec. 9 and immediately got into waiting vehicles and drove off in direction of Peshawar. Despite Pakistani assurances that troops would be deployed at likely Tora Bora exit points, we didn’t see any.

Khattak, 83, was a close friend of my UPI associate for South Asia, Dr. Ammar Turabi. Khattak passed away earlier this month without ever meeting a U.S. intelligence officer. Yet he was a mine of information and contacts throughout the region who liked to make things happen.

A prolific poet in both Pashto and Urdu, former president of the Awami National Party, his poems and other writings celebrated the courage of revolutionaries. In his small native village, Akora Khattak, we frequently sipped tea with him in a dwelling that was more shack than house. He despised al Qaeda and was the first to tell us, before we journeyed to Kandahar in late May 2001, there were major differences between Taliban dictator Mullah Omar and Osama bin Laden. He also paved the way for our meeting with Omar June 4, 2001.

The second major erroneous assumption made by Obama is that if the Taliban get back to power in Afghanistan, "al Qaeda will be back in a heartbeat."

The Taliban’s Mullah Mohammad Omar and Osama bin Laden are not Tweedledee and Tweedledum, nor twins who evolved a bizarre master-slave relationship, nor Jekyll and Hyde, an altruistically well-meaning doctor who becomes a monster bent on lust and destruction.

The ideological and personality differences between bin Laden and Omar have long been misunderstood. Taliban is an indigenous Afghan movement made up of mostly ethnic Pashtuns, midwifed by Pakistan’s ISI intelligence agency to put an end to a civil war and fill a vacuum left by the Soviet retreat from Afghanistan. Mullah Omar consolidated his power with the title of Amir-ul-Mumineen (Supreme Commander of the Faithful) in the "Islamic Emirate" of Afghanistan, a medieval theocratic dictatorship and pitiless inquisition.

Bin Laden, expelled from Sudan in 1996 by combined U.S., European and Saudi pressure, opted to return to his old stomping grounds in Afghanistan while Omar was still consolidating his civil war victory.

Bin Laden’s ambitious global braggadocio was not what Omar the recluse had in mind. It was a shotgun wedding. Omar resented the worldwide publicity bin Laden was getting from foreign journalists in 1996 through 1999 and warned bin Laden to cut it out.

Omar and officials in his immediate entourage made clear to both Turabi and this reporter they were unhappy with bin Laden’s activities. Any fatwa issued by bin Laden declaring "jihad," or holy war, against the United States and ordering Muslims to kill Americans was "null and void," said Omar.

"He is not entitled to issue fatwas," he explained, "as he did not complete the mandatory 12 years of Koranic studies to qualify for the position of mufti."

The then 41-year-old (now 50) said the "Islamic Emirate had offered the United States and the United Nations to place international monitors to observe Osama bin Laden pending the resolution of the case, but so far we have received no reply."

Omar told UPI the Taliban regime would like to "resolve or dissolve" the bin Laden issue. In return he expected the United States to establish a dialogue to work out an acceptable solution that would lead to "an easing and then lifting of U.N. sanctions that are strangling and killing the people of the Emirate."

The one-eyed, 6-foot-6, five-times wounded veteran of the war against the Soviet occupation in the 1980s also said bin Laden was not allowed any further contact with the media or foreign government representatives. Bin Laden himself swore fealty to Omar in a statement published the previous April (2001).

The 1998 terrorist bombings of U.S. embassies in Tanzania and Kenya triggered U.S. retaliatory cruise missile strikes against al Qaeda’s Afghan training camps. Omar was rattled and feared his regime might be next. But bin Laden swore on the Koran, according to one of Omar’s ranking deputies, he had nothing to do with those bombings.

Then came the 2000 attack on the USS Cole in Aden and bin Laden pleaded he was not responsible for what others did in his name. Omar pointed out the Koran forbids the taking of the lives of innocent women, children and old people in strife, conflict and war and that "the perpetrators are criminals and should be so judged."

Omar reminded us bin Laden is "a hero of the war against the Soviet occupation of our country" and "he does not operate against anyone from the soil of Afghanistan. We requested that of him. We have his verbal and written pledge that he will abide by it in order that the relations between the Islamic Emirate and other nations are not affected." The attacks on the World Trade Center’s twin towers and the Pentagon took place three months later.

The late Ajmal Khattak told us about "deep fissures behind a patina of Islamic unity" between Taliban’s Mullah Omar and al Qaeda’s Osama Bin Laden. They’ve been there since bin Laden first arrived in 1996 but were never exploited. Omar was prepared to turn bin Laden over to a Shariah court in a neutral Muslim country. But the incoming Bush 43 team had other priorities.

Arnaud de Borchgrave, a member of the Atlantic Council, is editor-at-large at UPI and the Washington Times.  This column was syndicated by UPI as "Taliban vs. al-Qaida?" Photo credit: Reuters Pictures.