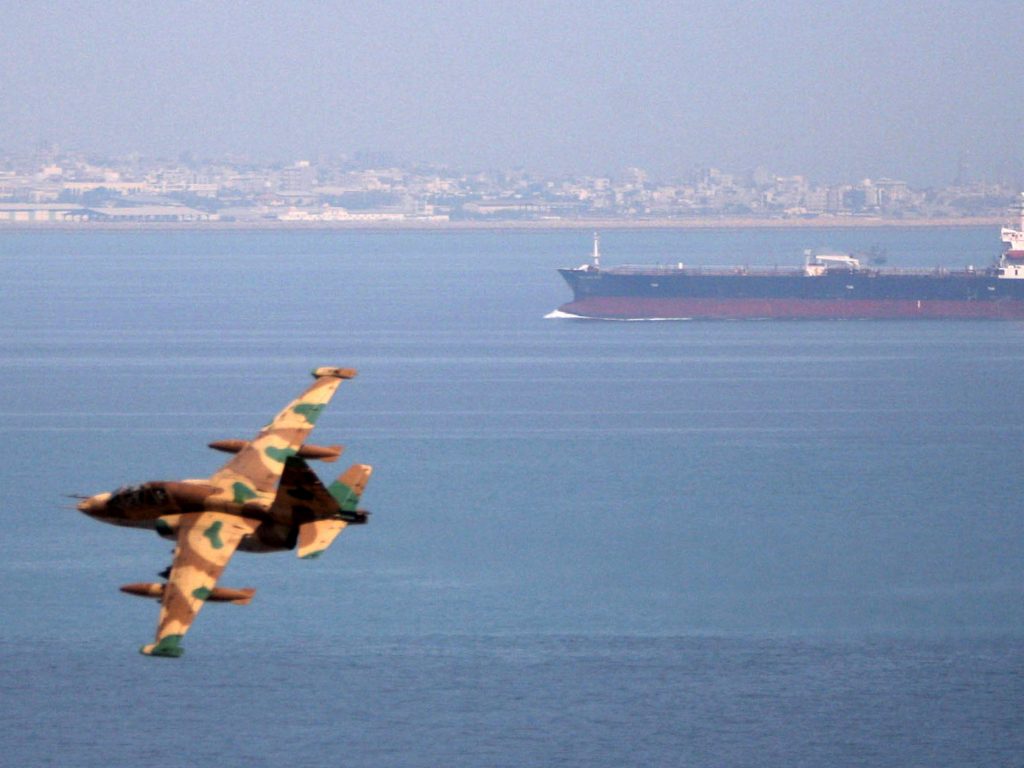 Iran’s Islamic Revolutionary Guard Corps (IRGC) announced that it seized a British tanker in the Strait of Hormuz on July 19, and a second British-owned tanker was boarded before being released, in the latest escalation over control of one of the world’s most vital energy trade waterways.

The first tanker, the Stena Impero, was seized by Iranian boats after it ignored warnings to stop, according to Iranian officials. The second tanker, MV Mesdar, operates under a Liberian flag but is owned by UK company Norbulk Shipping.

On July 5, an IRGC commander threatened to seize British oil tankers in the Gulf in retaliation for the detention of an Iranian tanker near Gibraltar on July 4. British officials believed that the Iranian tanker—a Panamanian-flagged vessel named Grace 1—was on course to deliver oil to Syria in violation of EU sanctions. On July 10, Iranian boats attempted to stop a British oil tanker in the Strait of Hormuz but were forced to back off when a British navy vessel approached. During a phone call with Iranian Foreign Minister Mohammed Javad Zarif on July 13, British Foreign Secretary Jeremy Hunt offered to return the Grace 1 to Iran provided Tehran not use the vessel to ship oil to Syria. The government of Gibraltar announced earlier on July 19 that it would extend its detention of the Grace 1 by another month.

Hunt said on July 19 that Iran’s actions to the two British tankers were “unacceptable,” and that the United Kingdom is working to “swiftly secure the release of the two vessels.” The seizure of the British tanker comes just one day after US officials claim that the USS Boxer shot down an approaching Iranian drone in the Strait of Hormuz. In response, US President Donald J. Trump on July 18 advised “other nations to protect their ships as they go through the Strait and to work with us in the future.” Trump said on July 19 that “we will be working with the UK,” to protect their ships in the Strait.

Tensions between the United States and its allies and Iran have risen since Iran announced that it would be reducing its compliance with the 2015 nuclear deal—known as the Joint Comprehensive Plan of Action (JCPOA)—following the United States’ decision to withdraw from the deal in 2018 and reimpose sanctions.

The seizure also occured at a delicate time for the United Kingdom, as the results of the Conservative Party leadership election—pitting former Foreign Secretary Boris Johnson against current Foreign Secretary Jeremy Hunt—will be announced on July 23, with the winner assuming the office of prime minister on July 24.

Atlantic Council experts respond to the seizure of the British oil tankers and the rise of tensions in the Persian Gulf.*

“This escalation is the direct result of the US decision to quit the Iran nuclear deal and try to impose an embargo on the export of Iranian oil. Even during the 1980s, the United States did not do that. Iran’s response, however, will only make a bad situation worse and risks touching off a new conflict with the United States.”

“The detention of the UK-owned Stena Impero is of course retaliation for the arrest of the Iranian-owned tanker Grace 1 by Royal Marines off the coast of Gibraltar last week. Britain said the ship was contravening EU sanctions against Syria. Iran, which is not bound by EU sanctions, described the seizure as an act of piracy.  An Iranian response was as predictable as night following day.

“It’s unfortunate that the UK finds itself in the middle of this spat since it has been in the forefront of EU countries, with France and Germany, in seeking ways of allowing Iran to receive the economic benefits to which it is entitled under the 2015 nuclear deal, despite the blocking efforts of the United States.

“With tensions around the Straits of Hormuz already running high, the principle of freedom of navigation needs to be restored quickly. That will require nimble diplomacy from the British government, despite the distraction of the Conservative Party’s leadership contest, and—at least in the short-term—a reinforced naval presence  to protect shipping against further attacks of this kind.”

“Iran is suffering tremendously under the weight of US sanctions that are destroying its economy and stymieing development goals shared by numerous political factions. It wants to make sure the world feels its pain, and clearly trying to ratchet up tensions by spooking the United States and its allies.

“In the view of Tehran, the EU and UK were getting the benefits of the JCPOA without shouldering any of the burdens. With its latest actions Iran is showing that era is coming to end. Each cycle of provocation risks a potential backlash for which Iran considers itself prepared. It has long ago gamed out a few nights of US airstrikes and believes they will pose no existential threat to the regime.”

“When the British seized an Iranian oil tanker in Gibraltar on July 4, the Iranians called it an act of piracy and said they would retaliate. To the Iranians, the seizure of a British oil tanker is spiteful payback for that incident.

“It’s worth noting this is the second tanker the Iranians captured this week. The MT Riah was taken on July 14 reportedly for smuggling 1 million liters of oil, or less than 3,000 barrels.”

“Iran’s seizure of two British oil tankers today stopped this week’s slide in the price of crude, but the ultimately tepid market response—Brent ended the day about fifty cents higher than where it started, but was still down about $5 on the week—suggests that the downward price pressure on oil is still far greater than the perception of geopolitical risk in the Strait of Hormuz. The International Energy Agency has recently indicated it will revise its projected oil demand growth for 2019 down for a second time, from 1.5 million barrels per day originally to 1.1 million barrels per day now. And oil production outside the Gulf remains robust, particularly in the United States.

“Markets reacted much more dramatically—in the opposite direction—to announcements earlier in the week from US Secretary of State Mike Pompeo that Iran was willing to negotiate on their ballistic missile program and suggestions from Iranian Foreign Minister Zarif that Iran could reopen discussions about its nuclear program. This geopolitical optimism reinforces bearish market sentiment.

“While a number of interpretations of Iran’s actions today are possible, if Iran used the seizure of the ships to demonstrate that they could still influence oil prices, a key sensitivity for President Trump, what seems clear is that in these market conditions, their actions would need to be far more dramatic to have a serious impact. Fortunately, that seems unlikely for now.”

“In the past thirty-six hours, Iran had seized two tankers in the Strait of Hormuz and the [oil] market barely blinked. The muted price response over that period suggests that despite a series of smaller ‘tit-for-tat’ escalations and de-escalations over the past few weeks, the market is preoccupied with headwinds on the demand side—in particular a murky economic growth forecast and the US Energy Information Administration’s recent downgrade of global consumption.

“Nonetheless, the lack of response to geopolitical volatility suggests that because demand concerns have so consistently prevailed in the past few months, the market might not be pricing geopolitical risks to supply into the market as heavily as they were earlier in the year. So as US-Iran tensions begin to take a more brinksmanship-like tone, the risks of the market being caught sleeping by a true crisis caused by a miscalculation or accident will only grow.”

“Iran has seized on weaknesses amongst its adversaries in choosing a British-owned vessel. The UK, once the imperial power in the Gulf, is now at a low ebb and poorly placed to respond to this crisis.

“Britain has tried to flex its muscles recently by seizing an Iranian tanker off Gibraltar, and this seems aimed at retaliating—in a way that makes clear that Britain can’t even defend its own merchant shipping. This is an embarrassment for London and it sets back any effort by the West to approach Iran in a coordinated way.

“UK decision making will be fragmented. The UK Prime Minister, Theresa May, has announced she will step down and it will be the middle of next week before we know her successor—it’s assumed that will be Boris Johnson. The UK Foreign Secretary is also in the running and so probably has other things on his mind.

“Traditionally, Britain would work with its ally the United States on this problem. Now, they are on different sides of the argument over the future of the JCPOA, with Britain trying to support its continuation while the United States has rejected the accord. And Britain is between ambassadors in Washington after Kim Darroch, the last incumbent, was humiliated in a transatlantic spat. UK-US relations are at a low ebb. Meanwhile Britain’s allies in Europe are contemplating its imminent departure from the EU.”

“This is a new nadir on UK-Iranian relations. Elements include the Gibraltar ship seizure, the Nazanin Zaghari-Ratcliffe case, the dispute over the Iranian breach of JCPOA, and the Iranian feeling the UK and other signatories are not doing enough to compensate for the US withdrawal.

“Is Iran (or should we say the Iranian Revolutionary Guard) focusing on British ships because Britain is a much less dangerous target than the US? Britain has been a prime cause of Iranian concern (and anger) for over a century. What’s more, every time the UK says it is withdrawing from the Gulf, it comes back.

“Are they prepared to attack British ships because they think either that British warships (and there are only a couple of them) are too few or too ineffective to pose a serious threat to Iranian actions.? Do they think that the recent strains in UK-US relations (the Kim Darroch fiasco) make it unlikely that US warships will step in to protect UK vessels?

“Or is there a simpler explanation: how many US-flagged tankers are there in the region these days?”

*This is a breaking news event. Please check back for more analysis.