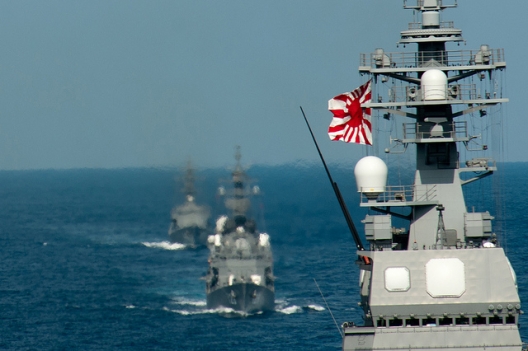 The ongoing dispute between China and Japan in the South China Seas has led to increased focus on the future of Japanese security. Since the end of World War II, Japan’s constitution has forbidden it from developing a military, but Japanese Prime Minister Shinzo Abe has indicated his desire to develop a more active security role for Japan. As the United States currently has a strong military presence in Japan, particularly with its bases in Okinawa, the prospect of Japanese militarization may be viewed with some hesitance, especially for those who fear such an action would provoke China. However, on the balance of things, Japan’s militarization would actually benefit the United States.

There are two cases to be made for the positive impact of Japanese militarization, one economic and one strategic.

The economic case is fairly straightforward. Japanese militarization will decrease the need for US resources to defend Japan. Given the continuously sluggish economy, decreasing American military presence in Japan could free up money for other priorities, without leaving our close ally out to dry. It will also bolster future containment of Chinese power in the Pacific without creating an additional drain on American resources. With Japan as a contributor, rather than a recipient, of military aid, the security of the Asia-Pacific region could be enhanced without an extra American dime spent.

The strategic argument is a bit more delicate. Japanese militarization would give China a much more urgent military threat than the United States. Tensions between China and Japan are already fairly high over the Senkaku/Diaoyu island dispute. If Japan develops real military power, tensions will only increase, putting the United States in the perfect position to negotiate between the two Asian nations. With Japan as an independent military actor, the need increases for an external power with close relations with the Japanese to prevent tensions from escalating. The United States is the most logical option to fill that role. Our diplomatic leverage vis-à-vis China would increase, but the direct risk to the United States would remain minimal.

There is no doubt that any increased military power in Japan would need to walk a fine line. Massive militarization could pose a severe threat to regional balance, and provoke either China or North Korea into pre-emptive action against Japan. Furthermore, many Asian countries, particularly China, have long memories when it comes to the history of Japanese military power, and its accompanying atrocities in World War II. The last time Japan was a major military power was horrific for China, Korea, and much of Southeast Asia. The refusal of the Japanese political elite, including Prime Minister Abe, to acknowledge those horrors makes the specter of Japanese military power that much more threatening, and thus delicate to enact.

However, much like Rome, military prowess is not built in a day. It will take several years, if not decades, for Japan to build up cohesive and functional military power. Furthermore, there are many different levels of militarization. I am not suggesting that Japan should become a major military actor in the next ten years. But limited militarization, enough for Japan to have some power projection capabilities, but not enough to invade its neighboring countries, would be reasonable.

Another stipulation is that, Japan cannot be allowed to develop nuclear weapons. As a signatory to the Nuclear Non-proliferation Treaty (NPT), Japan has already agreed not to develop nuclear weapons.  Furthermore, given the 2011 nuclear disaster at the Fukushima reactor, not to mention being the only victim of a nuclear attack, weaponizing nuclear technology is likely unattractive to Japan. Nevertheless, if the Japanese constitution is rewritten to allow the development of a military, it should reaffirm that Japan does not and will never seek nuclear weapons. This will allow China to keep its trump card, and hopefully decrease the perceived threat of a newly militarized Japan.

While it would be a delicate process, the United States would benefit both strategically and economically from militarized Japan, provided it remains limited to an extent. Stronger close allies benefit the United States, particularly in the Asia-Pacific region, which will only become more important in the coming decades.

Kathryn Alexeeff is a research assistant with the Atlantic Council’s South Asia Center.