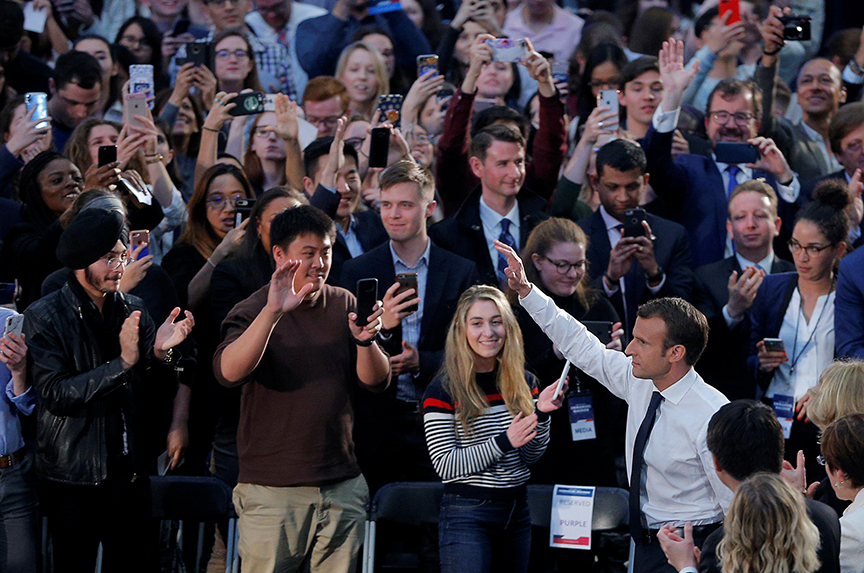 Whatever the policy outcomes on individual issues, Emmanuel Macron’s three-day state visit to Washington, from April 23 to April 25, will have succeeded in one goal which is surely at the top of the French president’s agenda: to “Make France Great Again.” He did so by assuming the mantle of the leadership of the West, by acting not only as president of France, not only as president of Europe, but also as president of the free world. In so doing, Macron positioned himself as the equal of the American president, something no other world leader could contemplate today.

It was naïve to think—and it was never suggested by the Élysée Palace or by French diplomacy—that Macron would somehow be able to pull policy rabbits out of hats during his state visit. First, that would require that US President Donald J. Trump be predictable and consistent, which he is not. Beyond that, the circumstances of a state visit mean that ceremony, pomp, and symbolism generally prevail over substance. However, en même temps (at the same time: an expression for which Macron is famous), Macron managed to exploit every opportunity which the state visit offered to put France at the center of attention—in the bilateral relationship with the United States, as the leader of Europe, and with clearly stated policy positions on all the major global issues of our time.

Macron’s speech to a joint meeting of Congress, in particular, served three purposes simultaneously: recalling and reinforcing the historical importance of the French-American relationship, with multiple references to American presidents (Washington, Lincoln, Theodore and Franklin Roosevelt among others); providing clear stances on a multitude of policy issues (“That’s my position”); and, not least, articulating a political philosophy (the powerful series of “I believe”) in defense of “a new breed of multilateralism,” rejecting nationalism and isolationism outright, very much biting the hand of Trump that had fed him at the state dinner the evening before.

Macron pulled no punches in asserting that Western values are in danger from within, including from within the United States, and that free peoples must band together to tackle issues of climate change and populism as well as terrorist threats and non-democratic governance models promoted by “other powers” (China and Russia in the forefront).

Through the combination of his dignified demeanor, his eloquence, his professionalism, his mastery of the issues, and his clearly being at ease with himself, Macron impressed Americans, and others around the world, as the kind of man that Americans, and others around the world, would be happy to have as president of the United States. This acceptance of Macron as a world-class leader entitled to independent opinions was clear even in Congress, though it’s not certain the senators and representatives fully understood the intricacy and underpinnings of Macron’s world view, and it was certainly etched in stark relief during Macron’s remarks during his town hall meeting with students from George Washington University.

Americans have become accustomed to viewing Europe through an Anglicized lens, relying on British sources, particularly the high-end press, for their interpretation of Europe. This partly results from the limited number of Americans who read the non-English-speaking press. What was striking about the British media during the week, and the reaction of British people, was how perplexed they were at seeing the president of France interacting the with president of the United States as a peer; and then hearing that same president of France take policy positions diametrically opposed to those of Trump, who clearly adores Macron, to the point of “bromance.” What this British perplexity fails to comprehend, however, is the significantly different nature of the French-American relationship from the Anglo-American one.

Since Winston Churchill and Franklin D. Roosevelt, Britain has stood side-by-side with the United States, but always in a junior position. Since Charles de Gaulle and Franklin D. Roosevelt, France has insisted on standing face-to-face with the United States, at the same elevation, in a spirit of indépendance nationale. Macron capitalized completely on this contrast.

As a result, he leaves Washington with still greater prestige as the effective president of Europe. German Chancellor Angela Merkel arrives in Washington on April 27 for a working trip when the city will still be festooned with the banners of the French state visit. Nothing could be more unambiguous in revealing Germany as the minority partner, for the first time in living memory, in the Franco-German couple. Merkel’s job henceforth will be to manage her coalition, tempering some of Macron’s loftier ambitions perhaps, but with little or no power of initiative devolving to Germany.

The United States alone has lost the legitimacy, under Trump and probably under Barack Obama before him, to be able to propose a comprehensive solution to an international problem which all the other major powers would be prepared to pursue under American leadership. However, in the case of the Iran nuclear agreement and the Syrian war, for example, Macron and the France he leads do have the clarity of purpose and legitimacy of acceptance to pursue policy solutions in both areas, but only so long at the United States is not opposed. So, the American position Macron seeks is the lack of a negative, rather than the proof of a positive.

Macron has said he thinks that Trump will not re-certify the Iran nuclear agreement; he has also said that France will not leave the deal but that he would like to see it subsumed under a larger agreement, where the Joint Comprehensive Plan of Action (JCPOA) would be the first of four pillars, with the other three covering Iran’s long-term access to nuclear weapons, its ability to manufacture ballistic missiles, and above all its behavior in the Middle East, especially its support for terrorist or rebel groups. Macron seems to have convinced Trump of the danger of leaving the JCPOA but has not yet convinced him actually not to leave it. On that issue, Macron did what he could and what he should: express a strong French position, convey it clearly to the American president, state it unequivocally before the American Congress, and look for a compromise solution, the four pillars, that should preserve the agreement and satisfy Trump’s concerns. But, once again, it would be naïve to think—and, once again, it was never suggested by the Élysée Palace or by French diplomacy—that Macron would be able to do more than that.

For Macron to leave Washington with an enhanced image in American eyes of himself and of France, a heightened awareness on the part of Americans of the importance of the French-American relationship, an almost squeamishly intimate relationship with the American president apparently still intact, and a clearly defined and boldly stated set of progressive multilateral policy positions that bestow on him an even greater leadership role in Europe and on global issues—even if there is still a lot to be done, even if the proof will require tenacity and time, still, it’s not bad for three days’ work.