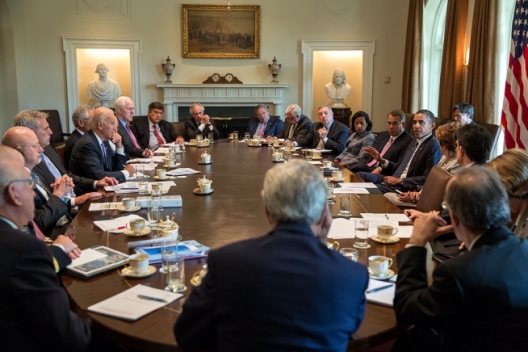 For more than two years President Barack Obama has resisted the clamor of the interventionists, avoiding military moves against Bashar al-Assad’s regime for fear of being sucked into the vortex of Syria’s horrific and complex civil war.

Though we won’t know until the Congressional vote the president has sought is held, this may be about to change following an August 21 chemical weapons attack on a Damascus suburb that according to Secretary of State John Kerry killed 1,429 people, more than 400 of them children.

Mr. Obama insists that evidence gathered by America’s intelligence agencies proves that the Syrian government was the perpetrator. Almost exactly a year before this event, he drew a “red line,” declaring that his “calculus” would change were Assad to use chemical munitions.

This is not the first such allegation against Assad, and President Obama will now be forced to cross the Rubicon unless Congress withholds authorization. His own red lines, drawn unwisely, have boxed him in, and if he does nothing beyond expressing outrage he will lose credibility. Or so goes the ubiquitous argument.

Yet credibility is itself not a sound or sufficient reason for attacking Syria. In international politics, acquiring and maintaining a reputation for resolve is not an end per se but a means that states use to achieve intended outcomes. But what is the outcome Obama seeks in this particular instance? Don’t look to the White House for answers.

The president has said that the attack would not seek the destruction of Assad’s government but would instead be conducted in a “a very limited way” to send a “shot across the bow.” This means that the Syrian strongman may take a big hit but still retain enough firepower and troops to continue his killing spree. He will lose many expensive aircraft and helicopters, but these are not the armaments that account for most of Syria’s death toll.

Perhaps Obama’s goal is to destroy Assad’s chemical weapons stockpile or to prevent it from being plundered by terrorist groups, such as al-Qaeda, which are now ensconced in chaotic, blood-drenched Syria.

But that theory is implausible. In addition to risking the dispersion of deadly toxins, striking Assad’s chemical weapons sites could leave them less well defended for at least two reasons. First, if the attack diminishes the regime’s capacity to safeguard these munitions terrorists could pilfer them more easily. Second, anticipating an attack, Assad might order that they be moved, and that could enable a chemjacking.

It’s conceivable that although the administration’s aim is not to topple Assad, it believes that he will not survive for long after absorbing a massive blow directed at his major armaments, airfields, and command and control centers, and even some of his best military units, such as those within the Republican Guard and the Fourth Armored Division. Even if that’s not the outcome foreseen by the White House, it could happen anyway.

The problem is that end of the regime will not produce an end to the war. The House of Assad’s surviving cliques and organizational detritus will provide the raw material for forming paramilitary forces — which already exist, as witness the shabiha–that will continue the battle against the various armed anti-Assad Sunni groups. Given the regime’s massive bloodletting, its members, and even their families and associates, cannot expect mercy from their enemies, and so they have compelling reasons to fight to the finish with no holds barred.

Part of their survival strategy will involve fortifying further the Alawite (the Shiite-offshoot minority sect of Assad and his inner circle) fortress that has already emerged between Syria’s coast and the Jabal an-Nusayriyah range.

For their part, the Sunni fighters, their morale boosted by Assad’s fall, will hunt down pro-regime elements and overrun government-controlled territories with even greater resolve. And they won’t be compassionate during what they will consider the end game.

Fearing that a Sunni victory could dash their dream of independence, or a state within a state, Syria’s Kurds will redouble their efforts (which have been backed by their kin in Iraqi Kurdistan) to turn their northeastern domain into a secure homeland. That will increase the tempo of the fighting that has already been underway between them and radical Sunni groups determined to keep Syria whole.

So while President Obama seems poised to attack Syria, it’s not clear what he intends to achieve, apart from saving face.

The horror of 1,400-plus people being killed by chemical weapons may have moved him, but he has watched as almost 100 times as many Syrians have perished. The strike he envisages will not end Syria’s bloodbath; that will require bigger steps, ones that neither President Obama nor the American public is prepared to take.

Well, perhaps at least no more Syrians will die from chemical attacks once Assad is hit and learns a lesson. That’s possible, but the civil wars of that have erupted just in the last two decades — think of Rwanda, the Congo, Darfur and the southern Sudan, and the former Yugoslavia — reveal an awful truth. Once their societies dissolve, as Syria’s has, into groups that lionize themselves and dehumanize their enemies, people excel at devising ways to kill one another. The moral restraints of normal times quickly fall away and violence against those who have become “the other” is valorized.

The atrocities that inevitably follow evoke moral outrage from outsiders. The advocates of “humanitarian intervention” assure us that we now inhabit a more enlightened (post-Cold War) world that has effective, universal norms against mass killing. The reality is that even the most powerful among the governments that trumpet these norms have been willing to countenance a great deal of killing; so have their citizens.

Countries capable of military intervention may act — albeit from safe distances to ensure zero-casualty campaigns a la Bosnia, Kosovo, and Libya — when they expect that the cost they will incur in blood and treasure will be low or believe that important national security interests are at issue, but not otherwise.

Whatever Obama does in Syria will not break this pattern.

Rajan Menon is the Anne and Bernard Spitzer Professor of Political Science at the City College of New York/City University of New York, a nonresident senior fellow at the Atlantic Council and the author, most recently, of The End of Alliances (Oxford University Press, 2007). This piece first appeared on Huffington Post.