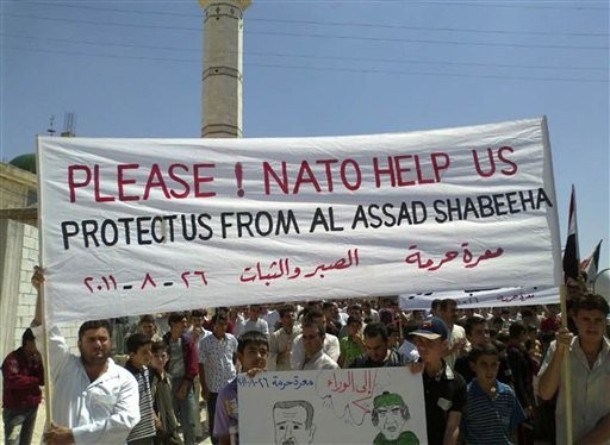 As noted in yesterday’s installment, the prospects of solving the humanitarian crisis in Syria through air power alone are nil. Today, we assess the options from the ground.

Ahmad Al Attar and William J. Moloney recently outlined the most provocative plan for foreign intervention so far – and one that probably has the most realistic assessment of Syrian and Free Syrian Army (FSA) military capabilities. Their remedy is a massive joint operation, involving a Turkish offensive to cut off minority populations from Damascus, concurrently with a Jordanian and Gulf Cooperation Council (GCC) offensive to seize Damascus. This would occur under the aegis of NATO air and intelligence support.

While their assessment of the inadequacy of Syrian rebel forces is accurate, their remedy may not be politically sustainable. Any hopes of a quick repeat of Operation Iraqi Freedom would likely be bogged down by the significantly lower disparity between regional ground forces and Syria’s own. There would be significant casualties for invading forces, and the invasion would likely take significantly longer than the one which ultimately felled Saddam Hussein. Would Turkey, Jordan, and GCC countries be willing to bear the military costs of a sustained assault? Would the Gulf monarchies be willing to devote military resources away from their own countries when the more immediate threats of local uprisings and conflict with Iran?

Additionally, from a humanitarian perspective, one must consider the extended period of military mobilization and logistical pre-positioning for such an operation to take place. During that phase, it is quite likely that Syrian forces would accelerate their killing of groups which could aid the impending invasion. As Daniel Larison pointed out, the two interventionist objectives of hastening Assad’s downfall and limiting the slaughter he inflicts on Syria are not always compatible.

So, if creating a safe zone is militarily ill-advised, and an Iraq style invasion seems neither forthcoming nor a particularly good use of resources, the most likely result of the intensifying internal fighting in Syria is a drawn out civil war – probably one increasingly fueled by outsiders. Already, many are calling for the United States to begin supporting the arming of FSA forces, in addition to providing them with air support. But these measures – even if combined with an aerially-enforced “no fly” or “no drive” zone, are likely to result in protracted civil war so long as the inexperienced and disorganized FSA tries to gain strength, resist Syrian assaults, and eventually launch offensives against the Syrian security.

While enforcing an arms embargo is not going to do the United States any favors, the arguments against U.S. weapons sales or gifts to Libyan rebels hold even more true for Syria. And, as in the case of Libya, there will likely be other powers willing to supply the Syrian rebels anyway – and of course training and organizational competency, not arms, are going to be the real prerequisites for triumphing against the elite and upper-tier Syrian security forces.

What the United States does have a strong interest in doing is conducting an assessment of the changing political terrain in Syria. It was likely quite ill-advised that the United States held off a serious expansion of its efforts to vet the Libyan rebels until it actually began the air campaign to support them. Whatever comes out of the Syrian civil war, the United States ought to avoid being blindsided. The purported release of Abu Musab al-Suri, if true, would be a portent of a potential influx of jihadists from Syrian prisons into the open, and the Sunni-led struggle against Assad may yet attract other jihadist groups. Whether the release of jihadists is a deliberate Syrian ploy to dissuade American intervention, or results from the capture and liberation of prisons by opposition forces, the Arab Spring has led to some unwelcome homecomings for jihadists and Syria is not likely to be an exception.

Gaining an accurate picture of the motivations of FSA and opposition members, the composition of the sundry armed militias and unarmed political groups under the broader banners of the FSA and opposition, are all of serious concern to the United States. Identifying rebel leaders, potential threats, and making initial contact with Syrian opposition and rebel forces would fall primarily under the aegis of the intelligence community, especially the CIA, and would entail a minimal operational footprint.

Of course, any collection of human intelligence is going to involve some give and take. One relatively low-risk way of providing support would be selectively providing intelligence to gain the confidence of rebel leaders. In any case, stepping up signals intelligence and geospatial intelligence gathering in Syria is an important mission anyway, particularly as the civil war drags on. As in the case of Operation Cedar Sweep over Lebanon, the United States could fly signals intelligence missions skirting (but not penetrating) the Syrian border either from British airbases in Cyprus (if Britain is willing to permit it) or those in Incirlik.

Actual missions to penetrate Syrian airspace would likely require the use of unmanned aerial vehicles, based out of the existing drone station at Incirlik. These are expendable and avoid the need for significantly suppressing Syrian air defenses.

Another important question in the event of a drawn civil war in Syria, and indeed, one still vital should Assad fall, would be counter-proliferation operations to secure or destroy Syrian chemical and biological assets. Known or potential Syrian chemical or biological weapons sites are located at Aleppo, Al Safir (near Homs), Homs itself, Hama, Palmyra, Latakia, and Cerin (possibly the site of a biological weapons program) – in other words, mostly cities in Western Syria, in some cases quite near the coast or Turkey. These sites are not nearly as isolated as Gaddafi’s secret stockpiles in the desert were, and even if vigorous air support were approved, it would be difficult to prevent Assad’s forces from accessing them by denying roadways. Accordingly, the deployment of SAD and – potentially – JSOC’s “render safe” capable units would be necessary. At the very least, “render safe” capable special mission units would likely need to be mobilized at Incirlik or afloat. Because counter-proliferation and associated operations fall under Title 50, these operations would be covertly conducted.

Support for such an operation would likely involve the use of U.S. forces assisted from Turkey and from Souda Bay, in Crete. Maritime support could entail the diversion of assets from the 6th Fleet to the creation of a Joint Task Force-Lebanon styled maritime force. Tracking the activities of personnel and matériel associated with the Syrian WMD program, and, if necessary, interception, would be likely missions. For air support to even be a viable policy option, JSOC units, supported by SAD, would probably be necessary on the ground, as they were for the Israeli strike on Syria’s nuclear program. While such strikes are by no means automatically necessary, they would be far more militarily feasible and strategically sensible than an open-ended aerial commitment to liberating Syria – but without adequate intelligence, the proximity of these depots to Syrian forces would make time sensitivity a severe issue.

Next: The Illogic of Intervention

Daniel Trombly is writer on international affairs and strategy. This essay is based on a longer piece at his blog Slouching Towards Columbia.