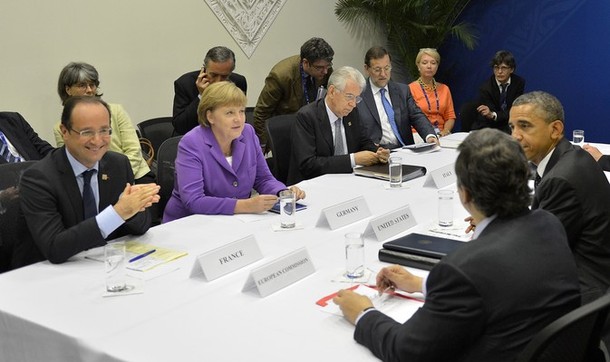 Europe, or rather the idea of Europe, has long been a part of American politics. In fact, Old World/New World distinctions—embodying the doctrine of the two spheres—predate the independence of the United States. Americans for most of their history have been identified—and have identified themselves—in contradistinction to Europe.

The American political tradition, like its legal tradition, is adversarial. So it’s no surprise that “Europe” should be subject to partisanship come election time. Nineteenth and early twentieth century candidates regularly decried the presumed vices of the Old World or appealed to nostalgia for it in courting the votes of immigrants: “Nativists” would lump immigrants with the lands from which they came in general categories of insult; populists would charge Wall Street bankers with having sold out the country in corrupt bargains with European syndicates; pacifists would charge politicians and “merchants of death” with dragging America into European wars; jingoists would spread panic about dangerous European ideologies and ideologues making their way across the Atlantic. And so on.

Yet many Americans continued to admire Europe and European culture. They kept ties with families there and they visited as tourists, missionaries, merchants, and investors. Not only were the political worlds of America and Europe intertwined, so too were their societies at all levels.

Woodrow Wilson recognized this—according to some, belatedly—in 1917 when he told the American people that they had no longer had a choice to stay out of European entanglements. The United States was, whether it liked it or not, a world power. Many people did not believe him and proclaimed themselves “isolationists” right up to the attack on Pearl Harbor in 1941. The important thing to remember about isolationists (and later, exceptionalists) in both parties was that they directed their ideology mainly against Europe.

That is how, for example, the Republican Party could be home to both imperialists and isolationists. Both were opposed to Wilson’s “New World Order.” Yet some in the GOP—the descendants of Theodore Roosevelt and Henry Cabot Lodge—promoted a heavy role overseas, especially in Latin America and East Asia. After 1941 some of them pressed hard for giving priority to the Pacific War over the war in Europe. And following the war they were among the first to argue that the destiny of “the West” would be won in the East in a victory over Communism there. Thus by the middle of the twentieth century, for one reason or another, the Republican Party became the Asia-first party.

Dwight Eisenhower put a temporary end to that. His career, and arguably his mental map, was Eurocentric. He continued the process begun by Arthur Vandenberg and others in his party to support the foreign policies launched by his Democratic predecessor and worked to limit the diversionary potential of the Korean War and other Asian conflicts. Europe would remain the central focus of U.S. foreign policy. Then an interesting thing happened.

The ideology of the New Frontier proclaimed that Africa, Asia, and Latin America were the places to be. The Europe of the war and the Marshall Plan was passé, at least politically (cultural tendencies were another matter). Then came the Vietnam War. Now the Democratic Party was also an Asia-first party.

America and Europe drifted apart in the 1960s and 1970s. Isolationism was resurrected, only this time more prominently on the political Left. It took two Republicans who made their careers in the Midwest and later in California—Ronald Reagan and George Shultz—to reverse the trend. By the early 1980s, then, U.S. foreign policy again placed its emphasis on Europe. And, as some have argued, with a positive result.

However, the politics of the period also included an attack on the theory and practice of the welfare state. For various reasons (probably having most to do with Margaret Thatcher’s contribution at the outset) its home was seen to be in Continental Europe, where policies dating back more than century had once inspired many American progressives. At some point—when exactly it is not clear; I am tempted to date it to P.J. O’Rourke’s infamous 1986 “Euro-weenies” essay, although it rested on long-standing biases—“Europe” became synonymous with socialism, pacificism, multilateralism, and a number of other un-American vices.

The image persisted beyond the end of the Cold War, even though Bill Clinton’s decision to jump on the bandwagon of NATO enlargement and, after a long delay, to intervene militarily in the wars of Yugoslav succession, had the advantage of co-opting many Republicans to his foreign policy. (Jesse Helms, for example, never opposed a single one of Clinton’s European policies; he preferred to focus on Cuba and budget cuts.) So, too, the George W. Bush administration, despite its early pledge to go East against the Chinese “peer competitor” and Donald Rumsfeld’s later quip about “Old Europe,” ultimately found its most loyal partners, and spent much of its energy, in Europe. The Obama administration, in spite of its “pivot” to Asia, has seen something similar happen more recently.

This marks an important shift back in the direction of consensus. Traditionally the Republicans were the Asia-first party and pretty isolationist about Europe. Things were messier on the populist wings of both parties but, generally speaking, the Democrats were more Eurocentric and Europhile. WWII and then Eisenhower put an end to that, at least until the end of the Cold War. Nowadays it seems like the Republican Party is just as Eurocentric, if not more so, which explains why Peggy Noonan recently told the candidates to knock it off with the Old Europe business:

[Romney] and his supporters should drop the argument that if we don’t change our ways we’ll wind up like Europe. That’s a mistake because Americans like Europe, and in some complicated ways wouldn’t mind being a little more like it. In the past 40 years, jumbo jets, reduced fares and rising affluence allowed a lot of Americans, especially the sort who vote, to go there. The great capitals of Europe are glamorous, elegant and old, the outlands are exquisite. What remains of the old Catholic European ethic that business isn’t everything, life is everything and it’s a sin not to enjoy it, still has a lure. Americans sometimes think of it as they eat their grim salads and drink from their plastic water bottles.

When Americans go to Europe they see everything but the taxes. The taxes are terrible. But that’s Europe’s business and they’ll have to figure it out. Yes what happens there has implications for us but still, they’re there and we’re here.

In fact, those denouncing “Europe” these days tend to be Democrats who criticize the effects of austerity policies. Yet it appears that fewer Americans overall think about themselves and their country with reference to Europe. Does this mean it will finally disappear from American politics? Probably not. The United States remains an important world power. And Europe remains a big part of the world. American politicians may not like to talk about Europe in great detail; but they may find it more difficult to earn points with the usual stereotypes about it.

Kenneth Weisbrode is a historian and author of “The Atlantic Century.” Photo Credit: Getty Images