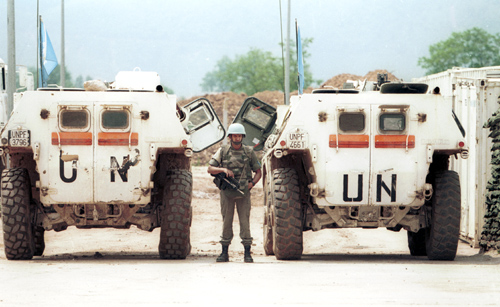 It is now a commonplace belief that a worldwide diffusion of human rights norms occurred following the Cold War, creating a consensus favoring humanitarian intervention. The cachet acquired by the “Responsibility to Protect” (R2P) is proffered as proof of this proposition. This is wishful thinking. Armed humanitarian interventions since the aftermath of the Cold War have been selective, poorly executed, strategically naive, morally incoherent and even dangerous. Far from reflecting, let alone having contributed to, a global consensus, they have been divisive. This is so not because the world has just done it wrong at this early stage of R2P awareness; it is so because of flaws in the concept itself.

States seldom take military action in support of abstract principles except when important interests are also at issue, the risks small, and the cost tolerable.

The Responsibility to Protect (R2P) doctrine, advanced by the international community in the wake of the interventions in Bosnia and Kosovo and non-intervention in Rwanda, attempts to reconcile the perspectives of two different constituencies. The first comprises states and organizations that aver that human beings have certain inalienable rights, above all not to be killed or harmed without just cause, and that the “international community” has an obligation to protect them when these rights are violated. The second consists of states that see sovereignty as fundamental both to international law and to international order. They fear that norms and formulas that facilitate armed intervention within countries will only produce more war and instability.

States have long favored the principle of human rights, so long as it is restricted to words and documents. It is also true that the idea that sovereignty involves duties as well as rights has gained wide support, and not just in the West. But when it comes to common criteria for permitting military action to save lives, the consensus invariably breaks down on both theoretical and practical grounds. Brazil and India abstained in the Security Council on the no-fly zone resolution aimed at Libya (as did Germany). That decision reflected a wider suspicion that humanitarian intervention, no matter its paeans to justice, will be applied inconsistently, and inevitably by the strong against the weak.

This underscores the ultimate problem facing humanitarian intervention. Countries differ on too many dimensions (power and wealth, historical experience, culture and religion, political ideology and national identity) and are too numerous to allow a common standard for authorizing military coercion in support of human rights. As was apparent in the General Assembly debates on R2P at the “World Summit”, what is agreed upon will be general, qualified, non-binding and susceptible to self-interested interpretation. That is because many weaker states cannot get good answers as to who exactly gets to decide whether and when a state has failed to meet its responsibilities, and how the decision would be taken. What would prevent the definition of “responsibility” from expanding and eroding sovereignty? How would people in “rescued” countries hold accountable a UN that, via R2P, acquires power over their lives? There simply are no good answers to these questions, and there cannot be.

The fact is that our world is too heterogeneous to permit a consensus-based redefinition of sovereignty or universally accepted, operationally substantive criteria for armed intervention in response to atrocities. Selectivity and self-interest will, perforce, reign, and that is no prolegomenon for a global agreement on the high-voltage controversy surrounding the circumstances under which force can legitimately override sovereignty. The search for common ground here will be more divisive than unifying, especially when the focus moves from airy statements to the fine print and, above all, to implementation. That is not a bad thing, for the R2P impulse is in practice strategically obtuse, easily subverted, prone to counterproductive outcomes, and, above all, ethically incoherent in its foundational premises.

There is no final fix for mass atrocities in our world, let alone one based on abstractions advanced by a coalition of Davos poseurs and Western academics. In the end, those groups of people vulnerable to abuse need to engage in maximum feasible self-help to reduce their vulnerability. As for the rest of us, we can help sometimes if we’re careful about it, and we probably should, but, said Wallace Stevens, “the imperfect is our paradise.” So it is, and ever will be.

Rajan Menon is the Anne and Bernard Spitzer Professor of Political Science at the City College of New York/City University of New York, nonresident senior fellow at the Atlantic Council and the author, most recently, of The End of Alliances.