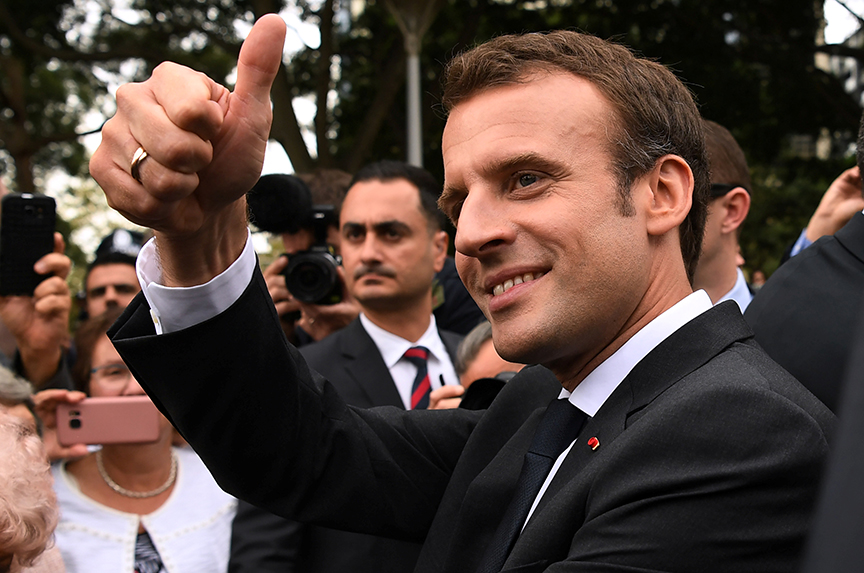 French President Emmanuel Macron gestures to onlookers after a commemorative service at the ANZAC war memorial in Sydney on May 2. (AAP/David Moir/via Reuters)

Emmanuel Macron is on a high. But Emmanuel Macron also has a problem. How he addresses that problem, and whether he can solve that problem, will largely determine his success over the next four years and his chances of re-election for a new five-year term from 2022 to 2027.

Macron climbed to a fresh elevation of prestige last week as a result of his triumphal state visit to Washington. The three-hour working meeting at the White House of the German chancellor, Angela Merkel, paled in contrast to Macron’s three-day extravaganza and showed that, for the first time in living memory, Germany is politically the minority partner in the Franco-German couple. This means that Macron, and France, lead in Europe. And because Macron is the most outspoken champion of retaining the Iran nuclear agreement and the COP21 Paris climate accord, and is in the forefront of seeking peace in Syria, he has leveraged his transatlantic and European status into France once again being at the center of international relations. This week he is further afield, in Australia. Meanwhile, Macron’s reforms at home continue apace, disregarding strikes, protests, and isolated mindless May Day violence in the streets of Paris.

Macron’s paradox is that the French people do not understand him.

Macron has set out his ideas in several books and in his major speeches. He has a clearly developed political philosophy, influenced by Aristotle, Descartes, Hegel, and Kant as well as his intellectual mentor Paul Ricœur. His campaign book, Revolution, contains all the components of his personal background, his political thinking, and his practical program. Additional books about Macron have been published since his election in May 2017, some of them insightful. Like Macron’s major set-piece speeches—at the Sorbonne, at the European Parliament, and most recently before the US Congress—the books have largely gone unread, or at least un-studied, by the population and by the press.

In addition to his philosophical side, Macron demonstrates what Sir Isaiah Berlin called “the sense of reality.” This stretches far beyond mere pragmatism into what Berlin described as “a sense of direct acquaintance with the texture of life; not just the sense of a chaotic flow of experience, but a highly developed discrimination of what matters from the rest.” Macron is therefore especially attuned to what works and what doesn’t. But the French themselves are not enchanted by this kind of results-oriented, change-with-the-wind down-to-earthness. The French are romantics. They want the fulfilment of an ideal, preferably with minimal unpleasantness.

Macron’s values also separate him from the mass of French people. The French view change as a painful interlude, to be kept as short as possible, between two long and comfortable eras of stability. This postpones change for so long that it becomes more painful than it ought to be. Because his predecessors failed to reform, Macron has to implement three decades of change in three years. Change does not daunt him.

Whether because of an oppressive monarchist tradition or a utopian socialist proclivity or both, a large number of French see work as demeaning servitude imposed by some faceless higher authority. Individuals in their own work are motivated by the honor of a job well done, which together with France’s educational system partly explains the high level of French productivity. Still, work is widely considered a necessary evil required to pay the bills and whose purpose is to finance vacations and retirement. Work is not appreciated as a source of personal empowerment. When Macron said in one of his recent nationwide television interviews, “what interests me is the work,” his words are sure, in many cases, to have fallen on deaf ears.

For Macron to solve the paradox of this disconnect with the French requires making the distinction between leadership and influence. Leadership depends heavily on the leader’s own disciplined crafting and control of himself; this Macron has. Influence, which is a facet of leadership, depends on the outreach to “the other.” Charles de Gaulle, who is clearly a role model for Macron, developed the talent of speaking to the French people about themselves, and about France as theirs. Macron’s challenge is not just a communications issue: it entails a shift in political emphasis from himself as the protagonist to the French people not as the objects but as the subjects of policy.

If Macron has to rely on his performance in office and his campaign organization, as superb as both might be, he still runs the risk of losing popular support and possibly losing the next presidential election in four years’ time. In order to perpetuate his success, he will have to convey his philosophy, his sense of reality, and his values to the French people as their own.

Nicholas Dungan is a nonresident senior fellow at the Atlantic Council’s Future Europe Initiative, a senior research fellow at the French Institute of International and Strategic Relations in Paris, and an adjunct professor at SciencesPo, where he teaches “Strategies of Influence.” Follow him on Twitter @Nicholas_Dungan.