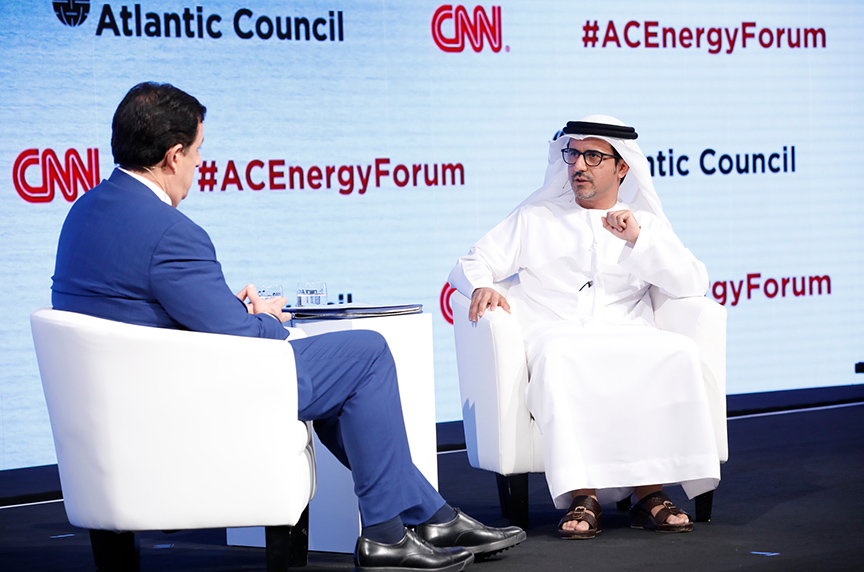 Stabilizing petroleum prices, “peak oil,” and the implications of a possible collapse of the Iran nuclear deal dominated a January 13 panel discussion in Abu Dhabi on the long-term future of the Organization of the Petroleum Exporting Countries (OPEC).

But for now, OPEC’s fourteen members have little to worry about, Mohammad Barkindo—the organization’s Nigerian secretary general—assured participants on the second and final day of the Atlantic Council’s Global Energy Forum.

“We have survived so many funerals, and we are so proud of being the proverbial cat with nine lives,” said Barkindo, who in August 2016 assumed leadership of the Vienna-based organization for a three-year term.

“Thanks to the visionary leadership of our ministers from OPEC and non-OPEC countries, together for the first time we are building this global platform,” he said, in reference to a November 2017 meeting in which OPEC, Russia and nine other global oil producers agreed to slash oil output by 1.8 million barrels a day until the end of 2018. “We have turned the page, I think, and when the final chapter is written, what we did with our non-OPEC friends will be written in gold.”

Nigeria and Libya were exempted from the deal, but both OPEC member countries agreed not to increase their output above 2017 levels.

Overall, said Helima Croft, managing director and global head of commodity strategy at RBC Capital Markets, the issue of cheating on quotas has been overblown.

“Where does spare capacity lie? Basically, in the [Gulf Cooperation Council] countries and Iraq,” she explained. “Look at a country like Venezuela that’s not in a war zone. Its GDP has contracted by 30 percent over the last two years. No country is suffering as much, and they would obviously be a candidate for increasing production, but their production is falling rapidly. Libya would be another candidate to increase production if they could. But they probably cannot.”

More urgently, Croft warned that she sees the Iran nuclear deal falling apart three months from now. On Jan. 12, US President Donald J. Trump declined to impose new sanctions on Iran—keeping the Obama-era deal alive for now—but he warned that this was the last time he would ever sign such a waiver.

“Iran needs foreign investment to grow production, and now we have this lingering threat of a snapback [on sanctions],” Croft said. “I can’t imagine a situation where the Iranian government will make all those restrictions on its nuclear program permanent. Will foreign companies be eager to go back and invest in Iran? I don’t think Iran is a candidate to break its quota, because they don’t have the capacity to increase production very much. That deal is really on life support at this point.”

Asked about Iran—OPEC’s third-largest oil producer—Barkindo said the cartel “will always try to encourage peace and stability” throughout the Middle East.

“Since its inception in 1960, OPEC has tried everything possible—and with great success—[to insulate] the organization from geopolitics to enable it to continue to function, based on its principles as oil producing and exporting countries,” said Barkindo, recalling the war between Iran and Iraq that lasted from 1980 to 1988.

“On the whole, demand has not been this robust for so many years, and global economic growth has not been this healthy since before the last financial crisis,” the OPEC chief added, citing the International Monetary Fund’s estimates of 3.7 percent growth for 2018 and rising continued worldwide prosperity.

That, he said, means global demand for oil will continue rising, rather than peaking any time before 2040.

“The US is near full employment, and between now and then, an additional 1.8 billion people will be coming into this world,” Barkindo said. “Right now, we have over two billion people in Africa, Asia and South America without access to commercial energy. So, oil and gas will continue to dominate the energy basket. We have nearly 1.5 trillion barrels in total reserves. How can you leave those assets stranded while so many people are living in acute poverty?”

Regarding the recent violent street protests in Iran and the potential for foreign investment there, Suhail Mohamed Faraj Al Mazrouei, the United Arab Emirates’ minister of energy and industry who also serves as president of OPEC, said that whenever fellow OPEC members cut exports for whatever reason, other member states “stood up to that challenge and compensated” for that loss.

“But when you have tension and terrorism and militias running around and trying to disturb the peace, you will not have the confidence of international investors. That’s something we will not allow to happen,” he said, adding that he’s not convinced investors are willing to pour money into Iran right now, given the political risks. “We have a working model in the UAE, where investors have made good investments and stay for years. This is the difference.”

Al Mazrouei added that even with a surge in US shale oil production, he doesn’t see a crisis among OPEC members as long as prices stay high enough to make future investment in oil and gas infrastructure worthwhile.

“Investment is the key fundamental we are not talking about. The question is, do we have enough investment to ensure we will have enough supply in the future? This is what concerns OPEC,” he explained. “It’s not enough just to produce if your efficiency is low, because you lose money. The level of capital needed for all these projects we’re talking about is in the trillions of dollars in the next four or five years.”

Musabbeh Al Kaabi, CEO of Abu Dhabi-based Mubadala Investment Co., said his company has invested heavily around the world—in a gas field in Malaysia, a refinery in Pakistan, and at an ethylene cracker plant in Texas.

“We are a big believer in downstream and petrochemicals, and we look at petchem as an enabler for a new industrial revolution,” he said. “The expansion in electric vehicles and drones will need light components, and where do you think those components will come from? Petrochemicals, of course.”

Al Kaabi noted that a typical automobile today uses around 150 kilograms of light plastics. But by 2025, that’ll rise to nearly 250 kg of light materials.

“That’s a significant growth for the petrochemical industry,” he said, adding that “oil is also enjoying modest growth, and gas is more aggressive.”

Al Kaabi predicted that by 2040, about 64 percent of all new vehicles sold around the world would be powered by electricity, and that 40 percent of the global fleet of two billion vehicles would be electric vehicles.

“But even with that scenario, the world will still need north of 95 million barrels [per day], and that’ll be driven by economic growth,” he said, adding that as CEO of Mubadala, “my biggest task is to ensure the company remains profitable even at low oil prices. We are ready for any oil pricing scenario because we have done extensive work to ensure that our portfolio is resilient.”

Meanwhile, Iraq—the world’s fourth-largest oil producer, and the second-largest in OPEC after Saudi Arabia—is steadily bouncing back in the wake of its crippling war against Islamic State of Iraq and al-Sham (ISIS) terrorists, said the country’s oil minister, Jabar Al-Luaibi.

“We were fighting a barbaric invasion that took place in 2014,” he said in a subsequent panel discussion that coincided with the launch of the Atlantic Council’s report, “Shaping Iraq’s Oil and Gas Future.”

“ISIS not only occupied one-third of the country but also destroyed almost every aspect of our civilization—buildings, oil infrastructure, schools, universities, museums. Thank God that Iraq stood very firm and strong, that we were able to defeat ISIS and get them out of the country,” he said.

Iraq, which relies on oil for 97 percent of its revenues, has begun rebuilding the oil sector, even though ISIS damaged about 70 percent of the country’s oil infrastructure in the areas it occupied, and set fire to about sixty-five wells. “The industry is moving very fast and the country is now nearing production capacity of five million barrels per day,” Al-Luaibi said.

Majid Jafar, CEO of Crescent Petroleum, said his UAE-based company has invested close to $2.5 billion in Iraq in the last decade—half of it in oil and gas—from Kurdistan in the north to the port of Basra in the south. But he said the country is vastly underexplored.

“Iraq has had a turbulent history, from the Iraq-Iran War which was a drain on revenues and an impediment to investment, to the sanctions of the ’90s and then the wars,” he said. “The Iraqi oil industry became isolated internationally in terms of technology, investment, know-how and exploration.”

Jafar said that only a few thousand wells have been drilled in Iraq’s entire history, compared to ten times that much in nearby Saudi Arabia and well over a million wells in the state of Texas.

“Over 300 oil structures in Iraq’s Western Desert have never even been drilled. Yet even with ISIS, the lack of legislation and issues between the Iraqi central government and the Kurdistan Regional Government as a backdrop, having achieved record production and exports is really quite an achievement,” he said.

Image: “We are a big believer in downstream and petrochemicals, and we look at petchem as an enabler for a new industrial revolution,” Musabbeh Al Kaabi (right), CEO of Abu Dhabi-based Mubadala Investment Co., told John Defterios, emerging markets editor at CNNMoney, at the Atlantic Council’s Global Energy Forum in Abu Dhabi on January 13. (Light House Studio)