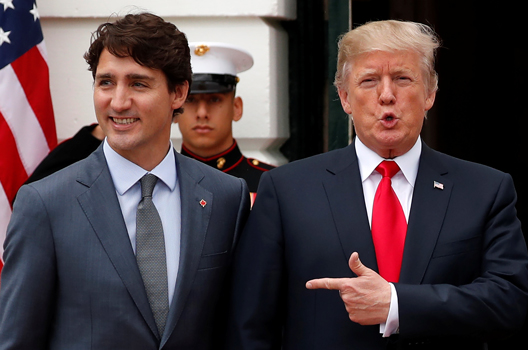 President Trump welcomes Canada's Prime Minister Justin Trudeau on the South Lawn before their meeting about the NAFTA trade agreement at the White House.

As the world awaits the much-anticipated summit between US President Donald J. Trump and North Korean leader Kim Jong-un in Singapore on June 12, the president must first prepare for another important meeting: the G7.

On June 8 and 9, leaders from the world’s seven most-advanced economies will meet in Charlevoix, Quebec, Canada, for the annual G7, or Group of 7, summit. The G7 is made up of the United States, Canada, the United Kingdom, France, Germany, Japan, and Italy, as well as the European Union (EU) as a non-enumerated member. Russia was formerly a member as well, but the forum was reformatted following the exclusion of Russia in 2014 over its annexation of Crimea. This annual meeting of world leaders provides a forum to discuss and establish a consensus on global economic issues such as economic governance, trade, security, environment, and energy.

The G7 summit is hosted and organized each year by the G7 president, a position that rotates annually among member states; this year the task falls to Canadian Prime Minister Justin Trudeau.

As G7 president, Trudeau has set the agenda around five themes: investing in growth that works for everyone; preparing for jobs of the future; working together on climate change, oceans, and clean energy; building a more peaceful and secure world; and advancing gender equality and women’s empowerment. Additionally, the newly formed Gender Equality Advisory Council will ensure that gender equality is central to all aspects of this year’s summit.

In advance of the G7 summit, ministerial-level preparatory meetings allow for representatives to meet and discuss the pertinent economic issues before the G7 leaders convene. The G7 finance ministers and central bank governors met from May 31 to June 2 to discuss a range of global economic issues, focusing on the theme of investing in growth that works for everyone.

In the three-day G7 ministerial meeting, US Treasury Secretary Steven Mnuchin was singled out as his counterparts urged against Trump’s imposition of tariffs on steel and aluminum imports from Canada, Mexico, and the EU. They voiced concerns that these tariffs would undermine rules-based international trade and requested that Mnuchin inform Trump of their concerns. Despite this, the meeting concluded with a consensus that the global economy has strengthened over the past year and that the G7 countries must stand united to address the economic and security issues facing the international community.

Trump justified the tariffs through the use of Section 232 of the Trade Expansion Act of 1962, which provides for tariffs to be placed on a country in the interest of national security. Trump has argued that “the United States has been taken advantage of for many decades on trade” and that tariffs are necessary to protect the steel and aluminum industries, which are vital to US national security. US Commerce Secretary Wilbur Ross defended these tariffs, stating “We take the view that without a strong economy, you cannot have strong national security.”

Trump ultimately seeks to renegotiate the North American Free Trade Agreement (NAFTA) with Canada and Mexico and has stated that the United States “will agree to a fair deal, or there will be no deal at all.”

While the consequences of these actions are uncertain, it is certain that Trump stands alone among his allies heading into the G7 summit, with Bruno Le Maire, France’s finance and economy minister, stating that “it’s been far more a G6 plus one than a G7.”

The G7 summit has historically been a celebration of global economic growth and prosperity among the world’s economic leaders, but this year’s summit faces the challenge of maintaining the integrity and relevance of the G7 itself.

The European G7 members plan to present themselves as a united front on a broad range of issues, including Iran and climate change. Abe, on the other hand, fears that Japan is being excluded from dialogue between the United States and North Korea and will be meeting with Trump in Washington in advance of the G7 summit to discuss North Korea. Despite Trudeau’s planned agenda, the recent diplomatic and economic actions undertaken by Trump will be at the forefront of the discussions and could pose a threat to reaching a consensus.

The tensions surrounding the 2018 G7 summit hold the potential to undermine the G7 itself and the G7 leaders are certainly aware of the gravity of this year’s meeting. Trump, on the other hand, seems unconcerned that his recent actions could derail the discussions. No matter the result, the 2018 G7 summit will be representative of a greater confrontation between competing economic visions and the growing isolation of the United States from its allies.