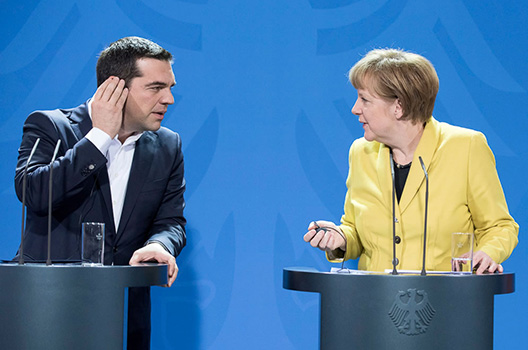 On June 30, Greece defaulted on a €1.5 billion payment to the International Monetary Fund, raising concerns about a Greek exit from the nineteen-member Eurozone. Despite a flurry of new proposals from the Tsipras government, its creditors—the IMF, the European Central Bank (ECB), and the other Eurozone countries—have agreed to delay further talks until after the July 5 referendum, when Greeks will decide whether to accept or reject terms of the latest bailout offer.

The Global Business and Economics Program will be monitoring and analyzing the situation closely, and will regularly update this page.

What Happened in the Referendum, and What Does it Mean?

On July 5, more than 61 percent of Greeks voted in a national referendum to reject the terms of the creditors’ June 26 bailout offer, handing Prime Minister Alexis Tsipras a revitalized—if not impossible—mandate to push for an improved bailout package that both rejects many of the austerity measures that creditors see as necessary and keeps Greece in the Eurozone.

Despite his domestic political backing, Tsipras will likely find it harder to reach a bailout agreement with his country’s European creditors, who overwhelmingly condemned his decision to hold a snap referendum in the first place.

Since the bailout package that Greeks voted on July 5 is no longer on the table—having officially expired last week—negotiations will have to begin on a new proposal, which Tsipras is expected to submit July 9.

When will Capital Controls be Lifted?

In response to the ECB’s July 6 decision to maintain its emergency liquidity assistance (ELA) program at €89 billion, the Greek government extended capital controls and bank closures through July 10. In a press release, the ECB’s Governing Council also noted that it would tighten the terms on Greek collateral pledged against ELA.

Given the massive scale of bank withdrawals across the country—tens of billions of euros have been removed from accounts in the past month alone—Greek authorities have had no choice but to adopt capital controls and close banks nationwide to prevent a full-scale run on the banks.

If the ECB does not raise the ceiling on its liquidity assistance program, Greek banks will likely remain closed well beyond July 10, and ATM withdrawals—now capped at €60 per day per account—may be further rationed.

What is the Status of Negotiations Between Greece and its Creditors?

What is the Referendum About?

On June 28, the Greek Parliament voted 178-120 to hold a July 5 referendum on whether to accept or reject the terms of the latest bailout deal offered by the country’s creditors.

The offer, which makes some concessions to Greece on the value-added tax (VAT) but insists on tough reforms such as pension cuts—is largely in keeping with the status-quo austerity policies Tsipras was elected to repudiate. However, with polls showing that most Greeks prefer to reach an agreement to stay in the Eurozone, Tsipras felt the need to call a referendum in order to reaffirm his political mandate to reject the deal.

The Greek government has since been lobbying its people to vote “no” in the referendum, which it says is the only way for Greece to secure a better deal from its creditors.

What are the Referendum’s Possible Outcomes?

While polls show that just over half of Greeks support accepting the creditors’ terms, Tsipras still has several days before the July 5 vote to galvanize a popular anti-austerity sentiment among a critical mass of Greeks. Here are some possible outcomes on what may happen:

Why Capital Controls, and What Do They Mean?

Following a June 28 meeting of the Greek Financial Stability Council, Greece selected a two-pronged strategy of capital controls and an extended bank holiday—effective June 29—in order to curb the outflow of money from its already-depleted banking system.

The decision was virtually a given after the ECB refused to increase the limit on its Emergency Liquidity Assistance (ELA) to Greek banks—now frozen at €89 billion—in addition to the EC’s refusal to extend its aid program beyond June 30.

Given the massive scale of bank withdrawals across the country—on Saturday alone, Greeks removed around €1 billion from accounts—Greek authorities had no choice but to adopt capital controls and close banks nationwide to prevent a full-scale bank run.

Until July 6—a day after the referendum—ATM withdrawals will be limited to €60 per day per account, and banks will remain closed.