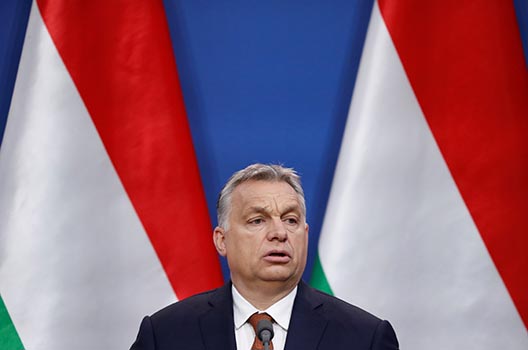 In polls conducted in 2014 and 2018, 60 percent and 80 percent of Hungarians, respectively, said they consider themselves to be citizens of the European Union (EU). Nevertheless, Hungary had less than 30 percent voter turnout in the European parliamentary elections in 2014. In 2019, a year after Hungary’s center-right Fidesz party decisively won the national elections for the third consecutive time, there are two reasons why Hungarians should be more involved in the European elections on May 26: this election will determine the place of Hungary’s parties in the European political spectrum and the outcome will have consequences for Hungary’s municipal elections in the fall.

The Fidesz-Christian Democratic People’s Party (KDNP) coalition currently enjoys the highest support (49 percent to 55 percent) and is projected to win thirteen to fifteen of Hungary’s twenty-one seats in the European Parliament. As for the opposition parties, internal disagreements and a lack of cohesion could depress turnout among their voters.

Some analysts have argued that the opposition parties would be on par with the Fidesz-KDNP coalition had they run jointly. While such an idea was initially entertained, it was derailed by disagreements. As a result, the Hungarian Socialist Party (MSZP)-Dialogue for Hungary (Párbeszéd) (center-left/green) coalition could win two to three seats; Movement for a Better Hungary (Jobbik) could win two seats; and the Democratic Coalition (DK) (social-liberal, center-left) could win one to two seats. The rest of the opposition parties—the newest, centrist Momentum Movement; the satirical Two-Tailed Dog Party; the center-left, green Politics Can Be Different (LMP); and the right-wing Our Homeland Movement (Mi Hazánk Mozgalom), are all unlikely to clear the 5 percent threshold. In this scenario, only Fidesz-KDNP would gain more seats, and members of the Progressive Alliance of Socialists and Democrats (S&D) European parliamentary group—MSZP and DK—could probably maintain their current four seats.

Given the lack of cooperation among the opposition parties, it is questionable whether they can forge a more coherent front for the municipal elections. The traditionally harsher domestic competition could result in further fragmentation of the opposition. Overwhelming support for Fidesz-KDNP in the European elections will likely reaffirm the coalition’s base and produce favorable results in the municipal elections as well. This success would have a lot to do with the issues raised and the messages conveyed by the coalition.

In terms of the European agenda, security and economic prosperity are the two undeniably important questions shaping Europeans’ thinking. As a result, different scenarios have been envisaged for Europe after the European elections.

European leaders believe serious EU reform is necessary and a potential shift of political alliances might be inevitable. On the one hand, the DK—as part of the S&D—has put on its agenda the idea of a more federal “United States of Europe.”

On the other end of the political spectrum, it is essential to closely observe the dynamics between parties in the European People’s Party (EPP), especially following the joint decision to suspend the membership of Fidesz in March, and Fidesz’s subsequent withdrawal of support to EPP Spitzenkandidat Manfred Weber.

Furthermore, it is also crucial to watch how relations between the EPP and the more liberal members develop, additionally, how dynamics within the Europe of Nations and Freedom Group (ENF) and the European Conservatives and Reformists (ECR) evolve. A partial explanation for the latter groups’ relative success and popularity might be that they have issues on their agenda that resonate with the concerns of the general public, and which were also identified as European parliamentary campaign priorities, namely economic growth, unemployment, and immigration. With their support for a Europe built on strong nations as opposed to a federal “United States of Europe”, ideological shifts and the potential rearrangement of the current European party system could have a significant impact on Fidesz’s position within the EU as well.

There has been much speculation about potential new allies Fidesz will try to seek. The recent visits of Austrian Vice-Chancellor Heinz-Christian Strache (from the Freiheitliche Partei Österreichs or FPÖ) and Italian Deputy Prime Minister Matteo Salvini to Hungary have sparked visions of stronger cooperation between center-right and right-wing parties, especially if the EPP shifts toward the left and thus alienates its center-right partners.

While many observers are focused on action at the ends of the political spectrum, there still may be important developments in the middle. Some are suggesting that the Spitzenkandidat system, in which the major European parties announce their candidates for the European Commission presidency before the election, could end as the EU’s chief Brexit negotiator, Michael Barnier, may be an acceptable compromise Commission leader for both the left and the right, despite not being named a candidate by a political grouping. Some have also wondered whether keeping Fidesz in the EPP would be a better strategy to counter the potential formation of a stronger conservative, anti-federalist alliance. A further issue might be the place of Hungary’s traditional allies, such as the other Visegrád Group (V4) countries (i.e. Poland, the Czech Republic, and Slovakia), and whether some ECR members might be more appealing to Fidesz as allies than the ENF group in the European Parliament.

While economic growth, unemployment, and immigration have been critical issues for Fidesz, the party’s emphasis on its Christian-Democratic character and pro-EU stance should make analysts cautious about premature conclusions about the election’s outcome, especially given the prospect for dramatic change within all the major European parliamentary groups.

Anna Juhos is an Atlanticist Fellow with the Atlantic Council’s Future Europe Initiative. Follow her on Twitter @JuhosAnna.