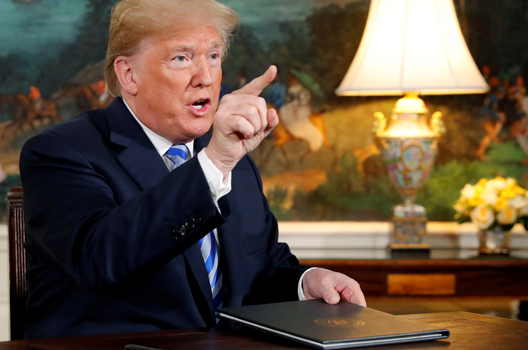 US President Donald J. Trump’s May 8 announcement that he would withdraw from the Iran nuclear deal was broadly consistent with what many observers expected from the administration. However, because the sanctions component proved tougher than most predicted, the full scope of economic and political ramifications remains unknown.

While the United States gears up for the reimposition of broad secondary and narrower primary US sanctions on Iran for its nuclear activity, there will be a wind-down period for ceasing business, allowing for at least some transition time.

This window provides US Secretary of State Mike Pompeo with additional time (ninety days) to seek agreements that address Trump’s key concerns with the deal, namely, the sunset clauses, inspections regime, and lack of application to Iran’s ballistic missile program, support for terrorism, and destabilizing activities in the region.

In his remarks announcing US withdrawal from the deal, Trump announced the wind-down periods that delay the reimposition of economic restrictions on Tehran. As a result of these measures, most immediately, predominantly non-US companies that have dipped a toe into Iranian trade will likely view the wind-down waivers as their cue to wrap up existing business as quickly as possible in order to avoid the wrong end of sanctions once they are fully back in force. In other sanctions contexts, wind-down authorizations do not allow new business, and most foreign companies will recognize this.

Companies that have longer-term investments in Iran may face more difficult choices of how to freeze in place their current investment without triggering US sanctions after the wind down, and without having Iran wipe out those investments. Companies that did not include sanctions exclusion clauses in their initial contracts will struggle to thread that needle.

Perhaps counterintuitively, US companies will also feel pain as a result of the imposition of sanctions. They only have 180 days to come into compliance with the revocation of General License H (GL H), which authorized foreign subsidiaries of US companies to deal with Iran. Such subsidiaries are not generally within the scope of US primary sanctions. This development will force those US companies to reverse a great deal of effort undertaken and resources spent to separate their compliance structures when GL H was put in place just two years ago. More narrowly, US aircraft manufacturers, including Boeing which struck deals worth billions, and importers of Iranian food and carpets (smaller value deals, but perhaps with more companies) will also need to cease operations with Iran, to the extent they are still engaged in such activity.

Moving forward, it will be critical to keep an eye on diplomatic negotiations to see if threatening non-US business with Iran gives any real leverage to the Trump administration, particularly Pompeo, to push for stricter controls on Iran in a revised nuclear agreement. The success, or lack thereof, in any such negotiations will likely spill over into public reactions by foreign governments, especially in Europe, India, and Turkey to increased US sanctions pressure. Japan and South Korea are likely to be more publicly restrained, and China and Russia more hostile, regardless of the situation. More combative stances will likely suggest poor progress and set the stage for significant rifts between the United States and some of its most important partners.

The administration may assess that Israeli Prime Minister Benjamin Netanyahu’s recent revelation of Iran’s pre-2015 nuclear activity would serve as the basis for such an allegation. However, this would seem to be a measure of last resort, as it could have extraordinarily damaging effects on US relationships abroad and on UN sanctions as a tool.

Image: US President Donald Trump speaks to reporters at the White House after signing a proclamation declaring his intention to withdraw the United States from the 2015 nuclear deal with Iran, May 8, 2018. (REUTERS/Jonathan Ernst/File Photo)