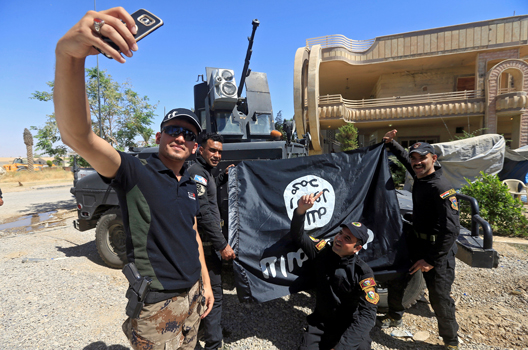 The combined efforts of a host of international and regional state and non-state actors against the Islamic State of Iraq and al-Sham (ISIS) have reduced the so-called caliphate’s control of Mosul to one district and surrounded its fighters in Raqqa, resulting in more of ISIS’ militants fleeing Iraq and Syria and fewer foreign fighters joining it. Despite the fact that ISIS now faces a stark new operational reality with less territory under its control and having suffered major symbolic and tactical losses, it is premature to conclude that the struggle against ISIS is over because many of the factors that contributed to its rise remain.

The extent to which ISIS’ loss of large swathes of territory in Iraq and Syria will damage its ideological influence remains to be seen. On one hand, ISIS’ ability to portray itself as a “winning” and “invincible” force in the Muslim world was a prominent theme of its sophisticated social media campaigns. Today, jihadists around the world must now view ISIS as somewhat less than “invincible.” Yet changes in the US military’s war on ISIS, with US President Donald Trump transferring more authority over such operations to the Pentagon, have increased civilian deaths. This serves ISIS’ political objectives by fueling narratives about Western militaries, much like Syrian President Bashar al-Assad’s regime and its Russian backers, deliberately targeting Sunni Muslim civilians.

Many in the Middle East blame various governments (especially Qatar’s lately) for supporting ISIS. ISIS’ meteoric rise, however, was primarily an outcome of two failed states in the heart of the Middle East—Iraq and Syria—and the marginalization of Sunni communities in Iraq’s al-Anbar province and Syria’s rural areas. If the conditions that provided fertile ground for ISIS to usurp territory in Iraq and Syria in 2014 do not improve for the local population, ISIS’ anti-Western/anti-Shi’ite narratives will likely retain their appeal among Iraqi and Syrian Sunnis who find themselves increasingly vulnerable to the forces fighting ISIS.

The so-called caliphate’s loss of territory in western Iraq and eastern Syria has brought simmering geopolitical tensions to the surface, suggesting that without any political consensus among the state and non-state actors seeking to defeat ISIS the fight to dominate these areas may well bring further instability to the region. With Ankara, Tehran, Moscow, and Washington competing for control and influence over eastern Syria, extremist forces will likely have ample opportunity to establish control over territory being lost by ISIS as the politics of a “Greater Game” dim the prospects for conflict resolution.

Also, a menace that will likely outlive ISIS’ control of Iraqi and Syrian territory stems from the indoctrination of the millions who have lived under the “caliphate” during its three-year occupation. Having subjected, since 2014, the population of entire villages and cities to incessant brutality and propaganda via schools, media platforms, and other institutions aimed at indoctrinating Muslims, ISIS will likely retain substantial ideological influence over many young Iraqi and Syrian Sunnis long after the fall of the “caliphate.”

The social media war is, and will remain, an important component of ISIS’ story. Although many of the terrorists behind recent attacks in the West (which ISIS has often opportunistically taken responsibility for) had no direct links to ISIS, the organization is now likely to become more reliant on its “lone-wolf” recruits to carry out acts of terrorism around the world.

The battle against ISIS has already shifted to the digital arena, where ISIS holds a distinct advantage. The group has for years succeeded in waging an ideological online war against the West. This threat will continue to be difficult to combat regardless of when/if ISIS loses its remaining grip on Mosul and Raqqa and other parts of Iraq and Syria that are currently under its occupation.

Although numerous state and non-state actors can take credit for the military successes against ISIS, the prospects for truly defeating ISIS as a threat to the territorial integrity and security of Iraq and Syria will only improve substantially if engaged actors in both countries’ crises resolve the turbulent underlying political landscape that has provided extremists the opportunity to conquer large swathes of territory in the first place.

As long as Iraq and Syria remain failed states with millions of citizens displaced by years of gruesome violence, the fall of ISIS in Mosul, Raqqa, and other territory claimed by ISIS may only lead to its fighters re-emerging in a different part of Iraq and Syria at a later date, perhaps with a new name and structure. Ultimately, failure to resolve these two countries’ political crises will leave violent extremists with fertile ground to put down roots in the future, especially if the competition to dominate the territory that ISIS occupied for three years exacerbates geopolitical tensions between the rival international and regional coalitions that are fighting the “caliphate.”