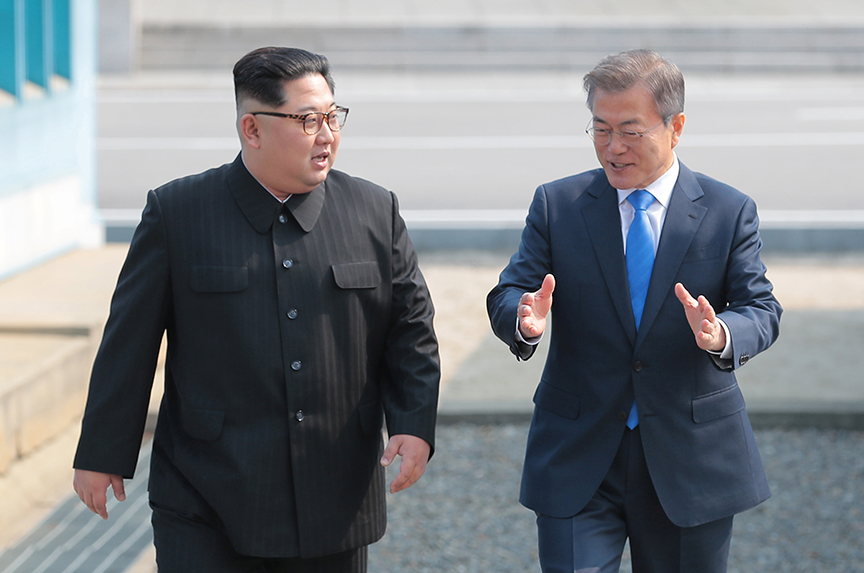 The big question following the historic summit between North Korean leader Kim Jong-un and South Korean President Moon Jae-in on April 27 is what denuclearization means in the context of the summit declaration, according to the Atlantic Council’s Alexander “Sandy” Vershbow.

“In the past, denuclearization of the Korean Peninsula, as distinct from denuclearization of North Korea, has meant the potential withdrawal of the US nuclear umbrella all the way up to the withdrawal of the entire US military presence in South Korea, given that the US is a nuclear power,” said Vershbow, who served as the United States’ ambassador to South Korea from 2005 to 2008.

Kim and Moon pledged in their meeting in the truce village of Panjumom along the border between the two Koreas to denuclearize the Korean Peninsula and work to formally end the Korean War this year.

“There also have been statements [from North Korea] in the past implying that denuclearization needs to be part of a global process of disarmament, leaving North Korea as a nuclear power until that halcyon day arrives,” said Vershbow. “So, there are certainly grounds for skepticism even though the atmospherics of this meeting were remarkably positive.”

Vershbow, who is a distinguished fellow at the Atlantic Council’s Scowcroft Center for Strategy and Security, spoke in an interview with the New Atlanticist. Here are excerpts from our interview.

Q: What are your thoughts on the announcements made at the Kim-Moon summit?

Vershbow: Today’s North-South summit was very dramatic in cementing a long-term reduction in tensions between the two Koreas and laying the basis for a formal peace treaty to end the Korean war after sixty-five years.

As a former ambassador to the Republic of Korea, I could not help but to be moved by the images and warm atmospherics during the summit.

Q: What does denuclearization mean? Does it mean North Korea will end its nuclear program?

There also have been statements [from North Korea] in the past implying that denuclearization needs to be part of a global process of disarmament, leaving North Korea as a nuclear power until that halcyon day arrives! So, there are certainly grounds for skepticism even though the atmospherics of this meeting were remarkably positive.

There could well be a long-term charm offensive [by North Korea] in bilateral relations with the South, but a more difficult stance when it comes to what the United States is interested in, namely denuclearization.

Q: Is there a risk that North Korea could try and drag the United States into nuclear arms reduction talks?

Vershbow: That could be one objective on their part: to insist that, at a minimum, US nuclear forces in the Asia-Pacific region be withdrawn or reduced. I am less worried that they are looking to see the entire US strategic arsenal or the NATO nuclear umbrella brought into play. The bottom line is we don’t know. Past experience argues for being suspicious.

Q: Are you optimistic that conditions have changed sufficiently—through tough sanctions, for example—to force Pyongyang to follow through on its pledge to denuclearize?

Vershbow:  I am more optimistic about the inter-Korean aspect of this. What we know from the leaders’ public comments suggests that the North Koreans are moving toward some kind of peaceful co-existence strategy on the Korean Peninsula. That doesn’t mean that the North has given up on its ambitions to unify the Korean Peninsula under Pyongyang’s rule over the longer term, but they recognize that economically the South is the much stronger player and they are looking to tap into that in terms of investment and economic cooperation, rather than going back to a confrontational stance toward the South. Whether that carries over to the relationship with the United States or the West, however, is far less clear.

Q: How do the Koreas achieve economic cooperation while international sanctions on North Korea remain in place?

Vershbow: North Korea may hope that this new era of good feelings will cause South Korea to soften its stance on maintaining sanctions until there is actual concrete action toward denuclearization. That being said, Moon Jae-in has not said anything that suggests he is getting off the reservation at this point. But Kim may hope that the positive atmosphere created by this summit could weaken the broader international coalition behind the sanctions.

One challenge for the United States going into the US-Korean summit is to stiffen the spine of the Chinese and the South Koreans on the thought of any premature sanctions relief.

Q: What challenge does the PR success of the Kim-Moon summit pose to Trump? Does it raise the risk of a wedge being driven between the United States and South Korea, especially if the Trump-Kim summit fizzles?

Vershbow: There is always a risk of North Korea succeeding in driving a wedge between Washington and Seoul. I am not so worried about that as some of the commentators, however. At the end of the day, the South knows that the United States holds the key to denuclearization and that denuclearization is the prerequisite to long-term peace.

President Trump’s statements today at the press conference with [German Chancellor] Angela Merkel were probably a little more cautious than his early-morning tweets, suggesting he recognizes that he has to work hard to ensure that North Korea doesn’t receive any rewards before it actually earns them.

Q: Have you seen anything come out of the Moon-Kim summit that should cause the United States to change its calculus as it prepares for the Trump-Kim summit?

Vershbow: Nothing was really surprising. The positive atmospherics, the natural relationship that was on display between President Moon and Chairman Kim was moving, knowing what kinds of tragedies have befallen the two Koreas in the years since the armistice. It gives everyone hope that there will be a genuine warming of relations and easing of tensions. But the artful diplomatic wording of the declaration was not a surprise.

Perhaps one encouraging thing was that the documents were signed by Moon as president of the Republic of Korea, which is at least a step toward North Korean recognition of South Korea as a legitimate state. But even that is only a beginning.

Q: In many ways, the Kim-Moon summit has set the stage for the Trump-Kim summit. What approach should the Trump administration be taking to that meeting?

Vershbow: The main thing is to ensure that there is a thorough process of preparations both at the level of Secretary of State [Mike] Pompeo and at the working level so that President Trump goes into the room with Kim Jong-un with some clear expectations of a genuine agreement and not a recipe for failure. That means specifying even more clearly what the United States defines as an acceptable denuclearization package and our preferred timeline so that the North Koreans understand that they can’t evade the issue of denuclearization or drag out the process interminably.

An unprepared summit could end in failure and steer us back toward the path of military confrontation, which, needless to say, should be avoided at all costs.

Q: What is required to get to a peace treaty?

Vershbow: A peace treaty would probably be among four powers given that China and the United States were parties to the armistice. It is up to the parties, especially the two Koreas, whether it is a simple termination of hostilities or whether it includes a broader commitment to reducing armed forces, providing military transparency, establishing normal diplomatic relations between two sovereign states, and possible commitments on economic intercourse between the two Koreas.

Q: Do you see China signing on to a peace treaty while US troops remain in South Korea?

Vershbow: The question of the US troop presence is not legally tied to a peace treaty since the United States has a bilateral mutual defense treaty with South Korea. If the Chinese insist on US withdrawal then this will be a very difficult negotiation. If South Korea is drawn to that as a condition as well, then we will have a serious crisis in US-South Korean relations, not to mention serious concerns on the part of Japan about a shift in the balance of power in favor of China.

Q: Japan has been uneasy about this process. How can it be reassured?

Vershbow: At a minimum, both the United States and South Korea need to continue to consult very closely with Japan and coordinate negotiating positions as much as possible. My understanding is that the United States is looking for full denuclearization to include medium-range delivery systems as well as intercontinental ones. That is a key issue for the Japanese that the threat not be reduced only to the United States while leaving the threat to Japan unchanged.

Japan has longstanding concerns about the abductee issue, so I think the United States will certainly raise that issue based on [Japanese Prime Minister Shinzo] Abe’s request to President Trump during his recent visit.

The bottom line is that there needs to be coordination and a solution that improves everyone’s security in Northeast Asia.

Q: What are some likely deliverables from a Trump-Kim summit? What are the low-hanging fruit?

Vershbow: The low-hanging fruit might be some kind of extension for an indefinite duration of the testing moratorium—both on weapons and on missiles—and some kind of political declaration committing North Korea to denuclearization.

Much more difficult will be beginning to spell out what denuclearization means in concrete terms and what it doesn’t mean, so that there is some confidence that this process is pointing toward the outcome that the United States seeks, even if some details inevitably will be left to follow-on negotiations.

Hopefully, we will get beyond the low-hanging fruit to some positive results on denuclearization. Otherwise, as President Trump has said, the US may declare the North Koreans as non-serious, walk away from the table,  bringing us back to a much more contentious situation.