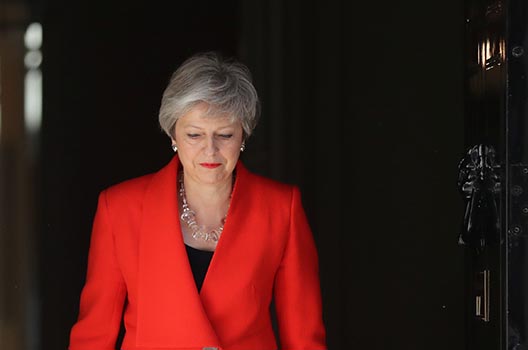 British Prime Minister Theresa May arrives to deliver a statement in London, Britain, May 24, 2019. (REUTERS/Simon Dawson)

British Prime Minister Theresa May has suffered the ultimate political indignity, announcing her own political demise after just three years as prime minister of the world’s fifth-biggest economy.

May announced on May 24 that she will resign her position as leader of Britain’s ruling Conservative Party on June 7, but will stay on as prime minister until a new leader has been chosen, a process that will probably not be completed until late July.

This means that when she greets US President Donald J. Trump for his state visit to Britain from June 3 to 5, she will do so with all the symbols of office, but with virtually none of the power.

It was a premiership that ended in death from a thousand cuts as ministers quit at a record level over May’s failure to deliver a policy she did not believe in: Britain’s exit from the European Union (EU). She was in tears when stood in front of the historic door to her official residence and office at Number 10 Downing Street in London and declared that it had been “the honor of my life” to serve as prime minister.

May is a politician who believes in duty rather than pragmatism. She has no real understanding of the need to compromise and was appallingly bad at campaigning. Her personality and her robotic repetition of worn-out slogans—”strong and stable” being the most prominent—led her to be dubbed by many as the “Maybot.”

Brexit will dominate May’s political obituaries. She became party leader when an unexpected vacancy arose because neither she nor the vast majority of her colleagues ever imagined that her predecessor, David Cameron, would lose the referendum he called in June 2016 on Britain’s continued membership of the EU.

Cameron lost, and quit immediately. And when the dust settled, May, who had campaigned to remain in the EU, was the last candidate standing, the others having quit before a party vote was called. And when she put her own leadership to the country, calling a general election in July 2017, she proved unable to connect with voters.

During the campaign she sought to address the issue of social care for the elderly, proposing that such costs could be paid from the sale of their homes once they had died. It was immediately dubbed a “dementia tax” and when she rowed back on it she was not only taunted by opposition Labour cries that “strong and stable” had turned into “weak and wobbly” but proceeded to make matters worse by repeating her mantra that “nothing has changed.”

It was, perhaps, the biggest single factor that helped her to squander a lead of more than 20 percentage points in the opinion polls when the election was called. After the election she needed to form a minority government, which would be dependent for a routine parliamentary majority on support from ten members of Northern Ireland’s Democratic Unionist Party.

Social care was indeed a truly serious issue, and to this day, there is substantial cross-party support for the view that it requires new forms of funding. But as a result of three years of solid focus on Brexit, little has been done to resolve either this or a host of other problems concerning health, education, defense, and public sector financing that governments would normally hope to address.

Moreover, the fact that her party no longer commanded a majority in the House of Commons made it much easier for rebels in her own party to defy her, knowing they could not be punished. By December 2018, she had lost the support of half the Conservative MPs who did not actually hold government positions.

May has always appeared to be a solitary person, having only a few close advisers, unable to reach out to colleagues in Parliament, or, as many politicians find they can do, to make friends across party lines.

Occasionally, however, she seemed to come alive. There was one day in particular when the Maybot seemed almost human. That was on October 3, 2018, when she addressed the Conservative Party’s annual conference.

When she entered, she shimmied across the stage to the strains of Abba’s “Dancing Queen,” as hip as she was ever going to be. And while there were party traditionalists who thought this inappropriate, she did win over the only person present with a right to judge her performance: the Swedish ambassador.

Then came perhaps the best joke she’s made in her political life, when she referenced the hit TV series The Bodyguard, which involves a former home secretary having a brief sexual fling with her security detail. “I’ve seen the trailers of Bodyguard and, let me tell you, it wasn’t like that in my day,” said May, who was home secretary from 2010 to 2016.

But that joke also revealed her weakness. She’d seen the trailer—but the whole series had already been shown, and there was no indication she had watched it. She simply doesn’t do popular culture. She can deliver a scripted joke or gesture, but she’s not spontaneous.

The joke also proved an unwelcome reminder of her own performance as home secretary, when she initiated a what was officially called a “hostile environment” policy aimed at cracking down on illegal immigration that involved a fleet of vans going around London with giant billboards saying: “In the UK illegally? Go home or face arrest.”

This hardly fitted with the image she had sought to project in 2002 when, on becoming the first woman to chair the Conservative party, she said the party needed to modernize and to shed its image as the “Nasty Party.”  It was while she was party chairman that she first began wearing her trademark kitten-heel, leopard-print shoes.

May certainly has a strong sense of duty and it was this that propelled her to work incredibly hard to secure a deal with the European Commission that would honor the result of the 2016 referendum. But she failed to understand—at least, until it was far too late—that parliamentary arithmetic meant that she would have to secure broad based cross-party support in order to secure a parliamentary majority for such a deal, which would, in turn, require extensive consultations with the opposition parties throughout the actual process of negotiation.

At times, it appeared that May was wedded not just to the Conservative Party but to an image of the party that seemed completely out of tune with modern Britain. Most Sundays would find her at church, commonplace in the United States, but increasingly rare in a steadily secularizing Britain. She seemed rural, not urban, even though she had started her political career as a councilor in South London.

She confides in few and seems uninterested in testing her ideas with either colleagues or critics. Her family life remains a matter of intense privacy and speculation. Her mother, Zaidee, was the daughter of a traveler and suffered from multiple sclerosis for much of her life. Her father, Hubert Brasier, was a Church of England parson.

She is an only child and, to her acknowledged regret, she was unable to have children herself. But she has been ambitious from the start. While studying political geography at Oxford University in the early 1970s she told her friends she wanted to be Britain’s first female prime minister. She was said to have been very annoyed when Margaret Thatcher achieved that goal in 1979.

It was at a dance in Oxford in 1977 that May was introduced to her future husband, Philip, an investment banker, by her good friend Benazir Bhutto, who later became prime minster of Pakistan and then, whilst striving to regain that position, was assassinated in 2007.

Theresa May is clearly devoted to Philip, with whom she loves to go hill walking. She will have plenty of time for that now.