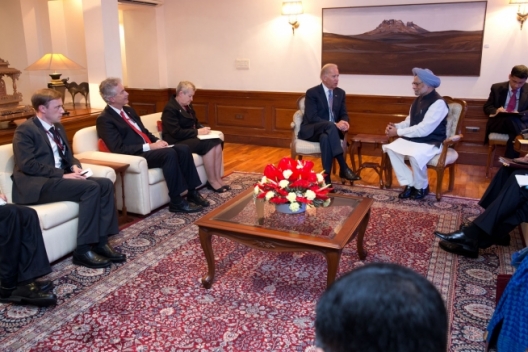 US Vice-President Biden’s recent trip to India appears to have reinforced fears in China of a containment strategy. This notion exaggerates US policy and underestimates India as an independent strategic actor.

There is much to agree with in Fu Xiaogang’s generally perceptive OPED. He correctly assesses unrealistic US expectations of India and India’s economic challenges and shortcomings.

It is accurate to say that some in the US have had deeply unrealistic expectations about India as a counterweight to China. Many US officials failed to grasp that India has been and will continue to view itself as an independent strategic actor, a pre-eminent power in South Asia, steeped in six decades of the non-aligned movement.

Similarly, many in the US have not fully appreciated India’s economic challenges, protectionist policies and bureaucratic maze that constrains trade and foreign investment opportunities – and India’s own growth.

But it is simply wrong and misunderstands cause and effect to suggest that the US is pushing “India to integrate into its system to contain China.” Similarly to argue that, “the US not only encourages India to move East. But also brings up the concept of “Indo-Pacific to justify India’s intervention in Asia-Pacific Affairs.”

Geography alone – its lengthy borders with China and Burma—not to mention its role as a maritime power and its economic interests, make India an important actor in the Indo-Pacific regardless of its ties to the US.

Nonetheless, since the end of the Cold War, the US and India have steadily deepened their bilateral relationship. This is true regardless of either country’s relations with China. At the same time, India’s “Look East” policies have been aimed as much at building bridges and markets with ASEAN and other East Asians as its concerns about China.

The unrealized hopes of the 123 US-India civil nuclear agreement — as no US firms have invested in India’s nuclear industry due to New Delhi’s failure to address liability issues — is a good example of both the overblown US strategic hopes and the stark economic realities constraining US-India relations.

Mr. Fu is correct when he says that India “is afraid of being reduced to a vassal of the US, which will block its path to becoming a great power…”

But that is precisely why viewing India’s behavior as being instigated by the US seriously underestimates India’s strategic calculus and interests.

While India and the US would like to continue deepening their ties, they are very unlikely to be bound by any alliance with the US. Yet it is true that some in the US, since the mid-1990s have had fantasies about India aligning with the US to counter China.

Where I strongly differ is the notion that strengthened US-India ties are necessarily aimed at China, or that India is part of any US anti-China conspiracy. India, like China, acts according to how it sees its own interests.

That China is a close ally of Pakistan (including enabling it to become a nuclear power) is viewed by some in India as containment. Is the China-Pakistan alliance aimed at India or is China just pursuing its interests?

It also depends on how you define alliance. India is not and will not become a treaty ally of the US like Japan, ROK or Australia. But to the degree it sees itself competing in Asia with China, is will work with the US if it judges that would promote its interests.

Some aspects of US-India relations will depend to some extent on China’s behavior. If China claims provinces that are under Indian control, moves troops into disputed areas and builds naval bases in Gwadar, India will view China with suspicion and be more likely to be antagonistic or be a strategic competitor regardless of the US. Yet India is unlikely to compromise its strategic autonomy.

However if things move in that direction, India would tend to view the US as a useful counterweight to China not as an ally to whom it is committed. That is what I mean by counterbalance rather than contain. 21st century international relations are more complicated than that.

Robert A. Manning is a senior fellow of the Brent Scowcroft Center for International Security at the Atlantic Council. This post is adapted from a piece on Global Times.