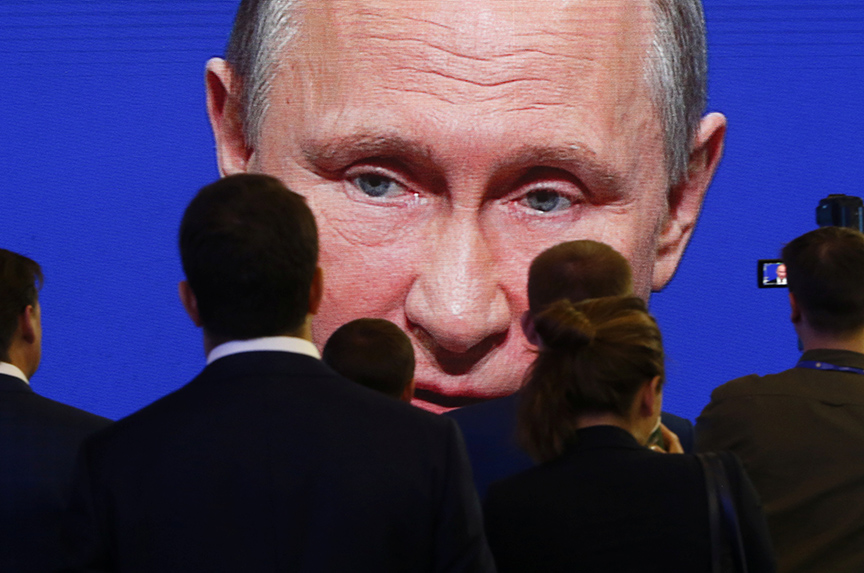 It has become an accepted line of thought that Russian President Vladimir Putin is playing chess on the international stage while the majority of Western leaders play checkers. His high-profile appearances among other world leaders at the G20 summit in Buenos Aires and the centenary of the end of World War I in Paris were noted by some as more evidence Putin had brought Russia back to superpower status. Through land grabs in neighboring Ukraine and Georgia, a major military intervention in Syria, and disinformation campaigns throughout the Western world, the ex-KGB strongman has certainly returned his country to international significance. Recent developments in the Sea of Azov seem to signify another tactical victory with major potential consequences. And yet, have these moves had their intended strategic outcomes? Is Putin really a master strategist taking advantage of hapless European and American leaders?

There is no doubt a dearth of leadership in Europe and the United States, yet Russia’s adventurism has led to some indisputably negative outcomes for Putin’s government. Among them, a seemingly irreversible split with a centuries-old socio-cultural neighbor Ukraine; an increasing set of sanctions targeting Russians and the economy; and, perhaps indirectly, a drop in Putin’s popularity to a level not seen since before Russia’s annexation of Crimea in 2014.

US Special Representative for Ukraine Negotiations Kurt Volker stated in October: “Ukraine today is more unified, more nationalist, more oriented toward Europe and NATO and the West than has even been true before, and that’s a direct result of Russia’s intervention in Ukraine.” There is plenty of evidence to back up Volker’s claim, including a significant increase in Ukrainians’ support for joining NATO, as well as a precipitous decline in public opinion against Russia. Since the beginning of the conflict, the European Union has become Ukraine’s largest trading partner.

On October 11, the Ecumenical Patriarch of Constantinople granted independence to the Ukrainian Orthodox Church, separating it from the Russian Church for the first time since the late 17th century (1686). Though this delicate issue is nuanced, the split is a huge blow to Moscow’s self-perceived role as the center of Orthodox Christianity, as well as to the myth Putin has perpetuated of Russia as a protector of the Russkiy Mir, or Russian World. It represents yet another significant, if symbolic, step for Ukraine in breaking from its northern neighbors’ centuries-long shadow—all the more so as the Russian Orthodox Church has for years been considered a close partner of the Kremlin in spreading the Russian government’s propaganda. Though he may have succeeded in reclaiming the Crimean Peninsula and blocking Ukraine from NATO or EU accession for the foreseeable future, Putin will go down in history as the Russian leader who pushed Ukraine into finally severing its political, cultural, and religious ties with its supposed brother nation.

As Russia watchers are well aware, one of Putin’s main strategic objectives has long been to sow discord and disunity among the nations of the EU and NATO. And yet, according to a Eurobarometer survey in September—with participants from each of the twenty-eight EU countries—66 percent of respondents said they would vote for their country to remain in the EU, while only 17 percent said they would vote to leave. Further, 68 percent of respondents said their country had benefited from EU membership, the highest measured result since 1983.

In terms of relations with Russia, the EU continues to enforce Ukraine-related sanctions, with only Italy flirting with the idea of pushing to end sanctions—likely at least in part to gain leverage with Brussels vis-à-vis other issues. In the aftermath of the poisoning of former Russian spy Sergei Skripal and his daughter, Yulia, in the United Kingdom in March, Western countries showed unity in condemning the extra-territorial assassination attempt. On October 15, the European Council adopted a new sanctions regime targeting those that use and develop chemical weapons with asset freezes and visa bans. Following reports that Russian agents had tried to hack the Organization for the Prohibition of Chemical Weapons (OPCW) in The Hague in April, EU leaders at the European Council meeting in October called for “further strengthening of the EU’s deterrence, resilience and response to hybrid, cyber as well as chemical, biological, radiological and nuclear (CBRN) threats.”

The attempted Skripal assassination and the subsequent OPCW cyber attacks thus led to a strong and unified response, especially by the EU’s standards, and further isolated and even embarrassed the Kremlin. Recent sham elections in eastern Ukraine led to the EU sanctioning nine additional persons in December. Meanwhile, US sanctions related to a host of issues, as well as the specter of new sanctions, continue to loom over Russian companies.

As much as the Kremlin has tried to push the narrative that Western sanctions have been ineffective, the numbers tell a different story. A Bloomberg Economics study estimated that US and EU sanctions have cost Russia 6 percent of its GDP over the past four years. A PwC survey of top Russian executives showed 59 percent said they think Western sanctions have hurt the economy. And according to another poll, 86 percent of large Russian companies working in major economic sectors were “seriously concerned” about a possible expansion of US sanctions in the near future.

Russia’s economic impotence has been compounded by a lack of any effective strategy on Putin’s part. Real incomes continue to decline, while his recent move to sign into law a plan to raise the retirement age sparked deep disapproval and wide protests.

In a survey conducted by a polling agency close to the Kremlin, 45 percent of Russians said they would vote for Putin—down from 67 percent at the beginning of 2018, and among the lowest support the Russian ruler has had over the past decade. In fact, Putin’s most impressive domestic success may be the fact that he has become Russia’s longest-serving ruler since Josef Stalin.

During his annual foreign policy address in October, Putin claimed, “Building up tension and hysteria is not our way… We are not creating problems for anyone.” Leaving aside the sheer absurdity of this statement, the fact is that he has created quite a few problems for himself. Putin has certainly taken advantage of European and US indecision and lack of policy coherence to gain short- to medium-term victories. And he continues to use disinformation and denial to great effect. Yet, for all the issues in the United States and Europe—of which there are plenty, as is normal for any democracy where political pluralism exists—Putin has done nothing to achieve a brighter future for Russia. And as domestic disapproval lingers and even deepens, he will likely try his hand at further foreign interventions, both military and non-military. After all, as he himself recently projected while answering questions about Ukraine: “War helps cover up failures in economic and social policy.”

George Tsereteli is a Europe and Eurasia senior research associate at McLarty Associates.