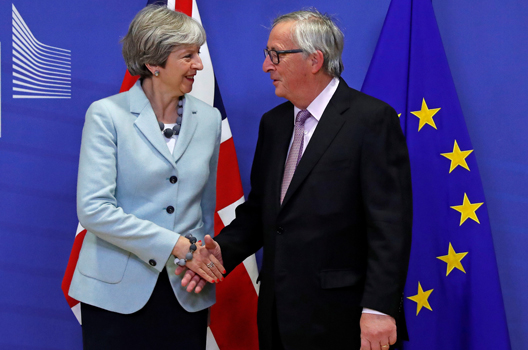 The reaction in the British Parliament to the Brexit deal negotiated by Prime Minister Theresa May and her team—more of  whom resigned in protest last week—has been harsher than 10 Downing Street expected. Brexiteers don’t think it marks enough of a clean break with the European Union (EU) while Remainers think it leaves Britain with the worst of all worlds.

May went back to Brussels on November 21 to try and improve the deal. The European Commission had kept one or two improvements up its sleeve—principally in relation to how the Northern Ireland “backstop” border plan comes to an end should it ever have to be activated—so the British prime minister didn’t have to return home empty-handed.

There are two parts to the deal—the 585-page withdrawal agreement and a far shorter political declaration outlining the  principles on which the UK’s future relationship with the EU will be negotiated over a transition period lasting at least until the end of 2020, and quite possibly longer.

Once finalized, the two texts will go to EU heads of government in a special meeting of the European Council on November 25. There will be scope then for some further amendment. France, in particular, is looking to extract more of a price for agreeing to a transition period. But few expect the Council to reject the package agreed between the EU’s negotiator Michel Barnier and the British government.

The deal then returns to the British Parliament for approval. May will argue that it’s the only alternative to “crashing out” of the  EU with no agreement, which would be immensely disruptive, or even to Brexit not happening at all. But the current signs are that her arguments may not prevail and she will be defeated.

In that case, the prime minister will have to seek yet more improvements from Brussels or dare her opponents to assume responsibility for jeopardizing the country’s future.  The only certainty is that she will not succumb to  Labour Party demands for a general election, which the Conservatives could lose.

The trouble is, rejecting the deal now appeals both to Brexit hardliners who hate the compromises it embodies and to pro-EU Remainers who see rejection as a possible trigger for a “People’s Vote”—a further referendum asking the British people whether they still think it worth going ahead with Brexit. Some Remainers are even warming to the prospect of crashing out happening with such appalling consequences that the country quickly changes its mind and reapplies for EU membership.

Is another referendum likely? No, but it feels less unlikely than it did a few weeks ago when there was a general expectation that, since all the alternatives were so bad, Parliament would have no choice but to approve the deal.

Legally, it can be done because there is nothing to stop the UK withdrawing the application it made to leave under Article 50 of the Treaty of Lisbon, as long as it does so before the two-year deadline for the completion of negotiations expires on March 29, 2019. Even those EU member states that are determined that Brexit should not be pain-free for the UK are likely to be relieved if it changes its mind—Brexit, after all, will be disruptive and costly to everyone.

But it is politically complicated. There would need to be an extension to the Article 50 deadline to allow time for the UK to organize a new referendum, which would take the process beyond the European Parliament elections due in May 2019, raising the question of whether or not British candidates should be accepted.

There would also be a political row in the UK itself. Advocates of Brexit would argue that it was undemocratic not to implement the outcome of the June 2016 referendum. Remainers would argue that a democracy that cannot change its mind when the facts change is not a true democracy.  The facts have changed, as has the demography as older voters who tended to vote Leave have been replaced by younger voters who tend toward Remain.

One of May’s strongest cards is the threat to Brexiteers that if they overbid by rejecting her deal they could lose Brexit altogether.  The betting is still on the prime minister getting her deal through Parliament—eventually. But the odds on Brexit not happening at all are shortening.

Pay no attention, by the way, to the noises about a leadership challenge to May. Hardline Brexiteers in her Tory party say they want her out and are signing letters calling for a leadership contest. But there is no better (or agreed) leader waiting in the wings and all MPs understand that ditching their leader would do nothing to deal with the core issues but just waste valuable negotiating time. Moreover, a failed leadership challenge would mean May was safe for another twelve months, which might not suit many of those wanting her job.