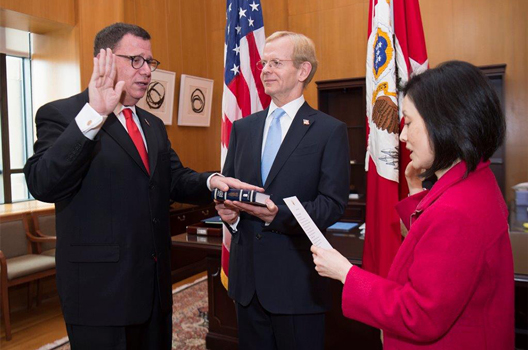 The firing of Steve Goldstein, the suddenly former under secretary of state for public diplomacy and public affairs, will have a three-fold negative impact on the United States’ pursuit of its strategic foreign policy interests overseas, in addition to and distinct from the effects of Secretary of State Rex Tillerson’s firing earlier the same day.

First, Goldstein’s dismissal, immediately after Tillerson’s, further disrupts the US Department of State’s ability to effectively spend a reported $120 million of special funding to combat Russian disinformation that threatens US interests. The primary recipient of this funding, the Department’s Global Engagement Center, is managed by acting civil service and foreign service staff who reported directly to Goldstein. The Center’s highest priority is to establish and implement a workable strategy for its new disinformation mission, on top of an already challenging mission countering violent extremism. This vital effort will now continue to muddle along without the direct attention or sponsorship of any senior Senate-confirmed government official, while Russia and other purveyors of disinformation continue to disrupt democratic societies—including our own. Looking ahead to 2018 midterm elections in the United States, the lack of Goldstein’s leadership only increases the risk of foreign intervention and decreases the United States’ ability to effectively counter such efforts.

Second, Goldstein’s departure will undermine efforts to integrate communications and public engagement into the diplomatic work of the Department. US officials now work within a highly challenging communications environment where foreign policy is made out in the open (on Twitter and television) rather than behind closed doors. In light of this reality, the absence of senior leadership to oversee public diplomacy and mediate spurious policy proclamations further endangers the United States’ ability to wield “soft power” to achieve its foreign policy interests. Goldstein oversaw a vast public diplomacy and public affairs apparatus, ranging from press and digital communications operations to educational, cultural, and exchange programs like the Fulbright program. The unique capabilities of public diplomacy are neither well understood nor effectively deployed without senior leadership to knit them together into strategic campaigns that advance specific foreign policy goals.

Third, the removal of not only Tillerson, but also Goldstein in the same day will further demoralize staff of the Department. Besides Under Secretary for Political Affairs Tom Shannon, who also recently announced his retirement, Goldstein was the only Senate-confirmed leader at the level of under secretary. In his brief time, he had become a recognizable face in the building, due to a number of appearances as Secretary Tillerson’s emcee during town halls and elsewhere. Since the transition to the new administration, the Department’s workforce had become used to the low number of permanent and senior staff. The introduction and rapid removal of a new and well-liked leader within a matter of months will not sit well.

I speak from experience. Before joining the Atlantic Council, I had the opportunity to serve under Goldstein as a senior strategist for public diplomacy in his strategic planning office. With the view of a former insider, my immediate thoughts are with my public diplomacy and public affairs colleagues around the world who had rallied behind Goldstein’s leadership in a time of intense uncertainty in the world and within their own organization, the US Department of State. Goldstein made an immediate positive impression on his workforce. Through in-person meetings and virtual town halls with overseas staff, he brought a personable, accessible, and mission-oriented approach to the role of under secretary. Beyond the personal and professional shock my former colleagues and I feel at the news of his removal from office, Goldstein’s departure leaves major gaps in US capabilities to tell our story to the world and to protect our interests on a global stage.

During his brief tenure at the Department, Goldstein had intentionally (and appropriately) focused on the public affairs portion of his portfolio, which he considered most crucial to turning around a decidedly negative domestic press and public perception of Secretary Tillerson’s performance. Just days before Tillerson’s dismissal, Goldstein took pride in the work he did to improve the secretary’s image, including high-profile appearances hosted by the Atlantic Council, and in a 60 Minutes interview. As I heard Goldstein say after these appearances, “You don’t see any more stories about whether the Secretary is going to leave, do you?”

Sadly, Goldstein’s ability to bolster Tillerson’s image in the press meant that apparent ongoing differences of opinion between Tillerson and the White House simply became less visible to the public—and perhaps also to the two men who suddenly found themselves out of a job.

Graham Lampa is deputy director of communications, digital, at the Atlantic Council. You can follow him on Twitter @grahamlampa.

Image: Steve Goldstein (left) was sworn in as under secretary of state for public diplomacy and public affairs on December 4, 2017. He was fired on March 13. (State Department)