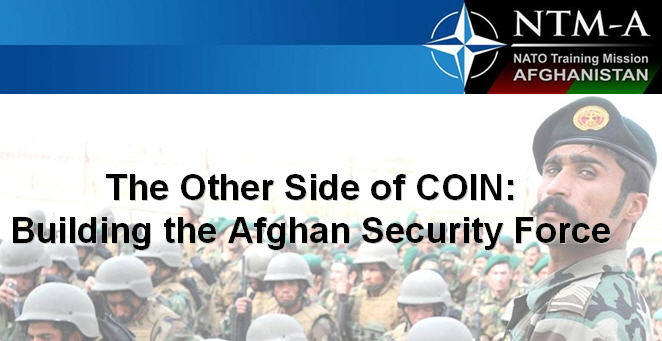 While most of the media attention to NATO’s Afghanistan operation has been on the kinetic operations, the war has no chance of ending successfully unless Afghans can provide their own security.  Largely neglected until two years ago, that "other side of COIN" is showing promise.

Yesterday, the Atlantic Council hosted a delegation from NATO Training Mission – Afghanistan for a private discussion on "The Other Side of COIN: Building the Afghan Security Force." Derek Reveron, a Naval War College professor and regular contributor to New Atlanticist who is spending the year with NTM-A in his capacity as a Navy Reserve commander, led the presentation. His briefing slide is available in PowerPoint format (what else?) here, along with some supplemental materials.

While I remain highly skeptical that enough progress can be made against the Taliban for handover by 2014, I’m more confident than I was yesterday morning that we’re on the right track in training a professional security force in Afghanistan.

One point raised in the Q&A was the sustainability of the relatively costs of fielding such a large police and security force once the Afghans have to pay them themselves. Estimates put salaries alone at $4 billion annually. Considering that the United States alone is spending more than that  ($6.7 billion) each month in Afghanistan, however, that seems a small price to pay for a stable Afghanistan even if the international community has to continue to pay most of it.