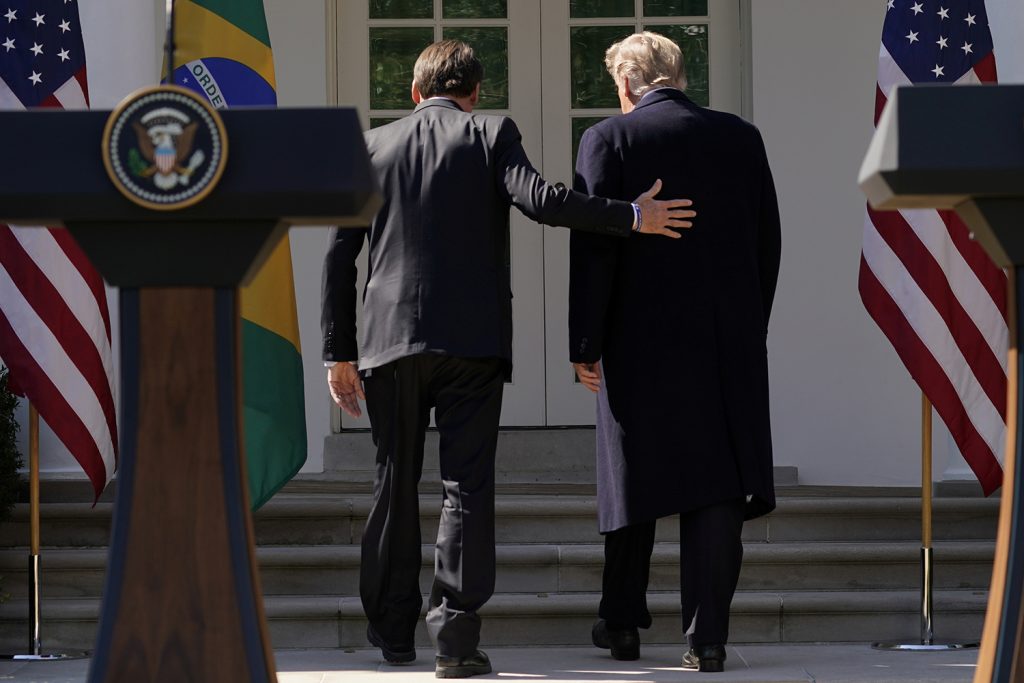 Growing cooperation between the United States and Brazil has created “a very unique moment in our bilateral relations,” as both sides move closer to a potential deepening of their economic relationship, Ambassador of Brazil to the United States Nestor Forster said on March 5.

Joe Semsar, acting under secretary of commerce for international trade at the US Department of Commerce, agreed, saying that it “feels like there is some momentum behind this bilateral relationship,” Semsar suggested that both the United States and Brazil are now focused on continuing to “build the foundations for a potential free trade agreement.”

Semsar and Forster spoke at the Atlantic Council on March 5 to mark the launch of a new Atlantic Council report “US-Brazil trade and FDI: Enhancing the bilateral economic relationship.” The report, authored by Brazilian and US experts, offers a new vision for strengthening US-Brazilian trade and foreign direct investment, with the ultimate goal of a free trade agreement between both countries.

The United States and Brazil would benefit from a closer and stronger trade and foreign-direct-investment-relationship that would amplify growth and prosperity, in both the short and long terms. Deepening the economic relationship would pay dividends in other areas as well, translating into greater opportunities for strategic bilateral cooperation. This paper recognizes that the moment is now and that 2020 is a pivotal year to substantively advance bilateral economic ties.

According to Sergio Segovia, president of Apex-Brasil, the report does not just advocate for pursuing a free trade agreement, but “creates a strategy for a way forward.” Forster agreed, praising the report for suggesting achievable goals for the short term that both countries can utilize “as building blocks towards longer-term objectives.” Semsar argued that the report will help provide leverage as a “focusing document to move [the US-Brazilian relationship] forward.”

The time is ripe for real progress on building economic ties between both countries, as years of hard work have provided a chance for breakthroughs. The US government and their “Brazilian counterparts have worked together for many years to prevent, reduce, and remove barriers to bilateral trade,” Semsar said, adding that “through years of engagement under our bilateral mechanisms, such as the US-Brazil commercial dialogue, we have been able to have productive and meaningful discussions.” According to US Representative Darin LaHood (R-IL), who co-chairs the Brazil Caucus in the US Congress, there has been “growing recognition” in both the United States and Brazil that economic cooperation “can help both countries.”

LaHood also credited the personal relationship between US President Donald J. Trump and President of Brazil Jair Bolsonaro as having “spurred where we are at today.” He further suggested that the successful completion of the United States-Mexico-Canada Agreement (USMCA) “showed our allies around the work that we can negotiate a trade agreement” successfully that is beneficial to all sides.

But while LaHood agreed that a free trade agreement should be a long-term goal for both the United States and Brazil, he cautioned that “there are a number of things that have to be met before we get to this next step.” He stressed the need in Brazil for tax reform, pension reform, and more significant anti-corruption measures as requirements for a serious push toward a free trade agreement. Semsar agreed, stressing that “if this were easy, we would have done it a long time ago.” For the United States, he continued, “details matter. There are fundamental issues that we need to work through before an agreement is possible.”

Forster acknowledged these continued challenges and argued that these make the intermediate steps outlined in the Atlantic Council report more important as an alternative to simply “throwing obstacles on the course” before beginning the race. He also warned against either side becoming too obsessed with potential economic competition between both countries, who often export similar goods. “I think it is about time that we overcome this logic of competition for market access; trying to get a larger slice of each other’s pie,” he said. “I see so much we can do to increase the size of the pie so we all end up with a large slice.”

One intermediary step, Semsar explained, will be to boost US investment into Brazil’s growing infrastructure construction. “US companies are only involved in 2 percent of infrastructure projects in Latin America,” he reported, while Spain accounts for nearly 19 percent and China 7 percent. By working to close this gap and taking other small steps to strengthen the underlying economic relationship, Semsar argued that both sides can “continue to build the foundations for a potential free trade agreement.” LaHood agreed, stressing that both sides should focus on “meeting the goals that we have put in place,” as maintaining progress “internally in Brazil will pay the best dividends down the road.”

“We all agree that we have a tremendous opportunity before us,” Forster said. But he warned that “we cannot keep opportunity for later. This is a unique moment; we should grab the moment.”

The United States and Brazil would benefit from a closer and stronger trade and foreign-direct-investment-relationship that would amplify growth and prosperity, in both the short and long terms. Deepening the economic relationship would pay dividends in other areas as well, translating into greater opportunities for strategic bilateral cooperation. This paper recognizes that the moment is now and that 2020 is a pivotal year to substantively advance bilateral economic ties.

Brazil and Argentina surprised by tariff announcement: What comes next?

In what five key ways can the United States and Brazil work more effectively together to strengthen bilateral trade and foreign direct investment?

Image: Brazil's President Jair Bolsonaro puts his hand on the back of U.S. President Donald Trump as they depart at the conclusion of a joint news conference in the Rose Garden of the White House in Washington, U.S., March 19, 2019. REUTERS/Kevin Lamarque