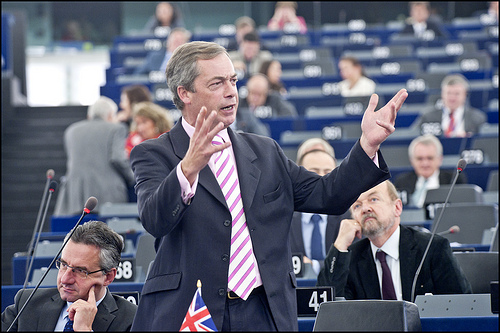 High up in the majestic Yorkshire hills I am but a flat-cap stone’s throw from my native Sheffield.  The sheep stand fast protecting their new-born lambs from the scything, sheeting and predatory rain.  This is a place of unforgiving beauty. It was much the same back in 1381 when Wat Tyler and Jack Straw led the Peasant’s Revolt.  Although the revolt failed disastrously it served as a stark warning to England’s ruling aristocracy that the feudal age must end.  With David Cameron surrounding himself with his Old Etonian chums and Downing Street resembling ever more Monty Python’s Upper Class Twit of the Year sketch (“Vivian Smith-Smythe-Smith has an O-Level in Camel-Hygiene”) last week’s English local elections saw the peasant’s rise again as the United Kingdom Independence Party (UKIP) took an historic 25 percent of the vote.

Speaking with locals in a Yorkshire pub (the Yorkshire National Security Council) the prevailing mood was one of anger.  Anger with an out-of-touch Westminster political elite deemed to have failed them and their country.  ‘Europe’ and immigration have become the twin metaphors for the out-of-touchness of this increasingly despised Westminster political class.  Indeed, immigration and ‘Europe’ are now hopelessly and irrevocably entangled in the English popular mind with both seen as politically toxic. And yet listening to Conservative, Labour, and Liberal Democrat spin doctors it is as though nothing has happened.

The three established parties like to pretend that UKIP’s rise is merely a temporary political phenomenon, a protest driven by economic insecurity.   That is not the message I got.  The EU is now seen by much of England as a hostile force with Brussels the hated metaphor for foreign interference and Westminster its obedient poodle.  There is a profound and widespread sense that EU membership was an historic mistake for England that has generated huge cost for little benefit.  One suggested that the Scots would not be contemplating independence from the UK were it not for the undermining of the British state by Brussels.  Indeed, people see the EU creeping ever further into their lives and object to the false choice on offer from the elite between staying in an undemocratic EU and reforming it (which has over years proved impossible for the British) or leaving and facing more decline.  It is a choice seen as typical of the declinism inherent to the political class.

With limits on immigration from Bulgaria and Romania about to be lifted, the fears of another surge from Eastern Europe is also very real so soon after the post-2004 immigration shock (as it is seen).  It would be easy to say this fear is closet racism and there is no doubt that some of the UKIP vote reflects that but by no means all.  A recent book, The British Dream: Successes and Failure of Post-War Immigration by David Goodhart, grandson of a former master of my Oxford college and fully paid-up member of the liberal London elite, reveals the extent to which that same elite experimented on the English through immigration and their search for diversity —and the damage it has done to the social fabric of the country.

None of my interlocutors I would describe as racist and all were willing to accept a reasonable level of immigration.  However, if my Yorkshire pub is any measure mass immigration is a source of social and cultural friction of such potency that it is changing England in particular in ways to which millions of ordinary English object.  They people I spoke to simply feel like so many English people—used, abused and ignored.

It is not the job of politicians to react to every populist urge. However, Europe and EU immigration both speak to something much deeper: who governs Britain?  London or Brussels?  Equally, whether Britain remains in the EU or not balanced immigration is and will be a key to Britain’s competitiveness in the twenty-first century.  For the record, my pub friends all understood that.

The tortured metaphors and double-speak of political correctness that have hitherto marked the elite narrative on both immigration and Europe must now end.  A sensible debate is urgently needed on both issues.  Indeed, the forthcoming and now unavoidable British referendum on EU membership will by definition pose the most fundamental question of all: do you want to scrap the British state?  For that is what more Europe will really mean and one cannot be part of the EU without accepting more Europe.

The political genie is out of the Westminster bottle and until the Establishment parties face up to the mess they have created UKIP will set the political agenda.

The peasants are indeed revolting…and long may it continue.