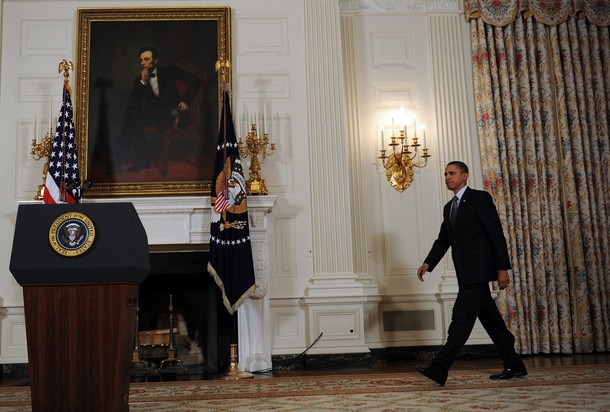 The predictable round of American finger-pointing over the crisis in Egypt has already begun. Senator Dianne Feinstein and others are demanding to know why the CIA did not warn the president that such a crisis was about to happen. Perennial critics of the intelligence community are busy recalling such failures of the past. Once again the vast intelligence apparatus of the United States failed to see the obvious. If the next presidential election turns on the rhetoric of “who lost Egypt?” – as some pundits are already predicting – it is as much CIA’s fault as Barack Obama’s.

There is an easy response to these complaints: knock it off. Of course it’s right to insist that the primary actors in all this with the most at stake are Egyptians and their neighbors, not the US. No matter how important American words and actions may be, the United States is, ultimately, one of many spectators. Awareness of deep popular discontent in Egypt has been widespread for a very long time, both in and out of governments. The likelihood of a major crisis was reported widely in the press during last month’s attacks on Copts. Following the events in Tunisia, nearly every reporter in the Middle East focused reporting on Egypt. It’s therefore inconceivable that the CIA and others in the intelligence community did not contribute their input. Without knowing exactly what the input was, it’s not possible to criticize it. But to some extent, this misses the point.

The intelligence community can warn (or not warn) on a daily basis, but the real preparation for crises such as these occurs in the realm of policy planning, not in intelligence per se. Here may be more grounds for serious criticism. The clumsy reaction of the administration in the early days of the crisis was quickly remedied. But it’s important to ask why it happened. When a guest invited to an NSC meeting did so, this person was shocked by the answer. According to those at the meeting, there were no contingency plans for a collapse of the Mubarak regime.

Can this really be true? There are planning staffs throughout the US government busy writing contingency plans for virtually every part of the world; well staffed scenario gaming centers doing the same; thousands of consultants and advisers and contractors are thinking and writing about politics and strategy, not least in the cottage industry of Middle East studies. Thus it also seems inconceivable that nobody imagined what is now happening to so long standing a regime in the most important country in the Arab world, and planned accordingly.

It so happens that the head of the State Department’s Policy Planning Staff, the Princeton academic Anne-Marie Slaughter, stepped down last week. This had nothing to do with Egypt, of course; her retirement was announced a long time ago. By most accounts (including her own), much of her energies were devoted to the Quadrennial Diplomacy and Development Review, which took the better part of her tenure in the job to produce. It was the release of this report that brought all of America’s ambassadors (save Margaret Scobey in Egypt) to Washington last week to meet en masse with Secretary Clinton.

The report sets forth a worthy agenda for the next generation of American foreign policy making. Such retooling happens periodically and should continue. But it’s hard to imagine that this was in the forefront of the minds of all those ambassadors sitting in the Dean Acheson auditorium.

Plans, President Eisenhower liked to say, are worthless but planning is everything. Every military officer knows this, and it inspired one of them, George Marshall, to establish the State Department’s Policy Planning Staff soon after President Truman named him Secretary of State. Marshall gave the staff clear instructions, which became famous. “Avoid trivia.” What he meant was to focus on the most important, but not necessarily the most urgent, problems, and to stick to a mid-term agenda: three to five years ahead, no more, rarely less.

The Policy Planning Staff has taken on a variety of roles following the needs and wishes of its various heads and the Secretaries for whom they worked. Since the late 1960s, it has housed many of the Secretary’s speechwriters, for example. Its prominence in policy-making has ebbed and flowed. A detailed history of the Policy Planning Staff was commissioned by Richard Haass about a decade ago. The new director, Jake Sullivan, should take the time to read it.

It’s been reported that Sullivan is a more “operational” figure than his predecessor. What this will mean in practice depends as much on his bosses as on himself. In the meantime, he should keep those contingency plans coming, and to make sure that they make their way to the right people inside and outside the Department.

Kenneth Weisbrode is a historian at the European University Institute and author of "The Atlantic Century." Photo credit: Getty Images.