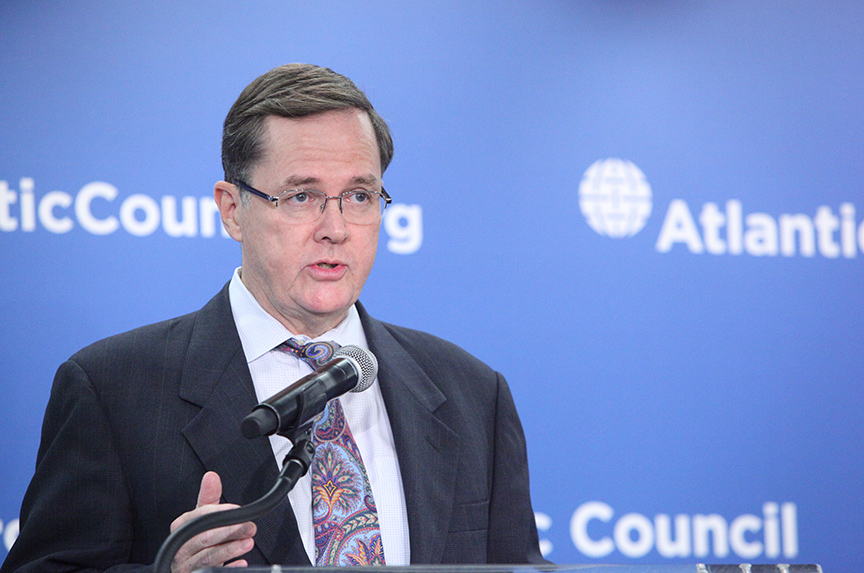 In the prevailing atmosphere of growing nativism and xenophobia, the phenomenon of the strongman is on the rise across the globe, said a senior US official, and this will be the case as long as people believe that the world will continue to be chaotic.

As a result, the challenge of making the case to citizens for the benefits of internationalism, free trade, and open borders will only get more difficult, Thomas Melia, assistant administrator for Europe and Eurasia at the United States Agency for International Development, said at the Atlantic Council on October 13.

“The forces of nativism, of xenophobia, of hysterical illiberalism are not going away anytime soon, regardless of the outcome of a particular election” in the United States or in Europe, he said. “Indeed, as we are seeing, this phenomenon of the appeal of the strongman…is on the rise worldwide.”

Anti-establishment candidates such as Republican presidential nominee Donald Trump in the United States, and far-right political parties and ideologies such as Marine Le Pen’s National Front in France, are on the rise in the West.

Crises—in governance, the economy, and security—have fueled these trends. In Germany, for example, Chancellor Angela Merkel’s welcome to migrants fleeing wars in Syria, Iraq, and Afghanistan resulted in historic setbacks for her political party in state elections.

These developments do not just affect the domestic politics of a country, but the international arena as well, said Melia, noting: “Personalist dictators pursue aggressive foreign policies. They make difficult and unpredictable partners because they have no constraints in their own systems on whims and emotions and appeals to popular emotions.”

“If we think that the world is going to continue to be chaotic and violent and difficult then I think we are going to continue to see an appeal in our politics, here and in Europe, to leaders that try to simplify and explain that the enemy abroad and the enemy within must be vanquished,” said Melia, “and the temptations to short circuit civil liberties and due process and proper democratic debate will only grow.”

Damon Wilson, executive vice president for programs and strategy at the Atlantic Council, introduced Melia. He described a “concerted strategy by Moscow to roll back the gains” made in Central and Eastern Europe over the past quarter century. Noting the crisis in confidence in the West in “what we believe,” he added: “The corollary of that is that if we go wobbly as a core community, the fragmentation begins to happen in the core, it has an outsize impact in the periphery.”

Melia said those who believe in the possibility of an inclusive world order governed by rule of law and liberal values have done a poor job explaining this international global order “so that it would make sense to enough of our compatriots.”

“I think we have gotten lazy at that in our domestic politics and in our explanations of our foreign policy,” he said. “We are seeing some of the consequences of that today, not only in the United States, but in kindred democracies in Central and Eastern Europe.”

Referencing calls for greater US engagement around the world, Melia noted that despite a recent increase in USAID resources for Ukraine and its neighborhood, it is still less than half of what was available to the agency six to eight years ago for a wide range of assistance programs, including supporting democratic voices, in Eastern Europe.

“If we…think that more ought to be done in America’s engagement in this region, then we are going to have to build a broader, deeper consensus that we are willing to put our resources where our policy intentions take us,” he said.

Melia said the next US administration must continue to support democratic processes and good governance while at the same time thinking harder about what the content of those processes ought to be.

“Going forward we need to think…more about what are the implications of tolerating illiberal values, illiberal sentiments, illiberal political movements and forces and leaders, and think about whether there is a way for us to be more clear about the kind of policies and values and principles that we want to see embodied in our partners,” he said.

Image: “The forces of nativism, of xenophobia, of hysterical illiberalism are not going away anytime soon, regardless of the outcome of a particular election” in the United States or in Europe, Thomas Melia, assistant administrator for Europe and Eurasia at the United States Agency for International Development, said at the Atlantic Council on October 13. (Atlantic Council/Victoria Langton)