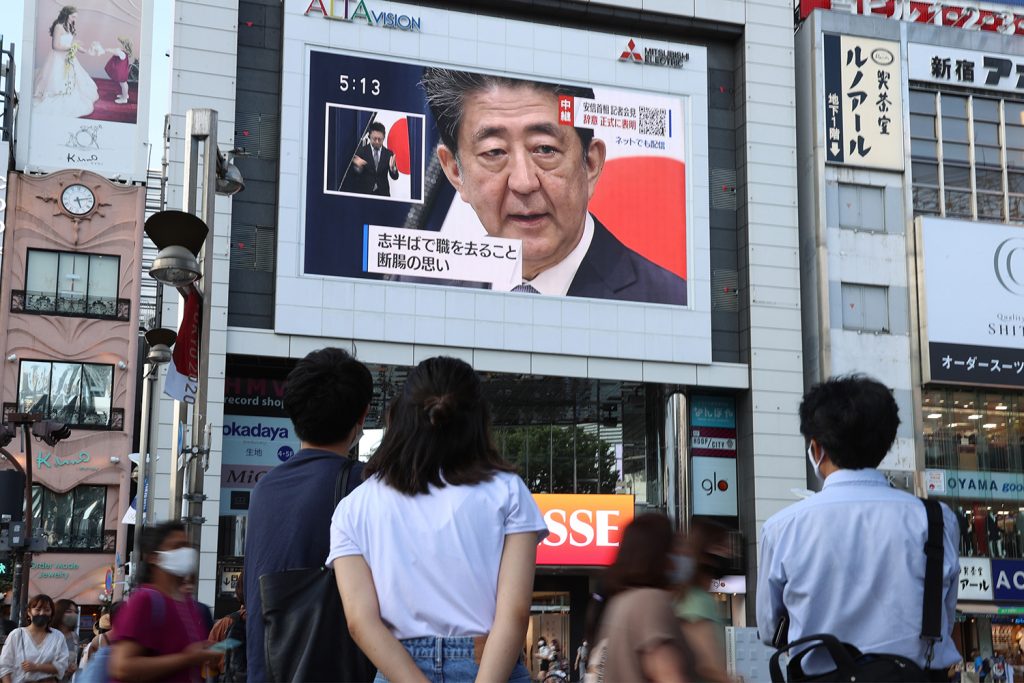 Shinzo Abe will leave as the longest-serving Japanese prime minister in history after a term marked by his efforts to revive the Japanese economy and respond to rising great power competition in East Asia. Abe announced his resignation on August 28 citing challenges from his diagnosis of colitis. Abe has served as prime minister of Japan since 2012, following a previous tenure as prime minister from 2007 to 2008.

A major focus of his premiership was pursuing “Abenomics” which sought to reform the Japanese economy after years of stagnation, by focusing on monetary stimulus, budgetary consolidation, and structural economic and labor reforms. With the breakdown of the Trans-Pacific Partnership (TPP) in 2016, Abe and other Asian partners completed the Comprehensive and Progressive Agreement for Trans-Pacific Partnership (CPTPP), which created the third largest free trade area in the world by gross domestic product. As concerns about shifting geopolitics grew, Abe also put emphasis on strengthening ties with the United States and launched the “Free and Open Indo-Pacific” vision that aims to connect the countries of the Pacific and Indian Oceans by affirming the concepts of freedom of navigation and trade, economic integration, and common security projects.

When Abe received the Atlantic Council’s Global Citizen Award in 2016, he advocated for continued US engagement in the Asia-Pacific, bolstered by a strong US-Japan alliance. The United States “would not find a better, stronger, and more reliable than Japan in pursuit of your continued involvement in the region,” he said.

Atlantic Council experts reflect on Abe’s legacy as prime minister and look ahead to where Japan goes from here:

Miyeon Oh: Transition in Japan and the US could be a game changer for Northeast Asia.

Transition in Japan and the US could be game changer for Northeast Asia.

“The US-Japan alliance will continue to be a top priority for the next Japanese administration’s foreign policy, regardless of who succeeds Prime Minister Abe. However, new Japanese leadership, combined with the outcome of the US presidential election, could be a game changer for geopolitics in Northeast Asia.

“First, deciding how to respond to China’s rise during the prolonged pandemic crisis and post-COVID-19 era will be a key factor that determines the nature of the bilateral relationship going forward. This will depend on whether both countries have new leaders, or if the new Japanese leader is managing the alliance with a second Trump administration. Given the criticisms that Prime Minister Abe’s administration has faced over its handling of the pandemic and the importance of restoring the economy as soon as possible from subsequent market disruptions, his successor might need to review the full range of policies that are critical to Japan’s national interest.

“Second, it is less likely that we will see a dramatic change in terms of improving Japan-Korea relations, as the Liberal Democratic Party (LDP) is likely to use historical issues with Korea, mainly over the Korean Supreme Court’s decision ordering compensation for forced laborers, and the current anti-Korean sentiment as part of its election campaign.

“Third, as Japan played a critical role in securing the Comprehensive and Progressive Agreement for Trans-Pacific Partnership (CPTPP) under Abe’s leadership, how the new prime minister is going to continue Japan’s multilateral engagement will have a significant impact on the changing global economic architecture with accelerated transition to the digital economy caused by the pandemic crisis. Again, the outcome of the US presidential election will likely determine the trajectory in terms of multilateral efforts. His resignation leaves questions for a broad range of other issues, including Japans’ Free and Open Indo-Pacific vision, its North Korea policy, its relations with Russia and Iran, and constitutional revision, among others.”

“In 2012, Shinzo Abe came into office with a plan to revive the Japanese economy. Instead of austerity, Abe pushed fiscal and monetary stimulus to generate growth, reap higher taxes, and get runaway debt under control. The track record of Abenomics is mixed at best. Inflation never reached the target of 2 percent, despite massive quantitative easing from the Bank of Japan (BOJ). In fact, in US Federal Reserve Chair Jerome Powell’s speech at Jackson Hole on inflation on August 27 he implicitly warned that the United States should seek to avoid the economic fate of Japan.

“On the other hand, Abenomics did create growth and avoided the worst case-scenarios for Japanese economy. In the midst of the COVID-19 crisis, many of the world’s leading central banks are now taking their cues from the policies pioneered by the Bank of Japan. The final verdict on Abenomics will be rendered in the years to come as Japan rebuilds and finally grapples with its enormous demographic challenges.”

“Abenomics is best viewed through assessing the implementation of its three arrows. Overall, the record is mixed. One of the arrows, unorthodox monetary policies, was a success and many of the BoJ’s tools, like securities purchases and yield curve controls, have become the new normal. However, the fiscal consolidation arrow has been inconsistent, at times focusing on budgetary consolidation through sales tax hikes, hurting growth prospects. At other times, this arrow has focused on stimulating demand.

“The main disappointment though is about the third arrow, structural reforms. While some reforms have been implemented, for example measures to encourage women’s participation in the labor force (helping to raise their participation rate from below 49 percent to more than 52 percent now), pension reform, and corporate governance and tax reforms, much more needs to be done to make Japan’s economy more dynamic to cope with the profound impacts of the rapid aging of its society.

“All said, Abenomics did help keep the economy at low but positive growth for a long period of time, but inflation remains stubbornly well below targets.”

Don’t expect much change to Japan’s foreign and security policy.

“There are a number of reasons not to expect much change in the general thrust of Japan’s foreign and security policy. First, Japan’s surrounding security environment, the driving factor of its policies in this area, has not changed. Second, Abe’s successor will also come from the ruling Liberal Democratic Party (LDP), and, while differing LDP factions may hold differing views on the details of how to address LDP foreign and security policy priorities, those priorities themselves are largely consistent.

“Third, during his tenure, Abe managed to institutionalize many of his foreign and security policies legislatively and administratively, and that infrastructure will remain. That said, Abe was an active leader in the area of foreign, security, and diplomatic policy for Japan and this drive, along with his ability to institutionalize his efforts, had a significant impact; this is the mutable factor that the leadership transition presents.

“How Abe’s successor prioritizes Abe’s pet issues, such as increasing political/military ties with Europe, constitutional revision, settlement of the Kuril Islands/Northern Territories dispute with Russia, or diplomacy with Iran, and what specific pet issue they bring with them will certainly be worth watching.”

Next PM will need new vision on ballistic missile defense.

“Among a range of defense issues, the next Japanese prime minister will need to define a revised vision for the future of the country’s ballistic missile defense. Although Prime Minister Abe’s vision for a dramatic expansion of existing capabilities will be partially fulfilled in March 2021 with the commissioning of the country’s eighth and final Aegis destroyer, the Maya-class JS Haguro, the recent suspension of plans to construct Aegis Ashore sites in Akita and Yamaguchi prefectures leaves a major gap in the existing plan.

“Whether the next prime minister finds a workable cost and logistics solution for Aegis Ashore or embraces the three alternatives reportedly under evaluation (additional Aegis-equipped ships, land-based radars paired with ship-based interceptors, or an artificial missile defense island), close US-Japan coordination on missile defense will remain essential to regional security under the next government.”

Image: August 28, 2020, Tokyo, Japan - People watch a large screen which displays Prime Minister Shinzo Abe's press conference as he will resign due to his deteriorating health in Tokyo on Friday, August 28, 2020. Abe will remain his post until his successor will be choosen. (Photo by Yoshio via Tsunoda/AFLO).