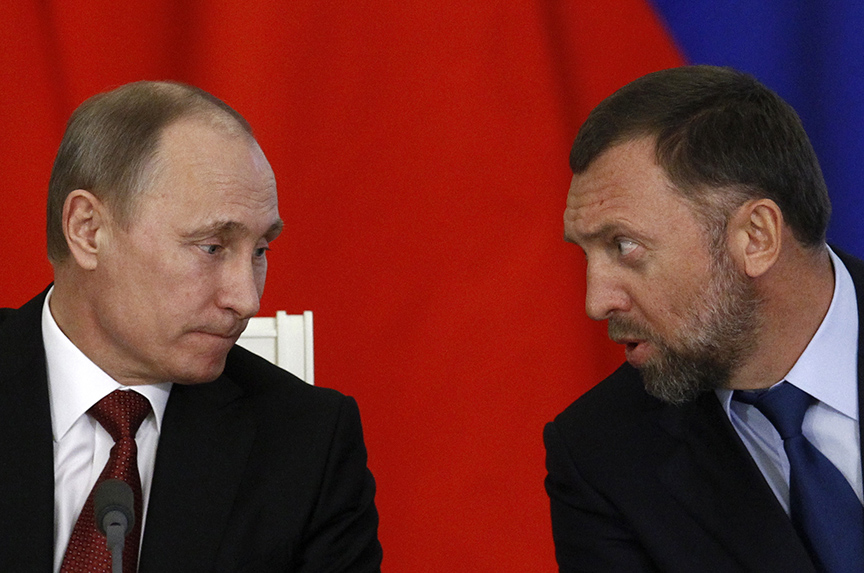 The Trump administration’s long-awaited decision to delist aluminum giant RUSAL finally became public on December 19. The deal that RUSAL’s holding company EN+ has struck with the US Treasury Department’s Office of Foreign Assets Control (OFAC) is sure to draw the ire of those who want to see RUSAL continue under sanctions as a means to punish the Russian economy. The deeper view, however, is that sanctions targeting RUSAL’s founder and now indirect minority shareholder, Oleg Deripaska, worked exactly the way they are supposed to and that Deripaska’s fate should frighten other Russian oligarchs who cooperate with Russian President Vladimir Putin’s misadventures abroad or are part of his corrupt circle. OFAC was also smart to pair the delisting with additional designations to demonstrate a continued stance against the Kremlin’s aggressions.

The sanctions levied last April targeted Deripaska and by extension his ownership interest, EN+ RUSAL and JSC EuroSibEnergo (ESE). The general licenses OFAC issued concurrent with the sanctions, intended to let US businesses wind down their deals with the sanctioned companies, were typical of sanctions actions targeting economically significant actors and typically serve a dual purpose. Not only do the licenses allow US businesses time to untangle their deals, they give the companies owned by the sanctions target an opportunity to excise that ownership interest and get out from under sanctions. Generally speaking, the policy goal of this approach is to minimize the disruption caused by sanctions—in this case, the disruption to global aluminum markets and supply chains (including RUSAL-tied enterprises in Europe) upon which US companies are heavily reliant—while also denying benefit to the sanctions target.

An initial read of the materials Treasury released on December 19 shows that’s what has happened here. EN+, and by extension RUSAL, have fully removed Deripaska’s influence over the day-to-day operations and ownership oversight of RUSAL, and Deripaska is unable to benefit from the transfer of his shares in EN+ or his remaining shares.

Deripaska retains a 45 percent stake in EN+ that grants him certain voting rights, but he is explicitly barred by a deed letter from exercising control over EN+ or its subsidiaries. Effectively, if the terms are as publicized and not otherwise undermined, Deripaska has been ousted from a control of the company that has defined him for the better part of a quarter century, and he won’t see a cent from that ousting. He also won’t see a cent from his remaining holdings in EN+ until OFAC decides to lift the sanctions on him.

Some may quibble with allowing Deripaska to retain any interest, even a substantially impaired one, in these companies. Fully divesting him was never a realistic goal, however, as the only potential option to offload billions of dollars’ worth of shares probably would have been to the Russian state. Any such (heavily discounted) nationalization of RUSAL would have been far more odious than this arrangement. Even the partial stake that VTB will take in this deal will be financial only, as VTB is being forced under the agreement with OFAC to transfer the voting rights to an independent third party. And in a solid move to further quash Kremlin influence over RUSAL, OFAC is also forcing out Matthais Warnig from his chairmanship of RUSAL; Warning has long been seen as a lackey for Putin.

In sum, Deripaska’s is a steep price to pay, and certainly appropriate for the role he may have played in facilitating Russia’s interference in the 2016 US election. It is also not as if EN+, RUSAL, and ESE are fully in the clear, as OFAC demonstratively noted that it retains the right to put sanctions back on if there are any violations of this complicated agreement.

Other Russian oligarchs are certain to take note, especially since Deripaska isn’t the first wealthy Russian to have a company swept out from under him by sanctions. This deal with OFAC is very similar to the deal that Viktor Vekselberg settled for in having his financial ownership stake excised from Sulzer AG, albeit with significantly more transparency and reporting requirements to OFAC, including independent auditors of EN+’s compliance with the delisting deal. One of the theories on how to affect the power dynamics in Putin’s Russia is to try to peel the oligarch class away from Putin himself. That separation is unlikely to be realistic when it comes to those oligarchs who owe their entire fortunes to Putin, like Gennadiy Timchenko, Arkady and Boris Rotenberg, and Putin’s now infamous favorite cellist, Sergey Roldugin, all of whom have significant holdings in Russia and dachas next to Putin’s.

The pre-Putin oligarch class may be a different story, particularly those who maintain extensive holdings in the United States and the European Union. Mikhail Fridman, Alisher Usmanov, Vladimir Potanin, and Yuri Milner, to name a few, are heavily reliant on the US and major international markets to protect their wealth, much like Deripaska and Vekselberg, and they may be thinking twice should the Kremlin call asking for favors. And as clumsy as the public rollout of the “Kremlin Report”—the congressionally-mandated report of the Putin-connected Russian power-and-money structure prepared earlier this year—may have been, its lack of specificity may have wealthy Russians guessing at who’s next if the Trump administration decides to impose more sanctions. The press has covered Fridman’s attempts, in particular, to lobby in Washington against his inclusion on any future sanctions list.

Now that the deal has been announced, Congress has thirty days to review it and potentially issue a joint resolution of disapproval to reverse the action and retain the sanctions, pursuant to Section 216 of the Countering America’s Adversaries Through Sanctions Act of 2017 (CAATSA). While congressional skepticism about some aspects of the Trump administration’s Russia policy is reasonable, as I wrote when the law was passed, the CAATSA review of delistings is problematic for both legal and policy reasons and Congress should defer to OFAC rather than letting delisting decisions become political footballs. Nothing in the announcement on December 19 changes that assessment.

This is a good policy outcome, since the target (Deripaska) has felt significant impact from the sanctions, but disruption to the US and global economies has been minimized. Many may disagree, but as sanctions policy professional, I view the outcome as a win for sanctions as a tool of a policy of pressure on an aggressive Kremlin. Moreover, a denial of this action by Congress is legally risky. If EN+, RUSAL, and ESE can convince a US court that Deripaska no longer “owns or controls” either company, it is possible they could win a lawsuit in US courts challenging any continued sanctions against the companies. A single such loss would undermine the efficacy of US sanctions altogether; OFAC has never lost in court on the merits of a designation and even a single loss would likely lead to additional successful challenges, as has happened in the EU.

On December 5, Sen. Robert Menendez (D-NJ) issued a statement laying out the conditions he believes would be necessary to satisfy before Congress would be willing to consider allowing the delisting of EN+ and RUSAL. Weighing the presentation of facts, the plan announced by OFAC appears to meet Menendez’s goals of removing Deripaska’s influence and preventing him from benefitting from the sale of his shares. I encourage the rest of the Congress to approach the analysis of this action under the review provision in CAATSA with the same mindset, and approve this delisting.