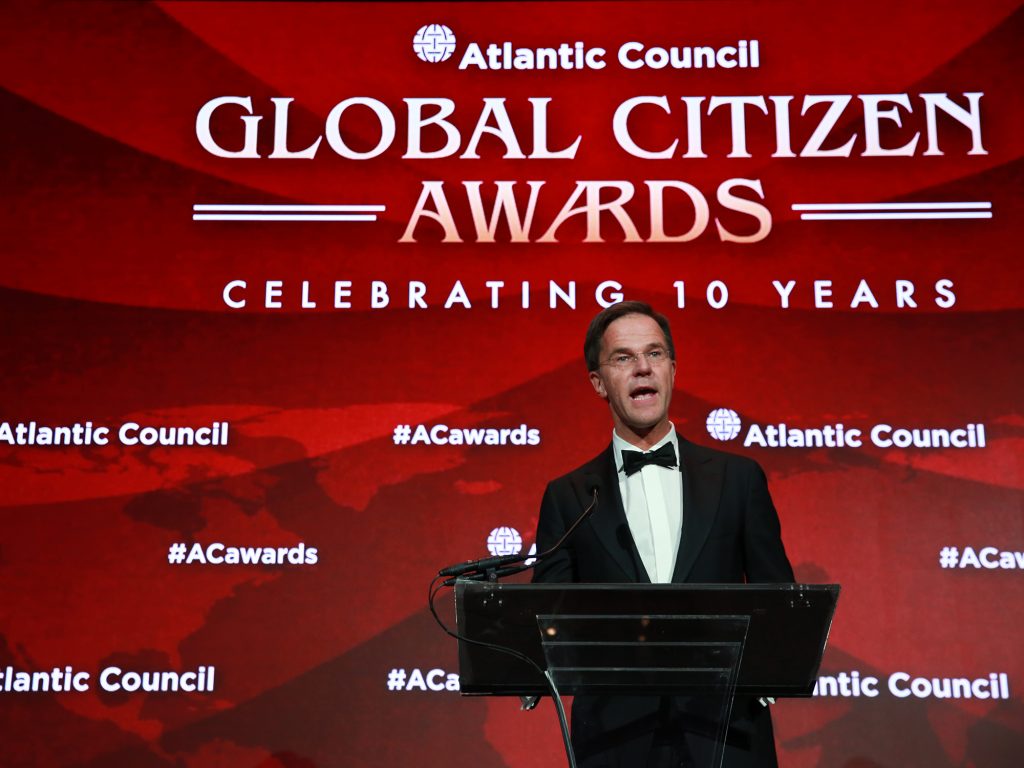 While trade battles and political disagreements continue to fray the relationship between Europe and the United States, “it’s a fundamental truth that transatlantic cooperation makes us stronger than when we’re apart,” Dutch Prime Minister Mark Rutte said on September 23.

The United States and Europe “need each other,” Rutte said upon accepting the Atlantic Council’s Global Citizen Award in New York City on September 23. Relations between European governments and the United States have been stressed in recent years by complaints from Washington over the defense spending levels of European NATO allies, the US withdrawal from the Paris climate agreement and the Iran nuclear deal, and tit-for-tat tariffs on trade between the European Union and the United States.

These temporary disagreements between allies should not distract either side of the Atlantic from the fundamental importance of the relationship and international cooperation, according to Rutte. With growing threats of geopolitical competition from Russia and China, as well as global challenges such as climate change, “it’s in our own [national] interest and in our common interest to keep the transatlantic bond strong and vibrant,” the prime minister maintained.

If we do the right things, the right way, and in the right order together, then suddenly one plus one can add up to three.

While some policy makers on both sides of the Atlantic may argue that Europe or the United States would be better off protecting their own national interests, Rutte countered that international cooperation is often the best solution to tackling the challenges confronting transatlantic societies. “Perhaps the most important lesson I’ve learned in my years as prime minister of one of the world’s most outward-looking trading countries is that national interests are often best served by international cooperation,” he said.

“If we do the right things, the right way, and in the right order together, then suddenly one plus one can add up to three,” Rutte argued.

Reform “without throwing out the baby with the bathwater”

Transatlantic unity will be especially important to “make the post-war multilateral system fit for purpose once again,” argued Rutte. “Today we live in a multipolar and volatile world, a world of shifting coalitions,” he said, meaning that the institutions that have supported the transatlantic relationship—and the international community at-large—will need to respond to these shifts. “Reality has changed, but the underlying system has not evolved to keep up. That’s causing problems and frictions,” he continued, alluding to growing criticisms of the United Nations, NATO, the World Trade Organization, and other multilateral organizations by the United States, China, and other international players.

The need to reform these institutions was the focus of Rutte’s remarks when he visited the Atlantic Council in Washington, DC on July 18. He argued that the United States and others were “right to question whether the [multilateral] system still serves [their] own interests,” but, he continued, rather than moving away from these organizations, leaders should use this criticism “to work together to bring real change in the organizations that really matter.”

Rutte echoed these statements at the Global Citizen Awards, advocating that the transatlantic community strives to make “all the necessary changes and improvements” to make these organizations more effective and equitable, “but without throwing out the baby with the bathwater.”

The Atlantic Council Global Citizen Award has been presented over the last ten years to global policy makers, philanthropists, artists, visionaries, and humanitarians who embody the mission of the Atlantic Council to shape the future together with friends and allies. Rutte was selected as a recipient of the 2019 award in recognition of his promotion of free trade, efforts to combat climate change, and belief in the importance of the transatlantic relationship.

See all of the past Global Citizen Award honorees

In presenting Rutte with the award, Klaus Schwab, the founder and executive chairman of the World Economic Forum and the first-ever Global Citizen Award honoree, described the Dutch prime minister as “a real statesman.” Unlike some politicians who “are driven by a radar system” and respond only to outside events and pressures, Rutte “has clear ethics” and is “someone who follows his values,” Schwab said.

When Rutte heard the news that he was to be honored with the award, he said his thoughts immediately turned to Ingeborg Lariby. The Dutch citizen who was among the nearly three thousand people to die in the 9/11 terrorist attacks on the World Trade Center in New York City. Rutte explained that she “was truly a global citizen, born to Dutch parents, building a life for herself here in New York, with friends all over the world.” Her obituary, Rutte added, described her as “a native of the Netherlands, citizen of everywhere.”

“Wherever we come from, we all gain from an international outlook and an open mind,” Rutte argued. He would accept the award “not as a lifetime achievement award,” but rather “as an incentive prize,” to motivate him to earn the moniker of “global citizen.”

Prime Minister of the Netherlands Mark Rutte speaks to the importance of international partnership.