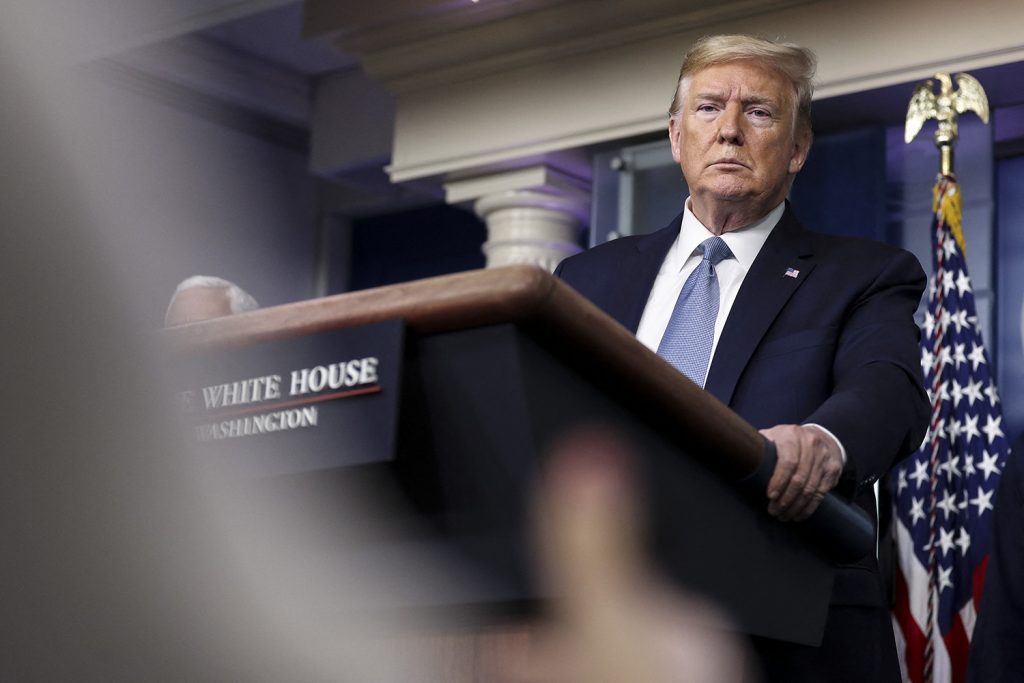 President Donald Trump speaks during a press conference with members of the coronavirus task force in the Brady Press Briefing Room of the White House on March 16, 2020 in Washington, DC. Photo by Oliver Contreras/Pool/ABACAPRESS.COM

Tough times reveal a lot about character, both personal and national; the coronavirus pandemic puts some current American shortcomings in nasty relief, but also, thankfully, points to underlying national strengths.

The problems revealed in the Trump administration’s coronavirus response go deeper than ugly style and operational shakiness (of which there has been plenty). Even worse, US President Donald J. Trump seems committed to two of the United States’ bad ideas: isolationism—the notion that America’s presumed superiority in all things leaves the country in no need of allies, friends, or lessons from abroad—and the smug confidence that the infrastructure of national government can be denigrated, defunded, and used as a political punching bag. Trump and his allies past and present (ideologist and speechwriter Steve Miller and one-time theoretician for the Oval Office Steve Bannon) have invested a lot in these bad ideas but did not invent them. Both have been around American political thinking for generations and, when applied, lead to bad results, of which the bungling around the coronavirus is only the latest example.

American isolationism is more accurately understood as unilateralist nationalism, the United States using its weight to push around pretty much everybody else while trying to avoid responsibility for the consequences. When we last tried that as sustained national policy after World War I, we pulled out of the League of Nations, started a tariff war with our friends just as the Great Depression was biting, and ignored the rise of Hitler and Stalin. In a deadly combination of ignorance and arrogance, we assumed that we could shut out the world when and as we choose. We paid for that error with many lives.

I hear echoes of this strategic failure in Trump’s rhetoric sniping at Europe (such as accusing Europe of responsibility for infecting the United States with the coronavirus) and almost gleeful restrictions of travel from the European Union sprung as a surprise on our best friends. Does Trump imagine that the United States will never need Europe for anything ever again? Will the United States need no help from Europe (or elsewhere) for dealing with the coronavirus? No help in dealing with problems that we know about (climate change) or those that could surprise us in the future? Let’s hope that Trump did not, as senior German officials assert, seek from a German pharmaceutical firm exclusive US rights to a possible coronavirus vaccine; does “America First” mean abandoning human decency and solidarity?

I was working in the National Security Council in September 2001. On September 10, I had no idea that two days later I and my colleagues would be asking our European allies to invoke NATO’s self-defense clause, the famous Article 5 of the North Atlantic Treaty, on America’s behalf. I spent a lot of time in subsequent years asking some of these same governments to help us out with troops in Afghanistan and Iraq. You never know when America’s friends will come in handy. Maybe we shouldn’t be so fast to slap them.

Trump seems to believe that the United States can, in fact, slap around its allies because of our relative power. He talks of America being number one and may believe that being biggest always means being best in all things. But it doesn’t. In dealing with coronavirus, we’re behind, sometimes embarrassingly so (testing kits, for example).

This may have something to do with a second bad idea that the White House seems devoted to: that the federal government can be drained of resources and leadership without consequence. This bad idea has also been around for a long time: on the right, in reaction against Franklin Roosevelt’s New Deal (hatred for social security was as intense in those years as the current disdain for Obamacare). While nobody can draw a straight line between years of disinvestment in federal capacity and the federal government’s weak performance on coronavirus, should we be surprised? (On March 9, the acting director of the White House Office of Management and Budget confirmed that the administration’s 2021 budget request includes a 15% cut to the Centers for Disease Control; you can’t make this stuff up.)

Strong countries must have strong institutions—both in and outside government—if they are to remain so. But Trump’s definition of a strong America seemingly includes a weak government as a deliberate policy objective, e.g., dismantling the “administrative state.” This may sound fine within an ideological echo chamber, but Americans now may be discovering the real-world consequences of a lack of federal government capacity: they’re not pretty.

But there’s also good to note here: in the first half of the 19th century, the French traveler and writer Alexis de Tocqueville observed with astonishment (and respect) that American democracy was characterized by extreme decentralization and restless grass-roots energy. As it turns out, Americans are still that people. At the beginning of March, Americans may have been waiting for presidential leadership on the coronavirus. But after the president’s shaky Oval Office performance on March 11, the country seemed to draw on inner resources to make up for lack of leadership from the top. Schools, companies, states and cities, sports organizations, small businesses, and more made decisions about dealing with the emerging crisis on their own, without instructions, and in the face of misstatements, inconsistencies, and outright lies from the president. The nation turned on a dime, decided that Trump’s initial happy talk was wrong, that he was not on top of things, and that the American people must take action. They did. By the time the president declared a national emergency on March 13, the country had already gone into emergency mode. It wasn’t China, where society froze up until the Leader acted. It was America at its best, true self: acting locally, massively, and fast, with practicality and, by many reports, with compassion.

The coronavirus challenge is getting worse; it will be with us for months at least and its economic fallout may last for longer. But over the past seven days, while the White House sometimes struggled, the best of America showed that it was still there—in business so to speak—doing the needful.