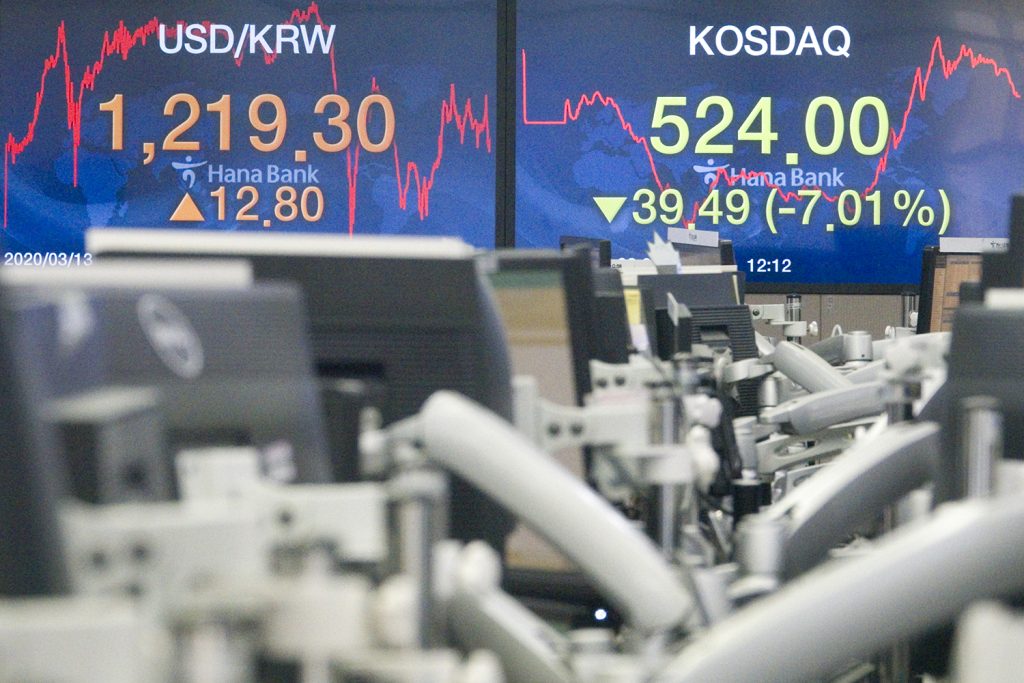 The novel coronavirus pandemic has caused a global economic slump amid huge uncertainty, severely undermining investor confidence. This has prompted sharp and furious selloffs in world financial markets, with volatility jumping to levels last seen during the 2008-09 financial crisis. Equity markets continue to fall even after bouts of central bank easing, including the US Federal Reserve cutting its key rate twice to effectively zero and restarting the quantitative easing program with $700 billion (on top of the $1.5 trillion of liquidity added just a few days earlier).

Adding to the worries is last week’s strange behavior of US Treasury bonds—normally, the assets are in strong demand in times of crises. Throughout the week, their prices fell (yields rose) in illiquid market conditions instead of rising as expected when equities fell. After the surprise March 15 move by the Fed, US Treasuries have resumed their safe haven status—probably until further notice. Unprecedented behavior—like last week’s episode—amid persistent market turmoil, signals further dislocations—especially in vulnerable corners of the financial system. Two areas worth watching are the corporate credit market and the US dollar cross-currency swap funding market.

As background, the sixty percent jump in US Treasury yields in the past week probably reflected liquidation by investment funds and other investors, selling the most liquid securities to meet redemption demands, or margin calls or other needs given large and widespread market losses. The starting imbalances then cascaded through a fragile market structure that is dependent on electronic trading platforms with a very large number of players. This includes high frequency traders conducting an enormous volume of trades in nanosecond timeframes, but with little market depth. At the end of the week, correlation among different assets approached one and liquidity in the most liquid market in the world (i.e. US Treasuries) deteriorated quickly.

These symptoms of market imbalances will likely manifest themselves in the ever-growing corporate credit markets. Since the global financial crisis, corporate debt has increased significantly, reaching $70 trillion (or eighty-eight percent of world gross domestic product). While large international corporations have strong balance sheets, many smaller companies are highly leveraged. A recent Federal Reserve Board study estimates that about one-third of US corporate debt is at risk with companies’ interest coverage ratio below two. At such a low ratio, those borrowers will struggle to pay interests as their profits plummet in the expected coming recession. Furthermore, as credit downgrading proliferates and key funding venues like commercial paper markets dry up—thus, tightening financing conditions—many distressed borrowers will default, adding to the downward economic momentum.

Of special concern are high yield bonds ($1.2 trillion outstanding in the United States) and leverage loans ($1.5 trillion) markets—which have high levels of leverage and little, if any, covenant protection for creditors. These markets have also been significantly impacted by borrowers in sectors that have been battered by the COVID-19 pandemic (travel, airline, hotel etc.) as well as by the collapse in crude oil prices.

It’s also important to monitor the performance of Exchange Traded Funds (ETFs), especially those packaging high-yield (HY) bonds or leveraged loans. Marketed as capable of providing liquidity by being traded on exchanges like normal shares, some HY ETFs have been reportedly trading up to negative nineteen percent below the market values of the underlying securities. Such deep discounts, if they persist, can put pressure to liquidate the underlying securities to meet liquidation orders, reinforcing the selling pressure.

Internationally, many non-US banks and other institutions have likely experienced a shortage of US dollar (USD) funding. This has kept dollar cross-currency swap spreads elevated compared to recent levels. The funding pressure has eased somewhat after repeated Fed injections of liquidity and the announced agreement among the Fed and five other major central banks to enhance dollar liquidity through long-standing swap lines. This can help banks in the five countries, but probably not those in emerging markets without the benefit of such swap lines with the Fed. In any event, persistent pressure on dollar cross-currency swap spreads needs to be monitored. This is because they could trigger a force-selling of some of the trillions of USD assets held by these non-US players, who depend on dollar currency swap markets for short-term funding.