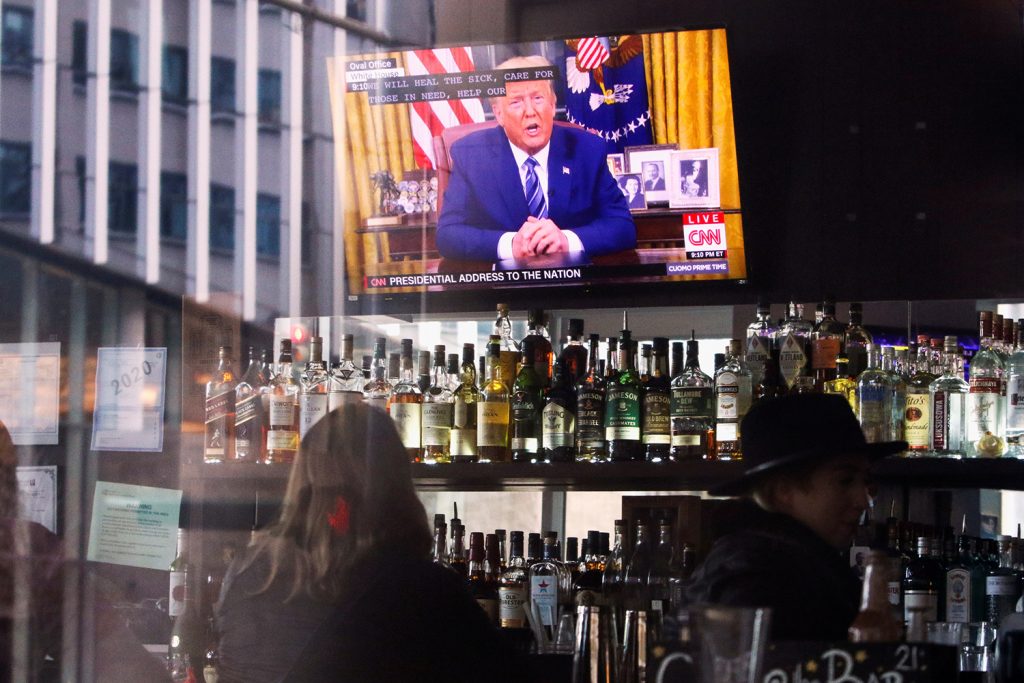 In a prime-time speech to the nation on March 11, US President Donald J. Trump said that the United States will be “suspending all travel from Europe to the United States for the next thirty days.” Trump said the measures were “necessary actions to protect the health and well being of all Americans,” as officials attempt to contain the spread of coronavirus, which the World Health Organization officially declared a pandemic on March 11.

Later clarification from White House officials and an official statement clarified that the ban will apply to the nations of the European Schengen Area, which allows for free cross border movement of people and includes Austria, Belgium, Czech Republic, Denmark, Estonia, Finland, France, Germany, Greece, Hungary, Iceland, Italy, Latvia, Liechtenstein, Lithuania, Luxembourg, Malta, Netherlands, Norway, Poland, Portugal, Slovakia, Slovenia, Spain, Sweden, and Switzerland. Although Trump initially said that the measure “these prohibitions will not only apply to the tremendous amount of trade and cargo, but various other things as we get approval,” but Trump and other officials later clarified that this would only apply to people and not trade of goods. Officials also noted that the ban only applies to foreign nationals and not to American citizens.

In his speech, Trump specifically criticized European officials, claiming that “the European Union failed to take the same precautions and restrict travel from China and other hot spots,” and suggested that “as a result, a large number of new clusters in the United States were seeded by travelers from Europe.” He claimed that the United States has seen “dramatically fewer cases of the virus” than Europe, although EU nations have conducted much more extensive testing for the coronavirus compared to the United States.

In a joint statement, European Commission President Ursula von der Leyen and President of the European Council Charles Michel said that “coronavirus is a global crisis, not limited to any continent and it requires cooperation rather than unilateral action.” They said they disapproved “of the fact that the US decision to impose a travel ban was taken unilaterally and without consultation.”

Atlantic Council experts respond to President Trump’s speech on coronavirus and the impact on the transatlantic alliance:

Frederick Kempe, president and CEO of the Atlantic Council:

“The president’s statement left so many questions unanswered. What does ‘Europe’ include? Switzerland? Poland? Russia? Were our most significant allies consulted? Why not coordinate a common cause with them, managing travel and other response together (if it’s necessary). Why was the UK excluded? What about cargo and trade?”

“What’s the backstory and the follow up? Why did he say nothing about stepping up testing or accelerated efforts at treatment or a vaccine? So much is unclear.”

“This is a time for global democracies to work together and declare common cause, as we’ve done successfully over the past seventy years.”

“America First apparently means blame everyone else. Rather than consulting and mobilizing our allies and global partners to tackle a truly global problem, we’re erecting more walls. We need serious measures to tackle coronavirus but the challenge demands a coordinated response.”

“The golden rule of leading an alliance is consultation—don’t take your friends by surprise, especially when your actions target them. This isn’t about being nice. This is about being smart advancing US interests. What happens the next time we need our allies?”

Thomas P. Bossert, distinguished fellow at the Atlantic Council and former homeland security advisor to the president of the United States:

“There’s little value to European travel restrictions. Poor use of time and energy. Earlier, yes. Now, the travel restrictions/screening are less useful. We have nearly as much disease here in the United States as the countries in Europe. We must focus on layered community mitigation measures—now!”

Barry Pavel, senior vice president, Arnold Kanter chair, and director of the Scowcroft Center for Strategy and Security at the Atlantic Council:

“Instead of taking much-needed measures here, in the United States, where the coronavirus is spreading rapidly, US policy last night focused over there, where US allies who share our values are gearing up to face the same deadly challenge. This is a time where we have to work together, closely coordinated, if we are going to effectively ‘flatten the curve’ of the virus’s spread and reduce the number of virus-related deaths in the United States. US federal, state, and local authorities must take measures immediately to encourage social distancing, accelerate the development and deployment of testing, accelerate preparations for hospitals to handle the looming surge in severe cases, cancel public events, encourage telework, and related actions. Distancing the United States from our closest allies is a wasteful diversion from the main efforts that must now focus on saving as many American lives as possible.”

Christopher Skaluba, director of the Transatlantic Security Initiative in the Atlantic Council’s Scowcroft Center for Strategy and Security:

“NATO’s deterrence strategy is rooted in solidarity of purpose and action between Europe and North America. The Trump presidency has been challenging in this regard as both a matter of rhetoric and policy. Ridiculing Europe’s response to the coronavirus while enacting some sort of transatlantic travel ban is next level stuff, however.

“Instead of tackling this harrowing challenge cooperatively with our closest and most well-resourced allies, the president is intent on keeping distance between the United States and Europe. It’s a stunning choice with consequences for both sides of the Atlantic. If the coronavirus outbreak in the United States proves less severe than in Europe, then maybe the choice pays off politically. The more likely outcome, however, is that missed opportunities for collaboration make the crisis worse for everyone.

“The implications of the coronavirus outbreak for NATO are significant. Allied governments are distracted dealing with a crippling public health crisis. Military exercises are being canceled over fears about the safety of working together in large-scale operations. The commander of US Army forces in Europe is in quarantine. And the president has dealt another blow to transatlantic solidarity with a stunning rebuke of Europe. It’s a dangerous combination that undermines deterrence. And a tempting opportunity for Moscow to challenge the European status quo, much as it did in 2008 and 2014.”

“Tonight’s address from President Trump is exactly what he promised: America first.

“But in this case, it’s America alone. Pandemics, by definition, are worldwide. They don’t respect our neatly defined borders. We know that limiting the spread or ‘flattening the curve’ is an immediate challenge and strict controls curb new cases, but we also know we can’t solve this alone, and the president just shut us off from some of our closest allies, again. It would have been more useful for him to address how we’re working with other countries affected and apply best practices, as opposed to how we will apparently not work with other countries to address this collective challenge. He did not take the opportunity of a nationwide address to first cite the latest information from our top medical experts, address the lag in available testing across states, how emergency funds he requested from Congress will be allocated, or what type of supplemental economic aid is being considered.

“Immediately after his address, senior administration officials began to try to walk back some of what the president said. Markets, institutions, and most importantly people will respond to that confusion accordingly. If you’re wondering what the World Health Organization calls an infodemic is, this is it.”

“In times of crisis, the world needs leadership.  In years past, America could be counted on to play this role.  The president’s message last night should have been about working in solidarity with our democratic allies to confront the coronavirus challenge and galvanize a global response.  It cannot be every nation for itself. We are all in this together and America must lead.”

“The president’s thirty-day ban on foreign nationals from traveling to the United States if they have been in any of the twenty-six European countries belonging to the Schengen area in the previous fourteen days, is unprecedented. While it’s important that the president takes the coronavirus pandemic seriously, his announcement is very troubling on several fronts.

“First, his statement lacks details and creates many uncertainties, including those arising from subsequent administration clarifications. In particular, while goods and cargo from Europe are allowed to enter the United States, people transporting the cargo appear to be included in the ban against foreign nationals—this needs to be clarified quickly. As the United States imports about $500 billion of goods a year from Europe, including machinery and other critical inputs to US companies, any disruption in the timely shipment of such imports will derail US productive activity, pushing the economy toward a recession that nobody wants. Such a ban will also be a blow against the airline industry having been battered by the pandemic, and further destabilize the European economy already on the verge of its recession—which is no good for the United States either.

“Second, it is not clear if international travel ban is the most effective way to arrest the pandemic at this stage, when community spreading of the new coronavirus is the key threat to the United States and other countries. Priority should be given to overcoming the mid-January to late-February lapse when the United States fell behind in the crucial effort to screen and test people to identify those infected on a timely basis: quarantine and treat them, trace their contacts, and repeat the process so as to minimize the risk of unnoticed spreading of the disease. For comparison, the United States has tested more than 5,000 people according to the Centers for Disease Control while South Korea has tested about 200,000, Italy 42,000, and the UK 24,500.

Last but not least, the US action reinforces the tendency of countries scrambling to fend for themselves, which is the opposite of what is needed to fight the pandemic—global threat requires global response. The president tweeted that the virus doesn’t differentiate between Republicans and Democrats—that’s right, it doesn’t care between European and American either.”

Image: US President Donald Trump's televised address to the nation is pictured in the bar at A Pizza Mart, in Seattle, Washington, U.S. March 11, 2020. REUTERS/Jason Redmond