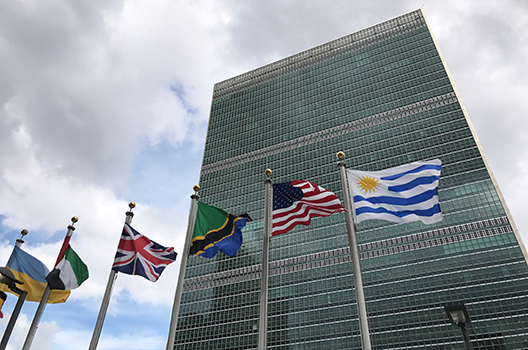 World leaders are descending upon New York this week to attend the 73rd session of the United Nations (UN) General Assembly. The meetings give the world’s top political leaders “a chance from the General Assembly podium to address media and delegations from around the world with what they think is important,” according to James Cunningham, a nonresident senior fellow with the Atlantic Council’s South Asia Center.

With a litany of speeches, meetings, and the high-profile chairing of a UN Security Council (UNSC) meeting by US President Donald J. Trump, what can we expect from the world body this week?

The General Assembly: ‘An Important Opportunity for Messaging’

The 73rd session of the United Nations General Assembly opened on September 18. The general debate will begin on September 25. This debate provides an opportunity for representatives from each of the UN’s 193 member states to address the General Assembly. Most often, these speeches are given by heads of state or government and provide these leaders “an important opportunity for messaging to [other world leaders], to the media, and to their own national publics,” according to Cunningham.

In addition to speakers from world powers such as the United States, Russia, China, and Europe, the general debate will also feature “some very prominent leaders in some very difficult and conflicted parts of the world trying to make their case for what they think is important and what they are trying to do or avoid,” Cunningham said. Perhaps even more important than the speeches themselves is the opportunities presented by having “literally most of the world’s leadership” in New York at the same time, he added.

Throughout the general debate, world leaders meet on the sidelines, “formally or informally,” to discuss pressing issues of international concern. Cunningham highlighted that the general debate often provides the chance for leaders from countries who don’t usually talk to one another “such as the Americans and the Iranians” to interact on the sidelines and have direct or indirect talks.

This week, US Secretary of State Mike Pompeo is expected to have a meeting with North Korea’s foreign minister in New York, while the foreign ministers of Armenia and Azerbaijan will meet with peace negotiating teams about the two countries’ long-standing conflict.

After the general debate ends and world leaders leave New York, the real work of the General Assembly will begin. As Cunningham explains, despite the excitement and visibility of the general debate, “there is no decision-making, no attempt to come to an outcome. It is basically an attempt to outline your views of the agenda and the work the UN is doing.”

Once the general debate is over, “the work of the General Assembly is then broken down into a series of resolutions and work by a number of committees and other entities,” including agreeing upon budgets for UN agencies and “debating of principles and resolutions that outline the view of the international community on a variety of issues,” Cunningham said. UN staff and national delegations will spearhead this work, which will continue for months.

In addition to the publicized general debate speeches, Trump is expected to chair a session of the United Nations Security Council on September 26. The Security Council has fifteen members of which five are permanent (the United States, the United Kingdom, Russia, China, and France) and ten others elected by the General Assembly for two-year terms on an alternating basis (five elected every year). The Security Council is tasked with making high-level decisions on behalf of the UN on security and military issues, including leveling sanctions, authorizing peace-keeping missions, and endorsing international military action.

Cunningham, who was president of the Security Council when he was acting permanent representative at the United Nations, explained that the presidency provides opportunities for the member country “to structure the agenda, convene meetings or not convene meetings, try to shape what the Council actually addresses, and how it addresses it.”

But importantly, Cunningham clarified, the presidency “is not an authoritarian power—he does not get to determine the agenda himself—but he or she has an important role in shaping it and influencing what the Council does and when it does it.” The Security Council president can also leverage the “limited amount of time” the Council meets, using his or her agenda-setting power to “make it harder for some people to address some things—or easier,” Cunningham said.

Trump initially announced that he would be chairing a session on Iran, but that has since been walked back to a more general discussion on nonproliferation of weapons of mass destruction, although there is still a possibility that Trump will heavily focus on Tehran.

According to Cunningham, Security Council sessions are usually highly-scripted meetings as “there are a lot of technical things that the Security Council president does when he is opening and presiding over the meeting.” Trump will be assisted in this by the international staff of the United Nations, which will provide him a script detailing how to run the meeting. Usually the meetings follow a usual pattern, Cunningham said, during which “members would speak in a determined order addressing the subject at hand—there wouldn’t necessarily be a debate as such—and at the prescribed time the president of the United States would provide the view of the United States.”

The question will be whether Trump follows this frame or “whether he engages in a meeting as more of a dialogue and a back and forth with some of the members,” Cunningham said. Such a debate has sometimes happened, Cunningham said, but he believed the meeting this week would “be a fairly straight-forward affair,” with a high possibility that Trump chairs only part of the meeting before turning it over to the US Ambassador to the United Nations Nikki Haley.

But, Cunningham conceded, Trump’s predilections to go off script and “a lot of moving parts” will mean there is “no way to predict” what will happen when he gavels in the Security Council on September 26.