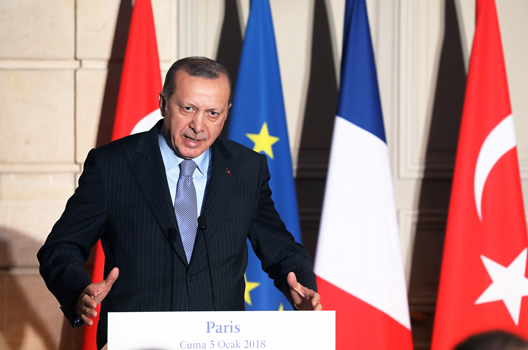 The US military continues to support a Kurdish militia in Syria that Turkey considers a terrorist organization, and Ankara has had enough.

Now, as the Turkish military threatens to advance on Manbij, a town in northeastern Syria held by the US-backed Syrian Democratic Forces that includes the Kurdish People’s Protection Units (YPG), Ankara is “going to try to force a showdown to gain concessions from the United States,” said Aaron Stein, a resident fellow in the Atlantic Council’s Rafik Hariri Center for the Middle East.

However, he added, “I just don’t see a willingness from the United States to give the types of concessions that Turkey wants.”

US Secretary of State Rex Tillerson will arrive in Turkey on February 15 in an attempt to break this impasse.

According to Stein, Tillerson is unlikely to make substantial progress toward solving the “intractable problem” dividing NATO allies Washington and Ankara.

“He’ll give a reaffirmation of the US-Turkish strategic partnership,” and other symbolic overtures, said Stein, but “in terms of hard deliverables, no.”

Tillerson’s trip, though previously scheduled, “takes on a new tone” in light of Turkey’s offensive on the SDF in Afrin, and threats to move on the nearby town of Manbij. US forces remain in Manbij, and the territory is controlled by the US-backed Manbij Military Council (MMC), a group Turkey sees as tantamount to the YPG, furthering their frustrations.

While Stein advocated the United States draw a red line on the issue of Manbij, he said the Turks “do have a point.” Stein described how “there was an original promise made to Turkey that the YPG would not stay in Manbij,” yet they are “indirectly in control” of the MMC.

According to Stein, “this is ultimately the root of the disagreement—the different interpretations of what the YPG actually is.”

“There’s no real mechanism to make this better,” he said.

Though escalatory rhetoric suggests Washington and Ankara are at risk of “breaking” the NATO alliance, Stein said: “NATO is fine.”

Though “there is tension between two members,” heightened by Turkish threats to attack Manbij and put US soldiers in danger, “that’s a step I’m not sure Turkey really wants to take, bluster aside,” he said. “If Turkey risks killing US soldiers it risks its own relations with NATO.”

Aaron Stein joined the New Atlanticist’s Rachel Ansley for an interview. Here are excerpts from our conversation:

Q: Why are Turkey and the United States at loggerheads in Syria?

Stein: It just comes down to US support for the Syrian Democratic Forces, whose primary group is the YPG. It was a decision made in 2015 to partner with a local group to go kill the Islamic State. Now that the war is winding down, Turkey is trying to use its anger to force policy changes.

Turkey doesn’t like the support for the YPG; the United States has chosen to elevate the fight against ISIS above all else, and there you have the roots of this continued disagreement.

Q: What are the prospects of a clash between Turkish and US forces in Manbij? What would be the repercussions of a standoff?

Stein: The Turks continue to say they will move into Manbij, and the US keeps telling everyone they are not going to leave. Ultimately, the Turks are going to try to force a showdown to try and force concessions from the United States. I just don’t see a willingness from the United States to give the types of concessions that Turkey wants. They’re just at an impasse.

Q: What steps can be taken to resolve this impasse?

Stein: That’s what they’re talking about right now. The Tillerson meeting was scheduled but takes on a new importance because of all of the stuff that’s going on with the invasion of Afrin and the threats on Manbij. I can’t imagine Turkish policy makers want to kill Americans even if they are sometimes loose with their language. The consequences would be huge. I would expect the United States to take steps to try and prevent this up until action is taken. Diplomatically, I think it would hurt Ankara a lot more than it would hurt the United States.

Q: What needs to be done to de-escalate and is there a willingness on both sides to adopt the necessary measures?

Stein: My understanding is that there have been some proposals circulating within the US government, but I don’t know what exactly is being said to try and reach a compromise on Manbij and address Turkish security concerns either through some sort of control arrangements around the city or some sort of zone along the Turkish-Syrian border. Those sound fine on paper, but they’re completely infeasible. They won’t work because Manbij is no longer the United States’ to give; it belongs to the Syrian Democratic Forces and the Manbij Military Council. They’re not going to willfully turn the city over to groups they don’t like.

Q: Why has Turkish rhetoric around Manbij escalated to this point?

Stein: They’re trying to force capitulation on the part of the United States. They do have a point. There was an original promise made to Turkey that the YPG would not stay in Manbij. This is ultimately the root of the disagreement—the different interpretations of what the YPG actually is. The United States will say it largely held to its promise because the core YPG fighters that made up the spearhead force when Manbij fell in 2016 left and passed it off to the MMC which is made up of Manbij locals. Therefore, the United States isn’t egregiously in violation of its promise. To which Turkey says the MMC is a subordinate of the SDF which is a cut-out of the YPG which is subservient to the PKK [Kurdistan Workers’ Party], so they’re all the PKK.

This is really what the impasse is about. Personally, I don’t think there’s any way out of this and the only thing the United States can realistically do in the short term is tell Turkey this is an absolutely red line and they will not get Manbij. If Turkey risks killing US soldiers it risks its own relations with NATO.

Q: Are Washington and Ankara at the point of breaking a NATO alliance?

Stein: The tendency is to frame this as the United States is breaking NATO. I don’t think so. NATO is fine. There is tension between two members, but that’s a step I’m not sure Turkey really wants to take, bluster aside.

Stein:  That’s the million-dollar question. Personally, I don’t think you can. This is a choice the US government has made to elevate counterterror interventionism in Syria over bilateral alliance management with Turkey. For now, the US government has made clear that the number one priority is counterterrorism—it is the overriding foreign policy principle of the US government. Counter-ISIS policy is more important in the short term than managing relations with Turkey. That is your problem. There’s no real mechanism to make this better.

Q: What is at stake if the two sides cannot come to an understanding?

Stein: The Turks have said that they will reevaluate the US-Turkey relationship because they are reaching the breaking point. It’s really hard to end a seventy-year alliance. Turkey would be giving up on the United States and it’s ultimately a choice that Ankara would have to make.

Q: Turkey was infuriated by US plans to keep a 30,000-strong protection force in a Kurdish-held area. What is the United States hoping to achieve with this force?

Stein: I think it was largely a bureaucratic mistake to name that thing the Border Security Force. For Turkey, it is a continuation of the status quo that is an open-ended US presence in northern Syria to train people—both Arab and Kurdish—to hold territory that has been taken from ISIS. A lot of that territory is on the Syrian-Turkish border.

Turkey used that as the pretext to turn up the heat. It’s less the Border Security Force as the name and more what that name implies: the open-ended US security presence in that part of Syria and the continued training of these forces.

Q: Is the YPG part of the US-backed MMC, as the Turkish government claims?

Stein: They’re indirectly in control of it. [The MMC] is ostensibly an independent organization made up of people from Manbij. However, everything is controlled from the top-down and they’re all more or less the same entity. That does not mean that the YPG or the MMC operate exactly like the PKK or have the same set of incentives vis-à-vis Turkey, but they are all branches off the same org char.

Q: Do you expect any deliverables from Tillerson’s visit?

Stein: No. I’m sure he’ll reaffirm the necessity of the US-Turkish strategic partnership. They’ll be some strategic links about talks and Turkish security concerns along the border. In terms of hard deliverables, no. In fact, I suspect he’ll even be a little tough on Turkey for its language, its arbitrary arrest of Americans and local staff at US diplomatic facilities, and for Turkey’s talks with Russia at Astana and Sochi.

Q: Could there be any areas for common ground?

Stein: The Turks will have to turn it down around Manbij. [Turkish President Recep Tayyip] Erdoğan threatened US soldiers in Manbij. The presidential spokesperson made a similar threat. It starts at the top in Turkey and they need to tone it down a bit. They’re not going to kill Americans, no matter how upset they are. That could be a starting point for talks about this.

The counter to this is that the United States shows weakness. If they go too far in their concessions to Turkey, they’ll simply pocket it and think the crazy rhetoric is working, and they can turn it up some more. Then, the United States will abandon Manbij because they’ll be afraid of breaking the NATO alliance, so they can’t let that one happen either. This is a really intractable problem.