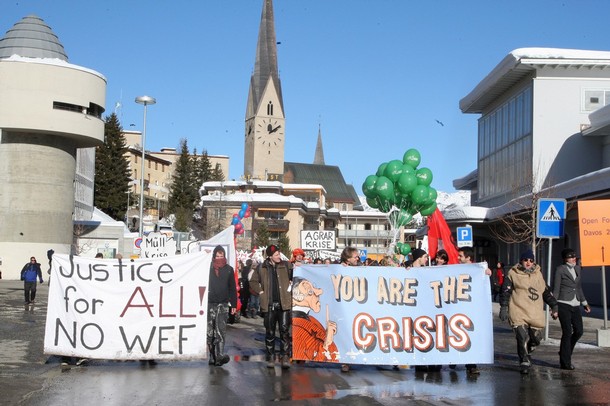 One consistent theme  at the World Economic Forum in Davos was blaming the United States and calling for a new global economic order that doesn’t speak with an American accent.

Chinese Premier Wen Jiabao said, “The current crisis has fully exposed the deficiencies in the international financial system and its governance structures. Developing countries should have greater say and representation in international financial institutions… [there must be] a push for the establishment of a new world economic order that is just equitable sound and stable.”  Russian Prime Minister Vladimir Putin said, “In order to put the world economy back onto a stable growth trajectory, one imperative is correcting the global imbalance that has arisen from overconsumption in the United States and insufficient internal demand in other countries.”

Without President Barack Obama in Davos to counter these accusations or lead discussion in Davos, some are wistfully declaring the end of the American era.

But they are wrong.

In a 2004 Foreign Policy essay, Walter Russell Mead coined the concept of "sticky power," arguing that U.S. economic policies and institutions attract other countries to the U.S. system and then trap them in it.  Alan Binder, an economist at Princeton and former vice chairman of the Federal Reserve, quoted in the Wall Street Journal noted the general perception of the United States has changed, but “not the view of the dollar.” In spite of record deficits and a nearly 11 trillion dollar debt, foreign capital still flocks to the United States. Even with Treasury bills near zero percent, foreign governments and foreign banks still buy. The United States is expected to issue $2 trillion in debt this year.

The dollar is not simply the national currency of the United States, it is a global currency. Governments hold trillions of dollars in reserve. Commodities like oil are priced in dollars. And several countries, including China, pegs its currency to the dollar. The dollar is sticky.

Just as the dollar isn’t going away, neither is the International Monetary Fund. It was less than two years ago that Venezuela’s President Hugo Chavez called for a new global lending system. Riding high on record oil profits, Chavez said, “We will no longer have to go to Washington, nor to the IMF, nor to the World Bank, not to anyone.”

Yet, the IMF has never been more relevant. Since fall, the IMF has loaned $50 billion to Hungary, Ukraine, Iceland, Pakistan, and Hungary. Japan provided an additional $100 billion to the IMF, which should find its way to Belarus, Serbia, Turkey, and El Salvador. As countries like Russia spend their rainy day funds, it may not be far behind El Salvador asking for a loan to refinance $600 billion in bonds this year. The real danger of this, notes Ulrich Volz, is that this “has given way to a withdrawal of funds from all corners of the developing world.” Consequently, there will be little international capital to assist countries reaching the millennium development goals for countries that are attempting to end poverty and decrease infant mortality. Japan has recognized this problem and announced in Davos its plan to spend at least $17 billion on Asian development.

While it is easy to blame Wall Street or American-dominated institutions for the recession, it is unlikely that American capitalism will morph to Euro-capitalism. China, Russia, or India is unlikely to create a new international financial system. And no country can economically de-link itself from the United States. Far from ushering in a new economic order, the global recession has illustrated how sticky the United States. It remains to be seen whether the Obama administration also understands how essential the world is to a US economic recovery.

Derek Reveron is a professor of national security affairs at the U.S. Naval War College in Newport, RI. These views are his own. Photo by AFP/Getty Images.