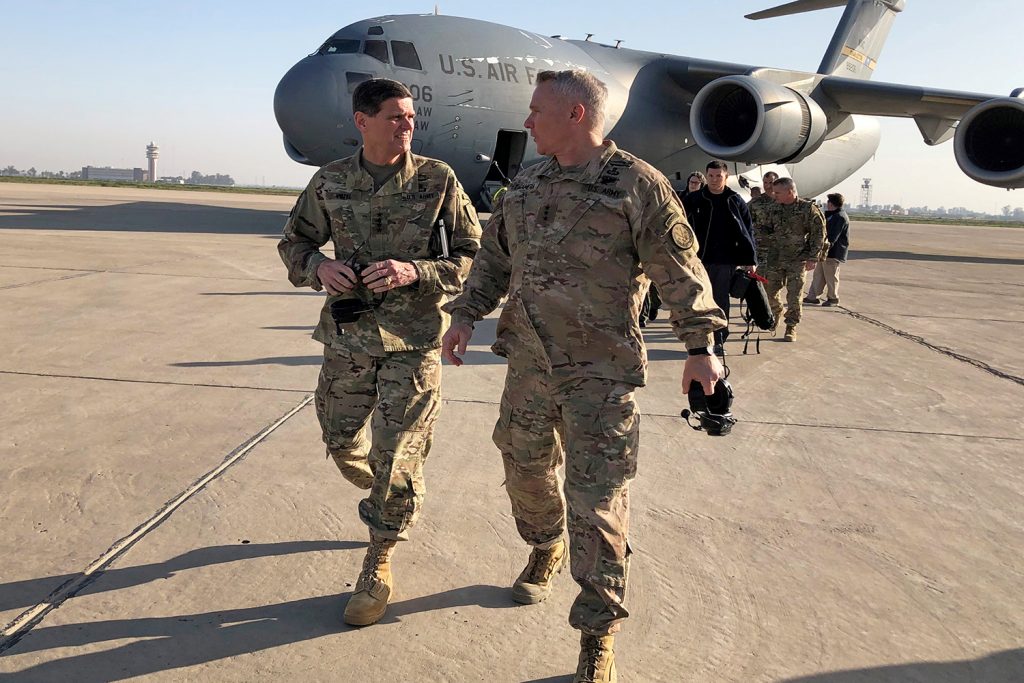 The United States must continue to build its systems of alliances and partnerships across the Middle East in order to ensure stability and to combat the growing influence of outside powers in the region, former commander of US Central Command General Joseph Votel said on October 8.

With festering conflicts in Libya, Yemen, Syria, and Afghanistan, continued instability in Iraq and the Persian Gulf, and growing fatigue among the US public for military involvement in the region, partners and allies will be vital to protecting US interests in the years to come, Votel argued at an Atlantic Council event on the future of US Middle East policy. “Strong partnership can act as a mitigator in the areas where we choose to accept risk and where we also retain important national security interests,” Votel, who served as commander of United States Central Command from 2016 until March 2019, said. “In essence, having a longer list of partners, allies, and friends than our adversaries and competitors is always better.”

While the former general maintained that the United States has focused on building more partnerships across the region, he warned that recent US policy decisions could put these relationships in jeopardy. On October 7, the White House said that the United States would be moving some US troops away from the northeastern Syrian areas controlled by Syrian Defense Forces (SDF)—a militia made up of Kurdish and Arab fighters that have fought the Islamic State of Iraq and al-Sham (ISIS) with assistance from the United States—and would not oppose Turkish military action to remove SDF forces from areas near the Turkey-Syria border. Votel said that he reacted to the change of policy with “disappointment that we are letting down our partners, perhaps adding to the humanitarian disaster in this region, and that we may be ceding a hard-won strategic advantage.”

Turkey has alleged that the Kurdish elements of the SDF—specifically the People’s Protection Unites (YPG)—are allied with the Kurdistan Workers’ Party (PKK) terrorist organization. Votel said that during his time at US Central Command, he considered the SDF “a capable and trustworthy partner” that “did everything we asked them to do, even when it was not something they necessarily wanted.”

Votel further warned that the implications of the US shift could be much wider than Syria. At a time when Washington should be cultivating more cooperation with like-minded partners, the change in policy, Votel argued, “will make it more difficult to build partnership in the future.”

These partnerships will be vital to future US strategy in the Middle East, Votel continued, as Washington looks to protect its interests while dealing with existing tensions and the rising influence of new players. David Schenker, assistant secretary in the US Department of State’s Bureau of Near Eastern Affairs agreed, saying that the United States “seek[s] to tackle the region’s problems by working together with partners, advancing their interests while we advance our own.”

Schenker warned, however, that the entrance of Russia and China into the region as major powers threatens not only to damage US interests but will also weaken those who partner with them. Rather than helping partners build their own capacities, Beijing and Moscow “exploit openings to increase their own influence at the expense of their partners,” according to Schenker. He pointed out that “Saudi Arabia is China’s leading oil supplier,” but Beijing has offered no support to Riyadh to protect its shipping against attacks from Iranian forces. Similarly, Russia has taken no tangible steps to help the region end any of its long-standing violent conflicts, preferring instead to play “spoiler to advance its own interests,” including sponsoring the regime of Bashar al-Assad in Syria and sending private military forces into Libya.

The particularly destabilizing influence of Russia in the Middle East is the focus of a new report by the Italian Institute for International Political Studies (ISPI) and the Atlantic Council’s Rafik Hariri Center for the Middle East called The MENA Region: A Great Power Competition. The report, edited by Atlantic Council resident senior fellow Karim Mezran and ISPI senior research fellow Arturo Varvelli, warns that perceived withdrawal by the United States from the Middle East, militarily and politically, leaves a vacuum which China and Russia are eager to fill. Moscow in particular has already shown a willingness to become directly involved in hot and cold conflicts, sometimes allying themselves with both sides in order to play them off against each other.

Armando Varricchio, the ambassador of Italy to the United States, said the entrance of Russia and China into the region made it even more important for the United States and its allies to remain engaged. “What happens in the Mediterranean and the MENA region does not stay there,” he argued, adding that
“there cannot be a withdrawal from the Middle East. This is the key to our collective security.”

A new strategy for a changed region

The alternative to withdrawal, Votel argued, is re-engagement with the United States’ long list of allies and partners in the region. The United States should strive to maintain its position as a “preferred partner” throughout the Middle East, he explained. “Being the preferred partner will allow us the opportunity to preserve our important interests while at the same time shifting focus to address vital national interests.”

The first steps to achieve this, Votel continued, must be to help find political resolution to the conflicts in Afghanistan, Syria, Libya, and Yemen, which he described as the “sucking chest wounds of the region.” The ongoing wars not only drain US treasure and manpower from protecting other interests, but also provide Russia and other potential adversaries openings through which to expand their influence.

The United States should also reinvest directly in the programs and projects that deepen ties with partners in the region, Votel said. Security cooperation offices should be expanded to deepen military-to-military ties, he argued, although these should be “conditional on military professionalism and sustained self-reliance.” Washington should also focus on trying to build more sustainable “coalition task forces,” like the US-led maritime security coalition to help protect shipping in the Persian Gulf, to shift more of the security burden onto its Middle Eastern partners and help develop their capabilities. US forces could also devote more resources to the International Military Education and Training program and conduct more security exercises to build interoperability and shared strategic culture with partners.

All of these measures would help to deepen the network of friends the United States has in the region and help build resilience to potential destabilizing conflicts and malign influence from other adversaries, Votel argued. The overall goal of the United States in these efforts, according to Votel, would be to preserve “an overall favorable balance of power in the region, when compared against other great power competitors or would be regional hegemons.”

Doing so will require the United States to avoid the temptation to withdraw from the region as a whole, but rather to “have better balance,” with significant economic, diplomatic, and commercial engagement to rebuild trust and deepen connections across the region, Votel said. By taking more concerted action to meaningfully engage the region, he concluded, the United States and its allies can help transform the region and provide a much brighter future.

Can the United States and China cooperate in the Middle East?