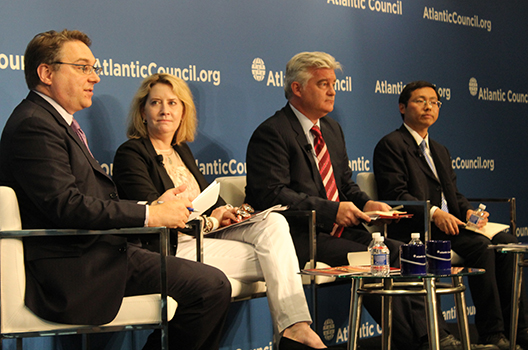 Jonathan Fulton, an assistant professor at Zayed University in Abu Dhabi, explained that China has slowly expanded its activity in the Middle East, deepening economic investments and setting up “strategic partnerships” with several countries. Fulton’s new Atlantic Council report China’s Changing Role in the Middle East details Beijing’s efforts to create a “dense presence across the region.” Fulton explained at an Atlantic Council event on June 6 that China’s efforts aren’t “a very haphazard approach by any stretch. It is not just based on energy or oil, there [are] a lot of moving parts to this.”

China’s increased activity has certainly caught attention in Washington, but Victoria Coates, the senior director for the Middle East in the US National Security Council, downplayed the threat this presence poses for the United States. Coates argued that many critics of the Trump administration worried that the United States’ withdrawal from the 2015 Iran nuclear deal—the Joint Comprehensive Plan of Action (JCPOA)—would leave an opening for China to fill the United States’ regional role. In fact, she argued, the United States has remained close to its regional partners and has been particularly effective in limiting Iran’s ability to export oil, including to Beijing, which has significantly dropped its imports from Tehran. “A range of nations, including China, now see Iran as a bad bet,” Coates said.

Coates also downplayed a June 5 CNN report that US intelligence officials believe Saudi Arabia has been purchasing Chinese technology and infrastructure to expand its ballistic missile program. Coates conceded that reports of an arms buildup in the Middle East are “always a source of significant concern,” but she refrained from criticizing Riyadh for the purchases. “The truly escalatory activity has been on the part of Iran. It has been on a far more aggressive program to expand its military footprint and [is] taking a series of increasingly hostile actions,” she said. While “the United States would not condone” the potential purchase of Chinese equipment by Riyadh, Coates said that “our main concern would be elsewhere.”

Coates did mention China’s increased economic interest in Israel as a potential point of concern. She noted that investment from Beijing in Israel had “grown by ten times in 2016 alone,” with venture capital funding increasing by almost 20 percent in 2018. “China is attracted to many of the same things in Israel that we are,” she explained. “Our goal is to make sure that that investment… continues to develop in a responsible way that is mindful of Israel’s national security intertest.”

She clarified that the United States is not saying “no China” to Israel, but rather suggesting that the Israeli government implement some of the same foreign investment screenings and security tools that Washington has employed to protect its national security interests.

These tepid US reactions to Chinese arms sales and potential economic investment vary greatly from the Trump administration’s strong opposition to Turkey buying the Russian S400 missile system and the possibility that European allies will use technology or equipment from Chinese telecom giant Huawei. This is partly due to differing interests in the region for both countries, according to Degang Sun, a visiting Chinese scholar at Harvard University. “China has substantial geo-economic interests in the Middle East,” such as the need to import energy from the region and the desire to include many Middle Eastern countries in the Belt and Road Initiative, he explained. The United States, on the other hand, “has very substantial geopolitical interests in this area” due its military presence and political interests in maintaining stability and countering Iran, according to Sun.

Beijing also mainly deals with many of the same partners as Washington, Sun said, including the Gulf countries, Israel, Jordan, Egypt, and Morocco. Rather than competing with Washington for different aims, however, both powers have largely been able to coexist in this context. Sun pointed to the example of Djibouti, where the United States, China, and European countries all have bases in order to protect trade routes from piracy and protect supply lines.

Going forward in the Middle East, Sun argued, “the problem is not outside competition or rivalry,” but rather that “no country will be willing to make a contribution to the governance of the Middle East.” Continued geopolitical tensions between Iran and its neighbors, overpopulation, brain drain, and poor economic interconnectivity will mean that the region “will have more security problems,” he said. Unfortunately, he added, “the United States has the capability to take care of the Middle East, but it does not have the willingness,” after decades of war in Afghanistan and Iraq. Conversely, he said, “China has neither the capability nor willingness,” to take responsibility either.

Sun thinks this provides an opening for cooperation, moving “from power-sharing to burden-sharing.” As both countries continue to be involved in the region, a more cooperative approach between both actors could lessen the burden borne by each in helping the region navigate instability.

Sun’s optimism could be justified in the Trump administration’s attempt to reach a deal with Beijing on the many points of economic and political contention between both sides. The administration, Coates said, is “hopeful that we will be able to come to a negotiated agreement that will allow this relationship to emerge in the twenty-first century as a strong and powerful one.”

Should this vision come to fruition, one of the first arenas for this new partnership could be the Middle East, potentially a new arena for cooperation, not competition.