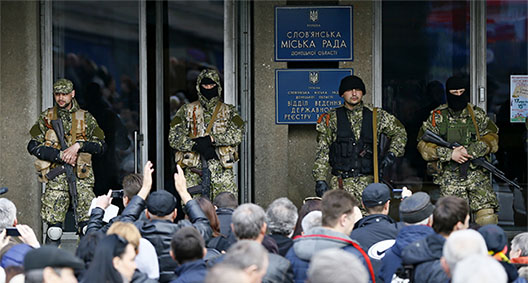 Russia has invaded Ukraine. This is the only conclusion to be reached from evidence that has built up in the past few days.

Groups of armed men wearing soldiers’ uniforms and working in military formations have fanned out throughout Donetsk province (oblast), and to some extent the adjoining Luhansk province, taking over police stations, Ukrainian Security Service regional offices, and government buildings. Ukrainian security forces began what they labeled an anti-terrorist operation Sunday and casualties on both sides are beginning to mount.

These highly militarized and anonymous attackers are following a pattern highly similar to the early stages of the invasion of Crimean by Russia last month. US ambassador to Ukraine Geoffrey Pyatt posted in a Twitter message Sunday:

Militants in eastern #Ukraine were equipped with Russian weapons and the same uniforms as those worn by Russian forces that invaded Crimea.

As it did on Crimea, the Russian Foreign Ministry is denying that the “green men” – so labeled for their crisp, identical camouflage fatigues and helmets – are from Russia. Moscow says the attackers are local residents of Donetsk and Luhansk who are angry that “fascists” have come to power in the Ukrainian interim government.

Ukraine’s State Security Service (SBU) has posted on YouTube audio of telephone conversations that it says link the attackers to Russia’s military intelligence agency, GRU. Numerous press reports and videos shot by local residents show that the attacking soldiers are very well trained, do not speak with local accents, seemingly don’t know their way around, and are very well trained. The “green men” are professionals, not the self-defense volunteers who organized themselves last winter amid the Euromaidan pro-democracy demonstrations in Kyiv. Accoridng to Ukrainian Interior Minister Arsen Avakov, some of the attacking soldiers are armed with late-model, Russian-made AK-100 assault rifles, a weapon that Ukrainian forces do not have.

The immediate goal is to derail the May 25 presidential election by preventing voting in major eastern Ukrainian urban centers, thereby reducing the legitimacy of the elected president. An election that was judged successful and democratic would end all claims to authority by ex-President Viktor Yanukovych, whom Russia continues to wheel out to the press as the “legitimate Ukrainian president.”

Russia also aims to derail the four-way (Russia-Ukraine-EU-US) talks set for April 17 in Geneva on the crisis over Russia’s seizure of Crimea. Russian Foreign Minister Sergei Lavrov warned that Russia would pull out of those talks if Ukraine used force against the separatists. While Ukraine has been restrained, even passive, toward the platoons of “green men,” it had no choice but to act after the seizure by soldiers of Donetsk towns.

Third, Russia aims to detach the eastern and southern regions of Ukraine, in effect amputating the country’s major industrial and port regions. Russia now is in position to turn southeastern Ukraine into a “frozen conflict” – a region whose status it holds unresolved through its backing for secession. That has been the condition of the Moldovan region of Transnistria for twenty-two years. In southeast Ukraine, Russia likely would exercise indirect control through Mikhail Dobkin, the Party of Regions presidential candidate. Moscow currently uses Transnistrian politician Igor Smirnov in the same role.

The West has done very little to dislodge Russian control over frozen conflicts in place since the early 1990s in both Moldova and Georgia.

Fourth, Russia could annex the region following the same pseudo-legal steps it used to declare its authority over Crimea.

First, the aim of the “green men” is to mobilize support for separatism in Russian-speaking eastern and southern Ukraine opinion, but polls do not give high levels of support for either federalism, a strong Russian demand, or for union with Russia. In a poll conducted by the Kyiv-based Democratic Initiative foundation, only 6 to 7 percent in eastern and southern Ukraine support their region’s separation and union with Russia. That support reaches its high, 18 percent, in the Donbass region, in the far southeast. Nowhere does secession have majority support.

Second, Ukraine ultimately will fight for its eastern regions, meaning there will be high numbers of casualties on both sides.

Russia has launched the unthinkable in Europe, a war by proxy with Ukraine that, in the long run, it can only lose. Former US Secretary of State Strobe Talbott put it well on Twitter.

If war breaks out between Russia & Ukraine, Putin will be to the former USSR & Russia what Milosevic was to Yugoslavia & Serbia: a disaster.


Dr. Taras Kuzio is a research associate at the Canadian Institute for Ukrainian Studies and a non-resident fellow with the Center for Transatlantic Relations at the School of Advanced International Studies.