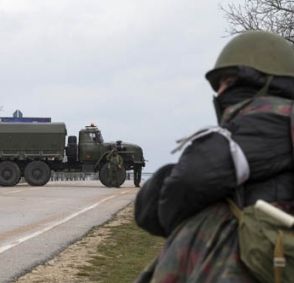 Transatlantic Allies Should Include Military Aid for Kyiv

News organizations last week reported a new conclusion by US intelligence agencies that Russian forces massed on Ukraine’s eastern borders are increasingly likely to invade mainland Ukraine, only weeks after seizing Crimea. Russian President Vladimir Putin is determined to undermine the political legitimacy of a Ukrainian government that has shown itself insistent on aligning with the European Union rather than Russia. And that means derailing the May 25 election in which Ukraine will certainly choose a president who would pursue that European option. A successful election would unravel Putin’s argument that Viktor Yanukovych, who fled Ukraine last month into Russian exile, remains Ukraine’s legitimately elected president.

The bulk of Russia’s forces comprise motorized brigades, special forces and airborne troops whose purpose would be a rapid advance to seize key industrial cities such as Kharkiv, Donetsk and Zaporizhzhya. Admiral Ihor Kabanenko, former first deputy chief of Ukraine’s armed forces general staff, says Russia has concentrated “offensive power” at the border and in Crimea with a “range of action covering the whole territory of Ukraine.”

Time is pressing and the US and its Canadian and European allies should undertake four steps to support Ukraine.

First expand the lists of sanctioned Russians to include Putin, the entire Russian leadership and oligarchs. The list of Ukrainians should be expanded to include oligarchs who were close to and financially benefitted from ex-President Yanukovych’s regime. Gas tycoon Dmytro Firtash was detained in Vienna and is awaiting deportation to the US on bribery and corruption charges. Like Firtash, Donetsk oligarch Renat Akhmetov financially gained from the Yanukovych regime, which both men supported to the end.

Second, NATO and the European Union should offer clearer, faster opportunities for membership to the countries bordering Russia that are seeking it. While NATO formally declares its open-door policy for membership, the alliance has admitted no new members since 2009. The EU has failed to offer membership to participants in its Eastern Partnership program, and should do so for Ukraine, Georgia and Moldova when those countries formally sign the full EU Association Agreements they have negotiated.

Third, Ukraine has for two decades maintained a high level of cooperation with NATO through the alliance’s Partnership for Peace (PfP) program. In 1997 it signed the NATO-Ukraine Charter on a Distinctive Partnership. These long-established security ties to NATO, coupled with the security guarantees signed by the United States and the United Kingdom in the 1994 Budapest Memorandum could be legal grounds for the supply of military defensive equipment and supplies to Ukraine’s National Guard, airborne forces and Border Guards, who would be in the frontline facing a potential Russian invasion.

As Atlantic Council Senior Fellow Ian Brzezinski has written, the US should supply anti-tank and anti-air equipment. US special forces personnel should be sent as trainers. The United States and NATO should share intelligence and surveillance on Russian military plans and movements with Ukrainian military and intelligence agencies. Annual joint military exercises with Ukraine under NATO’s Partnership for Peace should be brought forward with the purpose of training Ukrainian forces to deter a potential Russian invasion – and to demonstrate to Russia a visible Western commitment to Ukraine.

Fourth, technical assistance should be provided to the Ukrainian government to Europeanize the bloated, incompetent and corrupt police, Ukrainian Security Service (SBU) and prosecutor-general’s office. This should aim to introduce democratic controls, reduce manpower and weed out corrupt officers, including those working for Russian intelligence. NATO’s Partnership for Peace has a good track record of helping to reform Ukraine’s military, an effect that may be seen in the army’s refusal, both in the 2004 Orange Revolution and in the past four months’ Euro-Maidan upheaval, to back up police special forces in violent repression of protesters or in instituting a state of emergency.

In the Ukraine crisis, the West must formulate its response to the most blatant act of aggression against a neighbor since the 1930s. The steps outlined above would stiffen what so far has been an inadequate response, especially on the part of Western Europe and the EU. Europeans have justified their hesitations to sanction Russia by noting that they have closer financial, trade and energy links to Moscow.

But they also have far more to lose if Ukraine is the scene of a bitter conflict that would spill over into neighboring states (Moldova being most at risk) and cut gas supplies to Europe. Two-thirds of Russia’s gas exports are sent via pipelines through Ukraine.  Refugees from Ukraine would flood into four EU and NATO neighbors on Ukraine’s western borders. And make no mistake: War is what will erupt if the Russians enter eastern Ukraine. While Ukrainians did not fight for Crimea, they would combat a Russian move into the east, which would threaten their independence. Any conflict would be long and would include both conventional and guerrilla warfare in Ukraine and in Russian-occupied Crimea, where the Tatar minority will not be reconciled to Russian rule. (Crimean Tatars have a vivid memory of Moscow’s 1944 mass deportation of their entire community to Central Asia, a genocidally tinged atrocity in which half of their population died.)

Within the United States, some Republicans, such as Senator John McCain, have urged a tougher response than that taken by the Obama administration. Still, the GOP is itself divided on foreign policy issues between hawks, realists and libertarians.

There is still time to rectify the weak Western response to Russia’s brazen annexation of a sovereign country’s territory and threat of full-scale invasion. All that is needed is political will and leadership by the US, Canada and EU and a re-affirmation of their commitment to shared values and international agreements.

Dr. Taras Kuzio is a research associate at the Canadian Institute for Ukrainian Studies and a non-resident fellow with the Center for Transatlantic Relations at the School of Advanced International Studies.