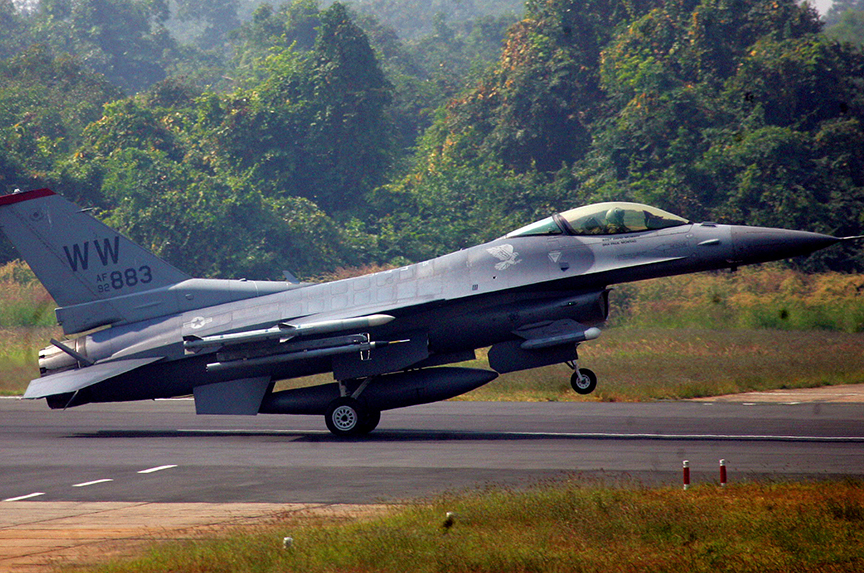 A US F-16 aircraft makes a landing during joint US-India air force exercises at the Kalaikunda Airbase west of Kolkata, India, on November 17, 2005. (Reuters/Jayanta Shaw)

In August 2017, US President Donald J. Trump signed into law the Countering America’s Adversaries Through Sanctions Act (CAATSA), a bill designed in part to sanction countries doing business with Russia’s defense industry. Like some other US partners, India is at risk of CAATSA sanctions because the bulk of its defense inventory is from the former Soviet Union and it maintains substantial defense ties with Russia.

There is some confusion about the precise metrics that would trigger the sanctions, their consequences, and how India might obtain a waiver or delay where applicable.

In an interview with Bharath Gopalaswamy, director of the Atlantic Council’s South Asia Center, Vivek Lall, vice president of strategy and business development at Lockheed Martin Aeronautics, discussed the trajectory of the US-India defense relationship and the progress made by both these countries to advance their engagement. Lall is leading Lockheed Martin’s bid to establish an exclusive F-16 production line in India and build F-16s for the Indian Air Force and export customers.

Lockheed will offer the Indian Air Force F-16s equipped with the latest target-tracking technologies that are fitted on the F-35, its fifth-generation combat jet. The bid comes with an offer to shift Lockheed’s only production line for F-16s to India. The Indian Air Force will accept bids until July.

Here are excerpts from the interview.

Q: Give us your overview of how the threat perceptions are evolving as far as the United States and India are concerned. How are the United States’ and India’s strategic interests convergent and where do you see the complementarities?

Lall: The United States and India are natural partners with shared interests across myriad political, economic, and security issues. A stable and prosperous Indo-Pacific is vital to the security and economic prosperity of both India and the United States. A rules-based international order, freedom of navigation, and defense partnerships are all key to stability in the region. Several recent developments reflect these shared priorities.

In 2012, the US Department of Defense and the Indian Ministry of Defense established the Defense Technology and Trade Initiative (DTTI) to strengthen industrial cooperation. The DTTI was established to identify opportunities to advance defense technology sharing, science and technology collaboration, and industrial partnerships on defense-related co-development and co-production business opportunities.

In June 2016, the United States designated India as a “Major Defense Partner”—a status unique to India. The designation is intended to elevate defense trade and technology sharing with India to a level equal to that of the United States’ closest allies and partners. This is another significant and encouraging development for US-India relations and the Indo-Pacific region.

An F-16 partnership is a clear win-win for the United States and India on multiple fronts. The proposal—to produce F-16s exclusively in India for the Indian Air Force and export customers—provides a unique path to closer US-India cooperation on advanced technologies, including but not limited to fighter aircraft.

Q: What do you make of both the Make in India and Make America Great Again policy frameworks? A recent report released by the Atlantic Council concluded that these policies are more complementary than contradictory. Could you also highlight this in the context of the F-16?

Lall: F-16 production in India creates several thousand new manufacturing jobs in India and supports thousands of Lockheed Martin and F-16 supplier jobs in the United States. Only the F-16 program has the scale and proven performance to achieve Make in India priorities [championed by Indian Prime Minister Narendra Modi], support US and Indian jobs, and position Indian airpower for the future.

The F-16 Block 70 enables India to quickly recapitalize its single-engine fighter fleet with advanced capabilities and strengthen the strategic relationship between the Indian Air Force and the US Air Force. The F-16 also provides a path toward future US-India cooperation on other advanced technologies and mutually beneficial industrial partnerships.

Q: How does Lockheed Martin intend to work with its interlocutors to ensure that these capabilities are delivered in a time-bound manner?

Lall: We value our relationship with both governments and will continue to support US government efforts to provide India the capabilities it needs and develop mutually beneficial partnerships that strengthen political, economic, and military ties between the United States and India.

Q: What are the challenges to an increasing US-India defense partnership that you see in the short, medium, and long term? With CAATSA in effect since August of last year, what changes can be expected in Lockheed Martin’s approach toward ensuring a successful US-India defense relationship?

Lall: Large defense procurement programs are inherently complex due to their national security implications, geopolitics, and the significant investments associated with acquiring new military systems and capabilities. This leads to protracted procurement decision timelines, which poses challenges to customers seeking new military platforms and the companies offering them. A great deal of strategic patience is required on all sides.