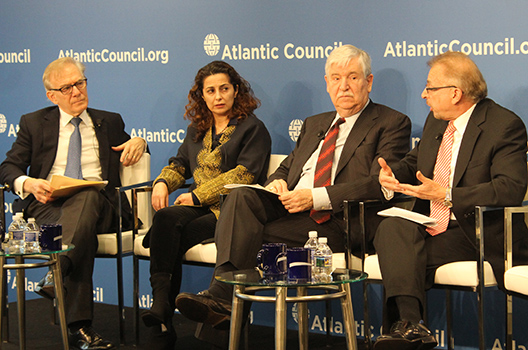 Rather than spend time contemplating regime change, the United States should attempt engagement with Iran, panelists said at the Atlantic Council in Washington on February 12.

Roundly criticizing any thoughts from Washington that it could pressure Iran enough to achieve regime change, Mohsen Milani, executive director of the University of South Florida’s Center for Strategic and Diplomatic Studies, said: “I simply do not see the conditions for another revolution.” He saw “no evidence that there is a social base in Iran that wants to see a radical change.”

Iranians, Milani argued, are even less likely to embrace radical change now as they witness the negative results of regime change in its neighborhood and beyond.

Milani spoke at a daylong conference—”Iran’s Revolution Turns Forty”—jointly hosted by the Atlantic Council and the University of South Florida. He was joined in a panel discussion by John Limbert, a former deputy assistant secretary of State for Iran, and former New York Times journalist Nazila Fathi. Washington Post columnist David Ignatius moderated the discussion.

The Islamic Revolution was a popular uprising in Iran that resulted in the toppling of the monarchy and the establishment of an Islamic republic in 1979.

A more effective strategy, Milani andLimbert maintained was a reversion to the Obama administration’s engagement with Tehran. US diplomats at that time had “no illusion that the Islamic Republic was going to change into a place that treated its people better, that treated its women more decently,” Limbert explained. The goal instead, Milani said, was to begin a “ten-year period in which Iran gradually rejoined the international community,” including the strengthening of moderate forces within the regime.

Such a rapprochement would have coincided with the natural progression of the regime, argued Fathi, as “the Islamic Revolution is definitely at the end of its teen years, when it was rebellious and when it wanted to show an identity on the world stage. Those days are gone.”

Showing the regime at least a little bit of “respect,” Fathi said, could be pivotal as Iran transitions in the near term to another supreme leader and becomes a country in which the majority of the population has no recollection of the revolution years. Iran’s current supreme leader, Ali Khamenei, is seventy-nine years old.

Forty years after the Islamic Revolution, Iran is now entering a new phase of transition as “a new generation is going to come to power,” said Milani.

Milani said that the Trump administration’s hostility toward Iran and its decision to withdraw from the nuclear deal means that the “likelihood of another hardliner” replacing Khamenei “has increased exponentially as a result of this animosity between the United States and Iran.”

On May 8, 2018, US President Donald J. Trump pulled out of the multilateral nuclear deal with Iran, which he described as an “embarrassment.” In November, the United States reimposed all sanctions that had been lifted as a consequence of the deal.

Limbert downplayed the role of US sanctions and pressure, admitting that he was “not sure what the goal of the sanctions [is].”

The policies of isolation and sanctions only strengthen the hardliners in Iran, including the Islamic Revolutionary Guard Corps (IRGC), the panelists said. “After four decades we see that [the IRGC] thrives in isolation, it invites those kinds of policies. It invites sanctions, [which] empowers it,” Fathi said.

Limbert agreed, warning that now the IRGC is in a position “to play the key role” in selecting the new supreme leader as Washington has effectively abandoned the reformists who “are the only ones that have the ability to contain radical forces in Iran.”

Milani said he believes Iranian President Hassan Rouhani would consider returning to the negotiating table with the United States once it is clear whether Trump is re-elected in 2020. Eventually, Milani argued, negotiations will have to resume, because Tehran simply has “no choice.”

Limbert, who was held captive at the US Embassy in Tehran during the hostage crisis, argued that US-Iranian relations have remained hostile because “people on both sides didn’t know how to do anything else.” In the decades following the revolution, both Washington and Tehran had “learned to bash the other side,” Limbert explained, “[but] when it came time to do something else, to look at exploring common areas…people just didn’t know how to do it.”

The panelists lamented the breakdown of US-Iranian ties at a time when Iran “socially…is a very different country than it was ten years ago,” according to Fathi.

Barbara Slavin, director of the Atlantic Council’s Future of Iran Initiative, said in introductory remarks that “while photos in the Western press still show bearded clerics and women in black shouting ‘death to America’ those of us who have been to Iran in recent years know that the society has changed profoundly and that its government has been forced to accommodate a younger generation that is, if anything, more ‘Westoxified’ than prior to the revolution.”

Limbert was quick to point out that “the Islamic Republic is already changing without much help from the outside.”

Fathi agreed noting profound changes in everyday Iranian life in the last ten years, including more instances of citizens defying bans on music and mandatory female headscarves. “It has been the Iranian people who have change the ways the Iranian regime acts,” Fathi argued, explaining that consistent protests in the last twenty years “were all ways for the Iranian people to communicate with Iranian leadership to send their messages.”